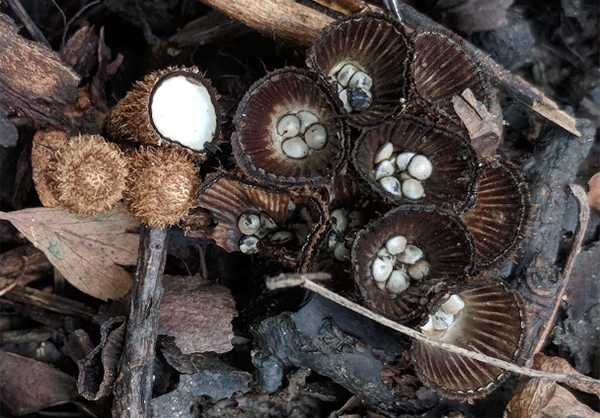 Article by: Nattapol Kraisitudomsook, PhD student from the Smith Lab at the University of Florida

Despite the name, bird’s nest fungi have little to do with birds or nests. In fact, these tiny mushrooms got their common name from their resemblance to bird’s nests. You might have seen them in your backyard or come across them on your hiking trails. Bird’s nest fungi are unique in both appearance and dispersal mechanism. If you take a closer look at them, you will notice several ‘eggs’ inside each ‘nest.’ These ‘eggs’ contain millions of fungal spores that will disperse and grow into a new fungal individual. Therefore, it is not entirely inaccurate to call them nests and eggs after all.

Although they appear quite different, bird’s nest fungi are actually related to the common fungi that we find in supermarkets e.g. button (Agaricus bisporus), shitake (Lentinula edodes), and oyster (Pleurotus ostreatus) mushrooms. They all belong to the same order of fungi called ‘Agaricales’ or gilled mushrooms. Like many of their relatives, bird’s nest fungi grow on decayed substrates such as mulch, leaf litter, logs, and sometimes on animal dung! They absorb nutrients from dead organic materials, and thus are what we consider as ‘saprotrophic’ or decomposers. 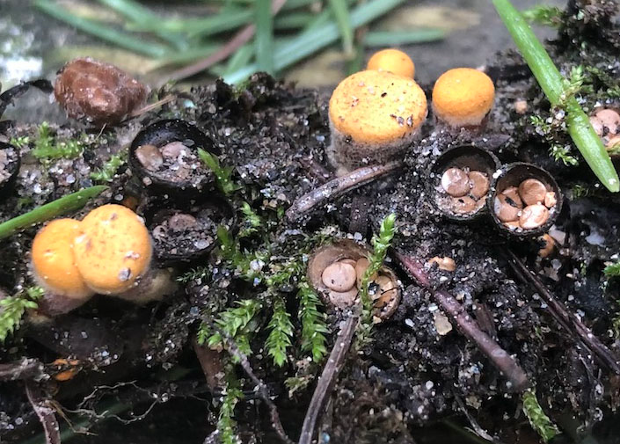 Bird’s nest fungi are highly diverse in their shapes and sizes (ranging from 1 mm to 10 cm in height). Some are cylindrical (cup-shaped), whereas others are globose (ball-shaped). It has been estimated that there are 350 species of bird’s nest fungi. Some species are globally distributed and can be found on all major continents except Antarctica. Not much is known regarding how they are able to disperse long distances. Nevertheless, the biggest mystery about bird’s nest fungi is how and when they arose. There are fossil records of bird’s nest fungi from 40-50 million years ago, but we still do not know when the first bird’s nest fungi evolved. Much more molecular data from these fungi are needed to answer this question. Ph.D. student Nattapol Kraisitudomsook and his advisor, Dr. Matthew E. Smith (Curator of the Fungal Herbarium at Florida Museum of Natural History), are currently investigating the biodiversity and evolutionary origins of these fungi.

One last note, you might have spotted bird’s nest fungi in your garden and wondered if they are unsafe to your pets or plants. Thus far, there is no evidence to suggest that these fungi are pathogenic or poisonous, so there is no need to remove them! On the contrary, bird’s nest fungi could be beneficial to your garden since they can decompose unwanted organic matter. If you would like to learn more about these fascinating organisms or have a collection to contribute, please contact Nattapol at kraisin@ufl.edu. 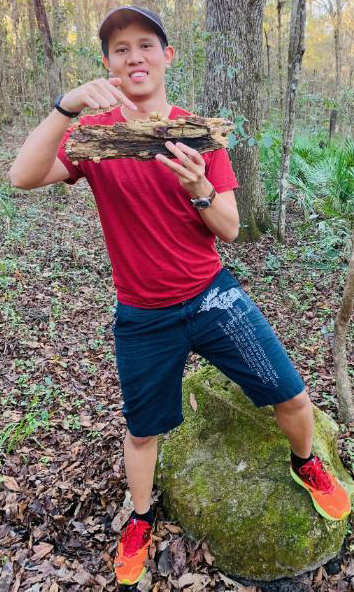 In January, iDigBio partnered with TESI and the Florida Museum on the SciComm 101 Workshop for University of Florida graduate students. Each participant pledged to partake in a digital storytelling opportunity.

Nattapol Kraisitudomsook is the second participant to submit a blog post. Nattapol is originally from Bangkok, Thailand. Currently, he is a Ph.D. student in the Smith Lab studying fungal systematics and evolution. In his free time, Nattapol likes to collect mushrooms, read, sing, and exercise.