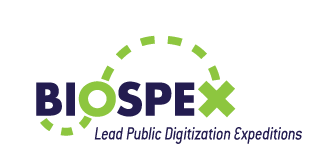 Over the past few centuries, professional and citizen scientists have amassed an estimated 3 billion biological specimens for research. Labels and notebooks associated with these specimens offer a rich source of information on past and present patterns of biodiversity—for example, what was where at particular times in the past and the life stage the organism had reached by particular points in the year.  These specimens offer a nascent source of "big data" that has yet to reach its potential because the data is largely stuck in the cabinets.  For example, just over 10% of the roughly 1 billion specimens in US collections have been "digitized" to make it available online.  Digitization most commonly involves digitally imaging the specimen, georeferencing the location of collection, and transcribining the specimen label into a database. Digitization of biodiversity collections allows researchers access to vast quantities of information in their investigations of timely subjects such as climate change, invasive species, and the extinction crisis.  It also opens that same resource to citizen scientists, educators, policy makers, and everyone else.

iDigBio is working to link the motivations of researchers, citizen scientists, and others with digitization tasks that produce data useful to them through development of the BIOSPEX public participation in digitization management system.  In collaboration with partners, BIOSPEX will provide those with digitization goals (including, for example, amatuer enthusiast groups) the capacity to package digitization tasks with compelling research or societal benefits, advertise those packaged tasks, and manage the analysis and movement of the generated data back to data management systems. Development partners include Zooniverse's Notes from Nature, Atlas of Living Australia's Biodiversity Volunteer Portal, GEOLocate, the Filtered Push project, Symbiota, and others. The new tool has been named BIOSPEX for BIOdiversity SPecimen EXpeditions. The idea of evoking expeditions comes from the Biodiversity Volunteer Portal. Expeditions can be circumscribed by, for example, state park of origin, decade of collection, famous collector, rarity, invasiveness or other quality.

In one target use case, a museum curator will be able to register digital images of specimens to the iDigBio Cloud and circumscribe the images as a set for transcription in BIOSPEX. The expedition is queued for transcription at Notes from Nature, and compelling advertisements for the task are created in BIOSPEX that are then shared with go-to websites for learning about citizen science opportunities. The transcriptions generated in an expedition are then processed in BIOSPEX and the data is returned to the local specimen management system.  The idea for BIOSPEX was originally proposed by Austin Mast (FSU, iDigBio) at iDigBio's 2012 Public Participation in Digitization of Biodiversity Specimens Workshop, where it was further refined by participants.  Parts of the project also benefited from the 2013 CITSCribe Hackathon, an event co-organized by Austin Mast and Rob Guralnick (University of Florida), and co-sponsored by iDigBio and Notes from Nature.