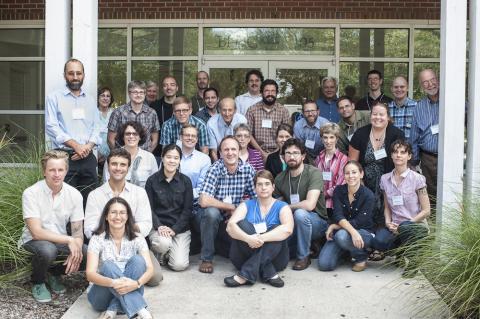 iDigBio’s Public Participation in Digitization of Biodiversity Specimens Workshop (September 28–29 in Gainesville, FL) brought together a unique combination of expertise—specimen digitization managers from the thematic collections networks (TCNs), biodiversity informatics software developers, citizen science coordinators, and members of iDigBio. After an overview of the two-day workshop for the 35 participants by co-organizers Austin Mast and Betty Dunckel, it kicked off with an excellent overview of NSF’s Advancing Digitization of Biodiversity Collections Program by program officer Anne Maglia, followed by an introduction to iDigBio by PI Larry Page.  Page also presented the video of a novel approach to crowdsourcing taxonomic identifications using Facebook by Brian Sidlauskas (http://vimeo.com/48909830).

The speakers who followed each represented one of the seven current TCNs: Tom Nash and John Brinda from the Lichens and Bryophytes TCN, Katja Seltmann from the Tri-trophic TCN, Julie Speelman from the InvertNet TCN, Barbara Thiers from the Macrofungi TCN, Patrick Sweeney from the New England Vascular Plants TCN, Melody Basham from the SCAN TCN, and Jonathan Hendricks from the PALEONICHES TCN (for more info on each, see https://www.idigbio.org/content/thematic-collections-networks). In addition to discussing ways to engage the public in digitization, Basham presented a very cool video by InsectArium on the use of augmented reality technology for insect identification (http://www.youtube.com/watch?v=STc8Nsx36MI). These presentations and the discussion that followed produced a list of steps in the digitization process that could involve the public.  The list included both onsite activities (e.g., digital imaging) and activities that could be completed anywhere that there is an internet connection (e.g., georeferencing and label transcription from online digital images). The TCN presentations were followed by an introduction to USGS’s Biodiversity Information Serving Our Nation (BISON) project and past USGS citizen science projects (such as the New York City Cricket Crawl) by Elizabeth Martin.

The next set of talks provided an overview of biodiversity informatics software that could be used to engage the public in digitization:  Nelson Rios spoke on GeoLocate’s Collaborative Georeferencing Tool, Jim Beach on Specify and Lifemapper, Ed Gilbert on Symbiota, Michael Giddens on HelpingScience.org, Michael Denslow on Notes from Nature, Jason Best on Apiary, and Paul Flemons on Atlas of Living Australia’s (ALA’s) Volunteer Portal. Many were impressed with the flexibility of ALA’s approach to creating virtual “expeditions” for various tasks and its success with engaging large groups of volunteers. Presentations and discussion produced a list of communities to engage in digitization and their motivations.

The final set of talks on the first day focused on methods to successfully engage the public in science.  Andrea Wiggins from DataONE and Cornell’s Lab of Ornithology started the section by presenting several ways of classifying citizen science projects, which provided schemes for thinking about how engagement might vary systematically across citizen science projects.  Jessica Zelt from the USGS’s North American Bird Phenology Program and Nathan Wilson from the Mushroom Observer and Encyclopedia of Life provided the volunteer-engagement strategies from a pair of mature projects with 1000s of participants.  Both emphasized the importance of tools for community building among participants (e.g., newsletters or forums).  Zelt also mentioned that a leader board for recognizing the most active contributors is easy and can provide substantial incentive to a project’s most engaged participants.

Socializing and citizen science discussion continued into the evening as part of a dinner at the Florida Museum of Natural History. Participants were able to wander through the museum before and after dinner. Richard Primack from Boston University followed dinner with an inspiring talk about how biodiversity specimens and, especially, historical observations made by the public can be used in the study of global change.

Bill Watson, Chief of Onsite Learning at the Smithsonian Institution, began the second day with an overview of reasons the public should be involved in science, underscored by a set of activities and models being used at the Smithsonian. He emphasized the role that citizen science has in the democratization of science.  Next, Greg Newman spoke on resources available to new citizen science projects with a special focus on those available through his CitSci.org project. CitSci.org provides a flexible set of online tools for managing citizen science projects, making the creation of new projects easy.

In the afternoon of the second day, small groups formed around discussion topics that were meaningful to them, with presentations of the topics to the whole group prior to a break.  After break, there was another round of discussions and presentations.  The two main discussion topics were (1) the architecture necessary to connect the digitizing projects with the tools and the communities interested in participating in digitization and (2) informal education opportunities in digitization workflows.

Visit the workshop wiki page (https://www.idigbio.org/wiki/index.php/IDigBio_Public_Participation_in_D...) for links to the final agenda, the GoogleDoc, and the presentations.