Specimens are, in many ways, like books written in languages we are still learning. New technologies like DNA analyses, high-resolution CT scanning, and modern chemistry are providing ways to “read” the complex information stored in specimens. They tell us more about their evolutionary relationships, their health, interactions between species, and the conditions of the environments in which they lived. The value of specimens thus appreciates every time a new technology opens doors allowing them to be “read” in new ways. New technologies have similarly revolutionized how the cataloged data about specimens – where/when they were collected, who collected them, size, maturity, sex, etc. – are stored and made available. Conversion of initially hand-written museum catalogs to digital databases in globally standardized formats enabled open sharing, and in turn analysis by powerful computers. Suddenly ecologists became major users of specimen-based data, providing insights into how ecosystems work and are changing. Recent initiatives like the Extended Specimens Network are aiming to connect specimens to data derived from them to other relevant data, creating a data network facilitating complex analyses.

However, the way these now more-valuable-than-ever physical collections of specimens are stored has hardly changed over all those years. Yes, environmental conditions have improved, with temperatures and illumination now controlled in ways that increase specimen life and quality. But the way specimens are arranged in natural history collections is deeply rooted in tradition and almost universally accepted among specimen collections, changing little since they were first placed on shelves hundreds of years ago. Specimens are arranged taxonomically, all jars of a species together alongside their closest relatives, with spaces left empty after each species for new specimens to be added. This system evolved primarily to facilitate “old-school” taxonomic study. Anyone describing a new species needed to compare their specimens to all of its close relatives, so having them all in one small part of the collection was convenient. Our own fish collection has been arranged taxonomically since inception, 73 years ago. As we grew, the inevitable filling of those gaps left for growth forced us to shuffle jars of adjacent species to make space. Sometimes we’d move hundreds of jars to accommodate a few dozen new ones. We began to see this way of arranging jars as a significant efficiency problem.

Given budgetary and other obstacles to getting more space or installing compactorized shelving, and with the space squeeze significantly affecting our productivity, our first thoughts were to conserve or create “new” space. For example, in the field, we became less likely to keep large specimens, often releasing them, or if we did keep them, we’d consider keeping only the head or other parts. That countered our long-standing attempts to rectify the obvious historic bias in our collection against large-bodied species. 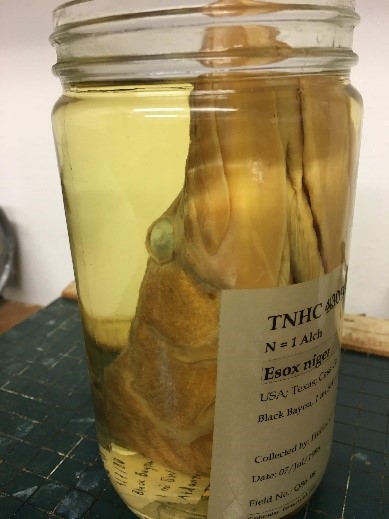 TNHC 44309, Chain pickerel (Esox niger) from Cass County, Texas. Example of preserving a part of an individual to save space. The complete specimen would have filled at least a gallon jar, but its head alone fits into a quart. Although the specimen identification can be made with a head only, this limits greatly the potential research value of the specimen.

Fishes are stored, sometimes rather inefficiently, in “lots” – all specimens of a species collected at a point in space and time into one container. Thus, a single small specimen can consume an entire jar that could otherwise hold hundreds of specimens. To better utilize wasted space we laboriously vialed single small specimen lots and combined them into multi-lot quart jars (up to 30 vials each) and multi-lot tanks for larger specimens (up to 65 specimens each). That massive effort resulted in 5,352 lots (8% of the total collection) moving to multi-lot containers of some sort. Next, we moved a large subset of our collection to a nearby building lacking the environmental controls in our primary building. We also started packing our smallest jars (8 oz) into high-density boxes and stacking them on dollies in aisles. Then, we filled space freed up by the removal of an entomology collection from our building. 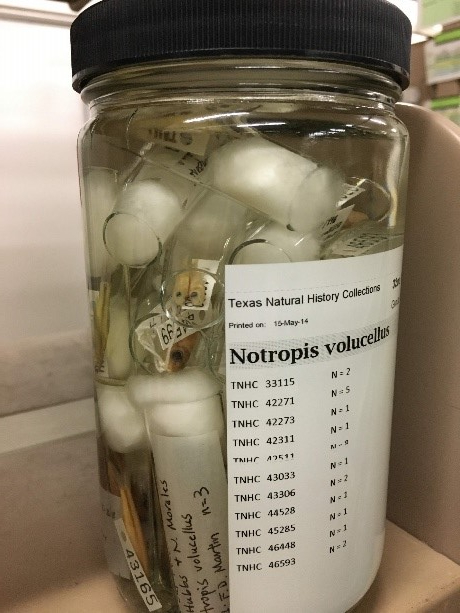 Example of a multi-lot quart jar holding Mimic shiner (Notropis volucellus) specimens that were once housed singly in approximately two dozen 8 oz jars. This saves space, but is very time consuming to do, increases the possibility of data loss, and takes longer to retrieve and shelve.

Our collection is now spread across four spaces in two buildings. Although we do not regret those actions, because they allowed us to continue growing, each method used to gain space is flawed in one way or another. Collection management is now complicated by fragmentation. Though three of the four spaces retain the same taxonomic ordering arrangement, specimens of virtually every species are now in at least two (and most in three) different places. Housing specimens in separate buildings doubles the effort required for monitoring environmental conditions and coordinating maintenance. Plus, supplies like spill kits, extra jars, ethanol, broken glass disposal containers, step ladders etc., are doubled to satisfy requirements in both buildings. As for multi-lot jars, not only does their creation take considerable time, it also introduces possible errors, allowing for the opportunity to lose original jar labels (which can’t fit into vials), and now makes specimen retrieval and re-shelving more time consuming. Multi-lot tanks now clog up aisles and hallways. While we have saved space, the workload for collection managers, curator and staff has increased as a result of the move. Still battling space, and assuming it might be some time before we’d get more, we concluded that we needed to be even more creative about resolving our space problem.

It took us a while to start thinking “out-of-the-box” about some of the most basic and ingrained traditions. But, after many years of battling space limitations and considerable wracking of brains, we realized that our active and nearly exponentially growing collection (>72,000 lots) would be a perfect test bed to conduct an assessment comparing the taxonomic arrangement of jars to a more space-efficient arrangement. The new system requires that jars be placed on shelves in catalog number order and maximizes space by co-shelving jars of the same size only. The elimination of spaces resulting from variable sized jars being co-shelved allowed us to hold an additional 24 jars per square meter of shelf space. In addition to space savings, there are other benefits, and a qualitative comparative assessment of fourteen tasks we routinely perform in our collection revealed that the catalog number ordered section of jars out performed the taxonomic system in nine of them, while the taxonomic arrangement outperformed in four. One task we could not determine an advantage.

We are becoming convinced this system will conserve space, reduce shelving errors, and increase overall work efficiency. There are some disadvantages, but overall, we find ourselves leaning (admittedly with some trepidation) toward eventual conversion of our entire collection to this system, despite the considerable effort that would entail. We prepared an early draft manuscript and invite comments from colleagues. Please use this link to get to it, and this link to a form where you can submit your thoughts that will allow us to improve the manuscript. Thanks in advance for your help.

Taxonomically arranged shelf (after spaces for growth between taxa were removed). Notice that space is wasted by co-shelving jars of various sizes. 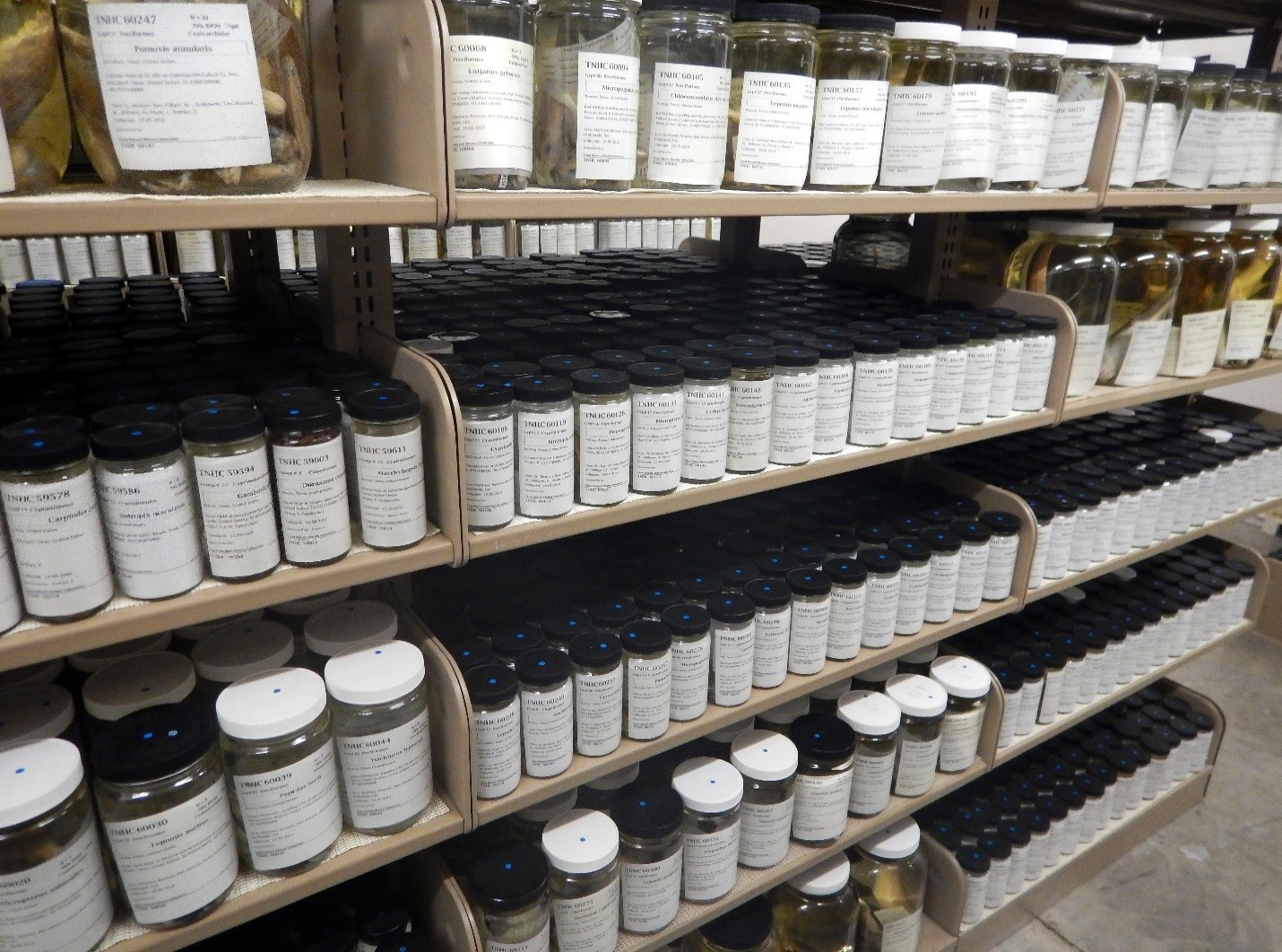 Catalog number ordered shelves. Little space is wasted when jars of the same size are on each shelf.

This piece was re-published with permision from the University of Texas at Austin Biodiversity Blog. The original can be found here.