Whilst working as a research assistant within the Spatial Ecology and Epidemiology Group (SEEG) at the University of Oxford, I was exposed to the utility of statistical modelling to predict disease distribution and prevalence. This area of research appears to be an ever-growing field, with recent developments in geostatistical methods and technological advances enabling the collection and processing of high-spatial and temporal resolution remotely sensed data and large occurrence datasets - paving the way for the construction of complex models of disease distribution.

My own interest in the topic of snakebite led to the development of a project applying methods previously used to map the spatial distribution of several key tropical diseases such as Malaria, Dengue and Yellow Fever and their vectors Anopheles and Aedes, to generate estimates of the populations most vulnerable to the worst outcomes of snakebite. Snakebite is responsible for 81 000–138 000 deaths annually arising from between 421 000 and 1.2 million envenomings. Due to the severity and burden of this disease, snakebite has recently been declared as a “global public health emergency”, and, as of June 2017, is now classified as one of 20 neglected tropical diseases (NTDs) according to the World Health Organisation (WHO). 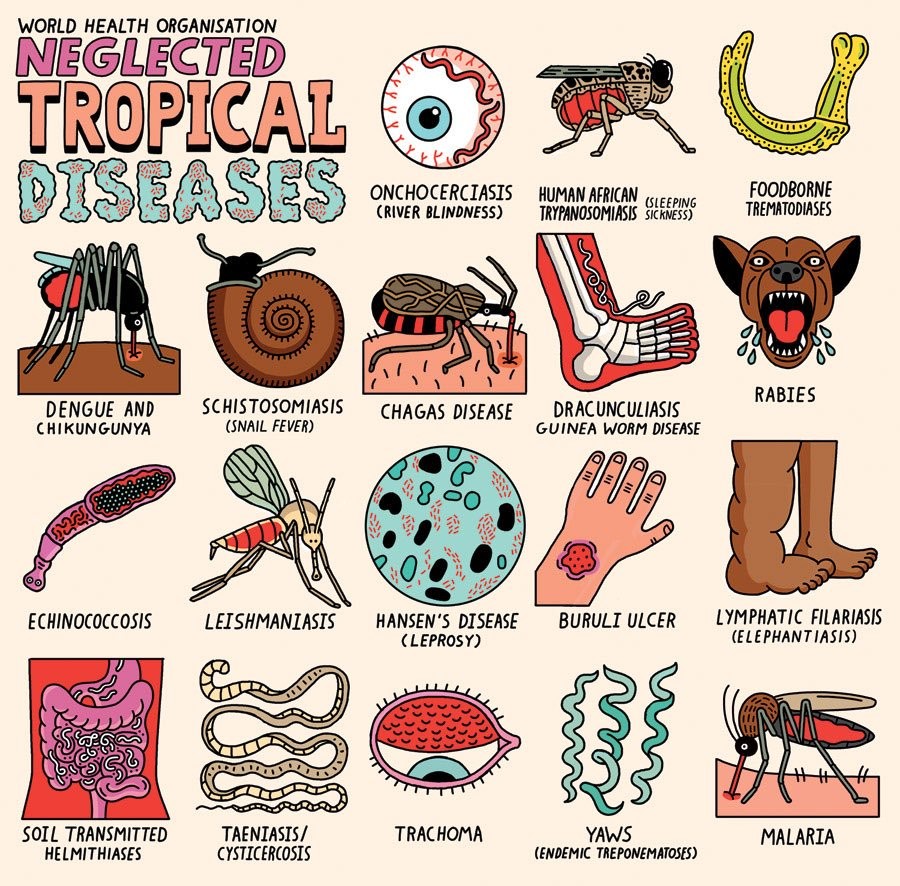 As a first step toward estimating vulnerable populations, we collated information on the distribution of medically important snake species. The World Health Organisation (WHO) maintains a database categorising snake species based on their severity and burden, within which there is information on previous taxonomic names, types of effective therapy and expert opinion range maps (EOR) (maps showing coarse boundaries) for each medically important species. For the first stage of our study, we opted to utilise the data available on this database. 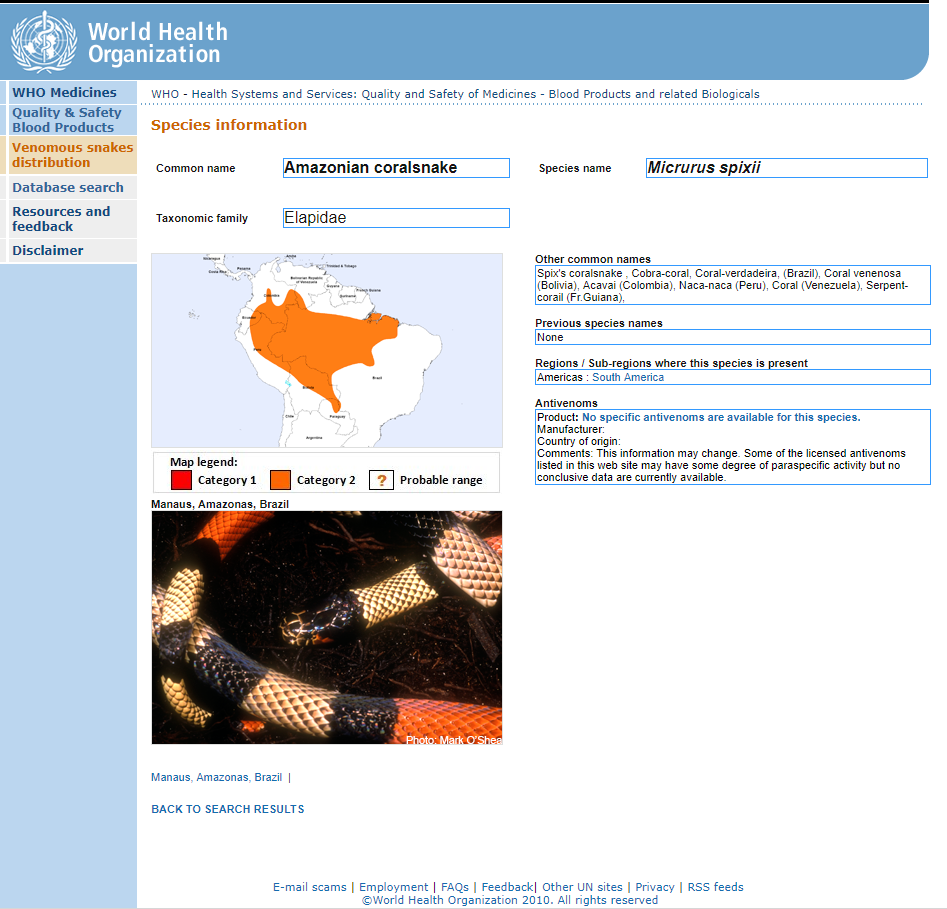 Example entry available on the WHO snake antivenoms database.

Maps provided through this resource were produced during 2008 and 2010, and due to recent taxonomic changes and the wealth of publicly available occurrence records (through online resources such as iDigBio), we sought to produce updated ranges for each species. To create contemporary species ranges, we digitized WHO maps for 278 medically important snake species, and obtained a total of 68 615 occurrence records from Integrated Digitized Biocollections (iDigBio), the Global Biodiversity Information Facility (GBIF), iNaturalist and other default repositories through utilisation of the `spocc` package in R.

These species occurrence records, alongside digitised range maps and remotely sensed data covering a range of environmental variables, were used to inform a Multivariate Environmental Similarity (MES) analysis. Briefly, for each species, we constructed a model fit to occurrence records within the currently accepted range of each species. This model was used to identify environmentally similar locations to those within the species’ range, by analysing climatic and environmental values at each occurrence location informed by the remotely sensed data. This process resulted in predictions of areas of environmental similarity (termed interpolation), and areas which were environmentally dissimilar to the 2008-2010 estimated range (termed extrapolation). These predictions were then used as a means of validating new (post 2010) occurrence records from online repositories, positioned outside of the previously accepted range. Through this method, we identified 96 snake species requiring an updated range assessment (34.5% of species included in the analysis). 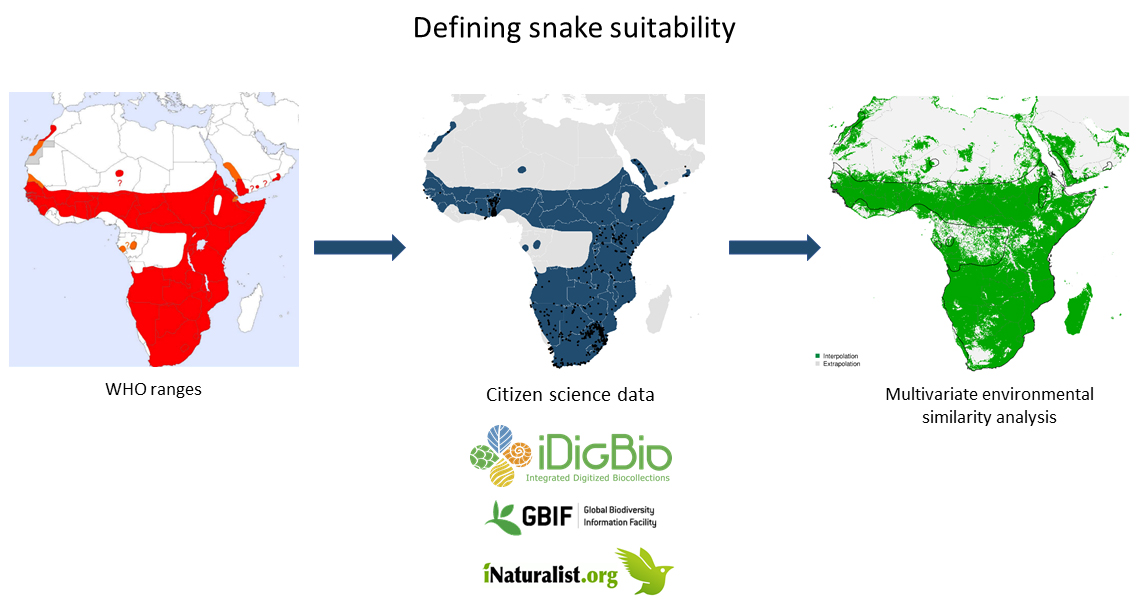 To visualise the global distribution of medically important snake species, digitised and modified range maps were stacked to identify areas of high diversity. This ecological surface, although alone not indicative of snakebite risk, was used within our analysis alongside other metrics to quantify populations vulnerable to the worst outcomes of snakebite. 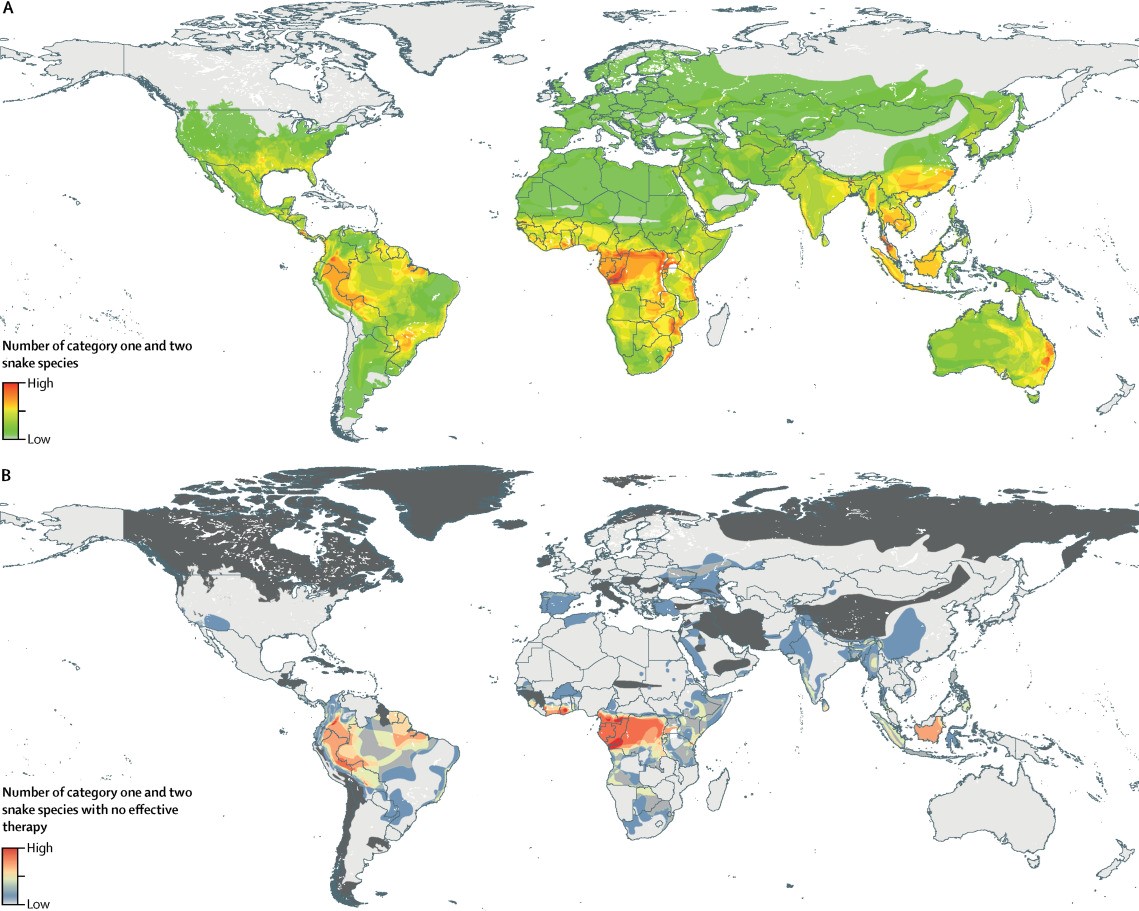 The medically important snake ranges were coupled with information on the availability of effective antivenoms, as published within the WHO database. This allowed for the identification of geographic areas lacking effective treatment for native species. By coupling these two spatial surfaces with contemporary information on human population density (as compiled by the WorldPop project), information ranking the quality of each countries health care (the Healthcare Access and Quality Index), and information on  travel time to cities, representative of travel time to treatment, we created bespoke estimates of vulnerability. 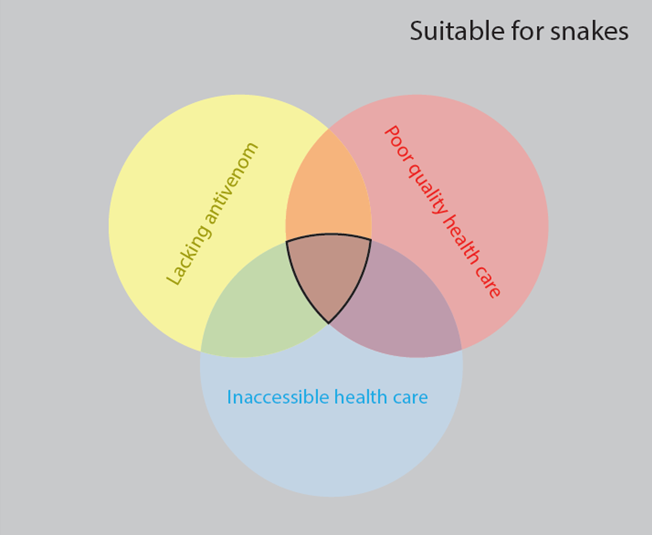 Although about 6.85 billion people worldwide live within the range of areas inhabited by medically important snakes, 10·95% of these individuals live more than 1 hour from population centres. Our analysis shows that antivenoms exist for 119 (43%) of 278 snake species evaluated by WHO. Through the coupling of each specific metric, we identify 92·66 million people living within the most vulnerable geographies, including many sub-Saharan countries, Indonesia, and other parts of Southeast Asia. 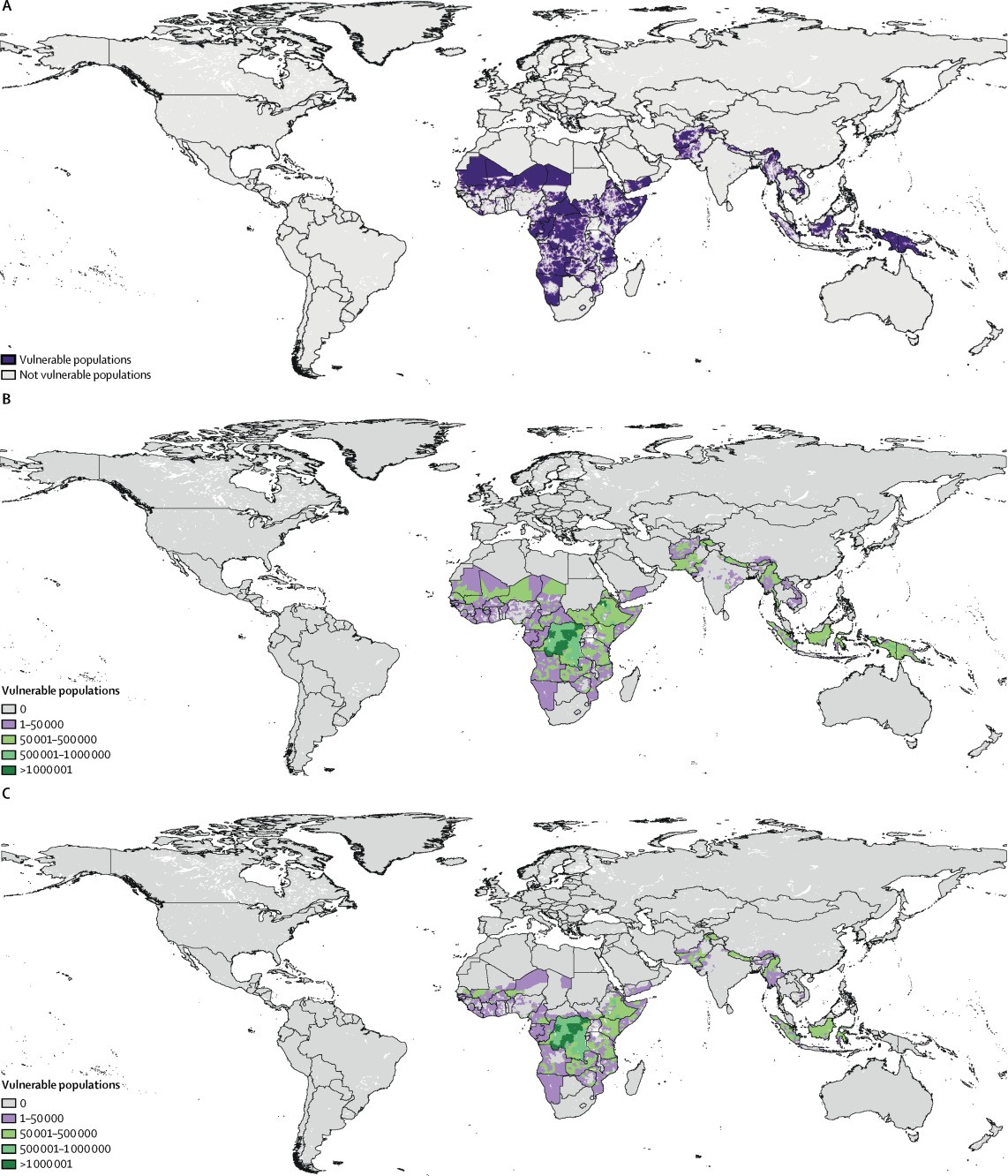 For a more detailed description of the vulnerability analysis, please see the full text version of the article.

Mr Joshua Longbottom is currently a PhD student at the Liverpool School of Tropical Medicine. Joshua’s PhD project focuses on producing high spatial resolution maps of neglected tropical diseases, with a focus on human African Trypanosomiasis (HAT) and associated vectors.” You can reach him via email at joshua.longbottom@lstmed.ac.uk.

This work was funded by the Bill and Melinda Gates Foundation.