“Live in each season as it passes - breathe the air, drink the drink, taste the fruit & resign yourself to the influence of each.”  Thoreau, in his Journal. 1835

Millions of herbarium specimens are being digitized every year and made available online. In the USA, this effort is being spear-headed by the iDigBio program, and involves hundreds of institutions around the country. Similar initiatives have also been implemented in Europe, China, Australia, and elsewhere. As a result, scientists now have instant access to datasets of plant distributions, morphology, and phenological behavior that were once unimaginable in terms of their scale. These massive digital datasets allow scientists to carry out ecological, evolutionary, and climate change research far more quickly and easily than ever before. Furthermore, the sheer scale of these data make it possible for scientists to pursue new and exciting research projects that could fundamentally reshape our understanding of the pattern—as well as the future—of plant and animal diversity on Earth.

In three recent papers, many scientists, including ourselves, have shown some of the opportunities and limitations of research using herbarium specimens. 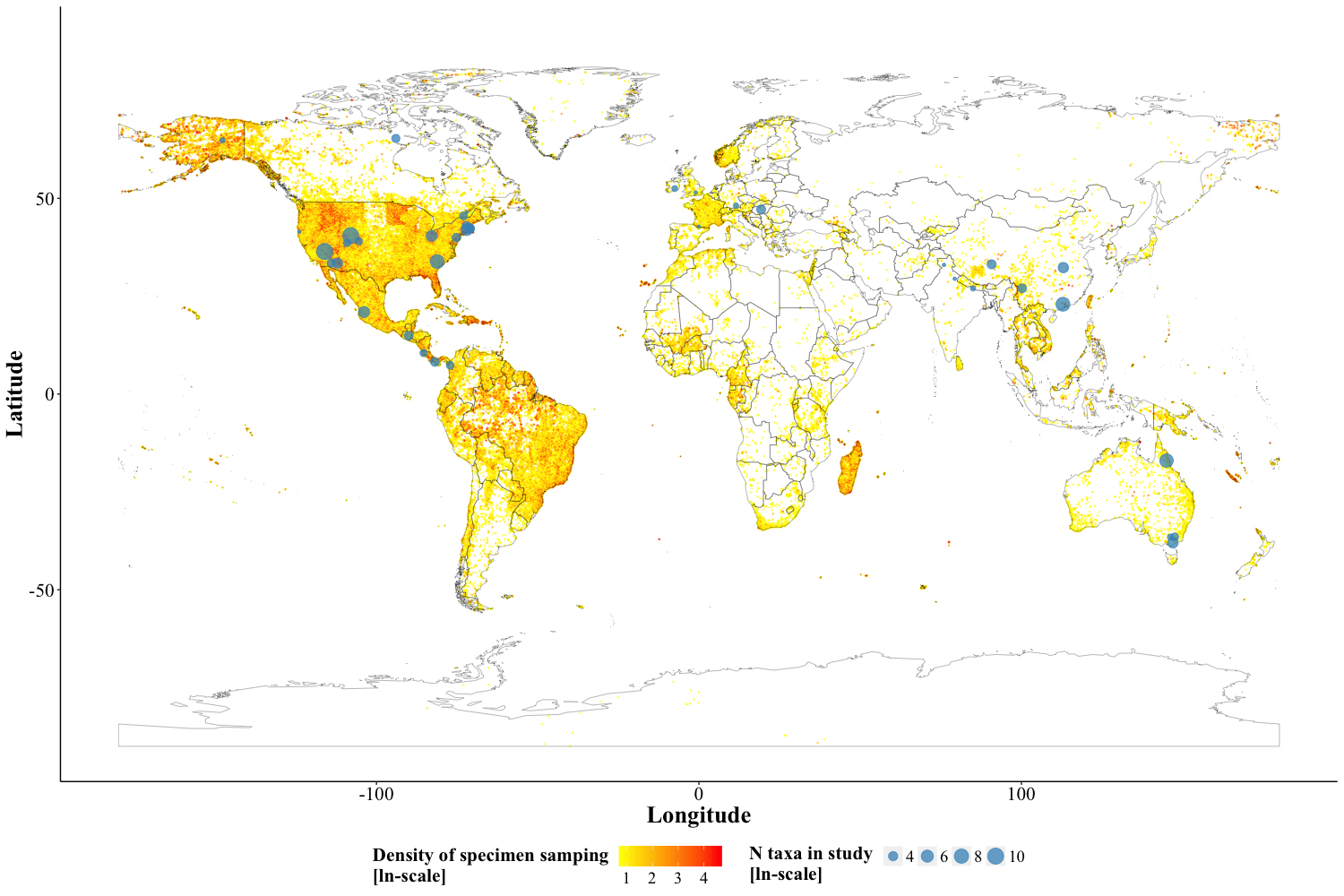 Figure 1.  Phenology studies using herbarium specimens (blue-gray dots) are increasing in number and their geographical distribution, and this process is being facilitated in regions of the world with a high density of digitized herbarium specimens (yellow-to-red dots) (From Willis et al. 2017; Figure 1). 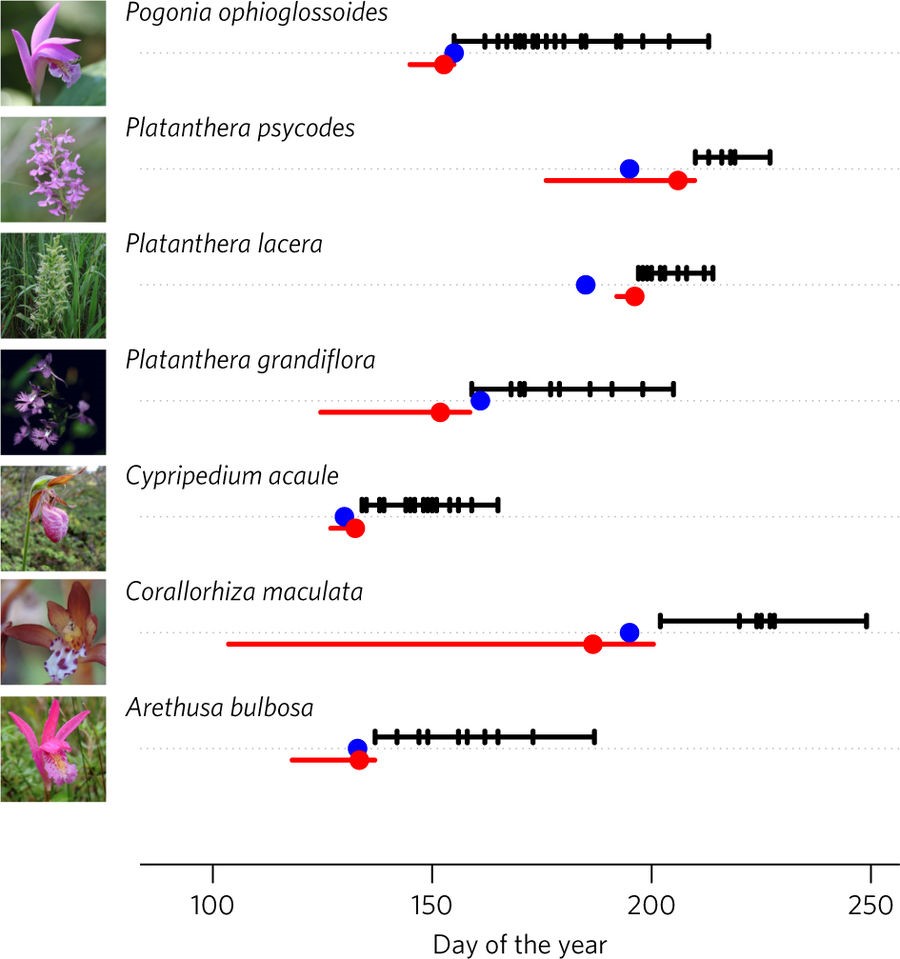 Herbarium collections often reflect the preferences and habits of their collectors. This is well known to botanists that work in museums, but is less appreciated by others. If ecologists, climate change biologists, and other researchers do not appreciate the biases of collections, this could lead to mistaken conclusions when using herbarium specimens for research. In this study, Daru and his colleagues examined over 5 million digitized herbarium specimens from South Africa, Australia, and New England and determined that there were significant and consistent geographical, seasonal, and phylogenetic biases to the collections. For example, specimens were more frequently collected closer to roads and herbaria than other places, threatened species were collected less than other species, and collection efforts were disproportionately focused in some closely related groups (i.e., clades) more than others. Also, a high percentage of specimens were collected by a small number of very active collectors, likely biasing collections toward the groups of plants these collectors preferred. Future studies using herbarium specimens for novel research projects, especially focused on diversity, distribution, and comparative evolution, will need to take these biases into account in order to avoid erroneous conclusions. 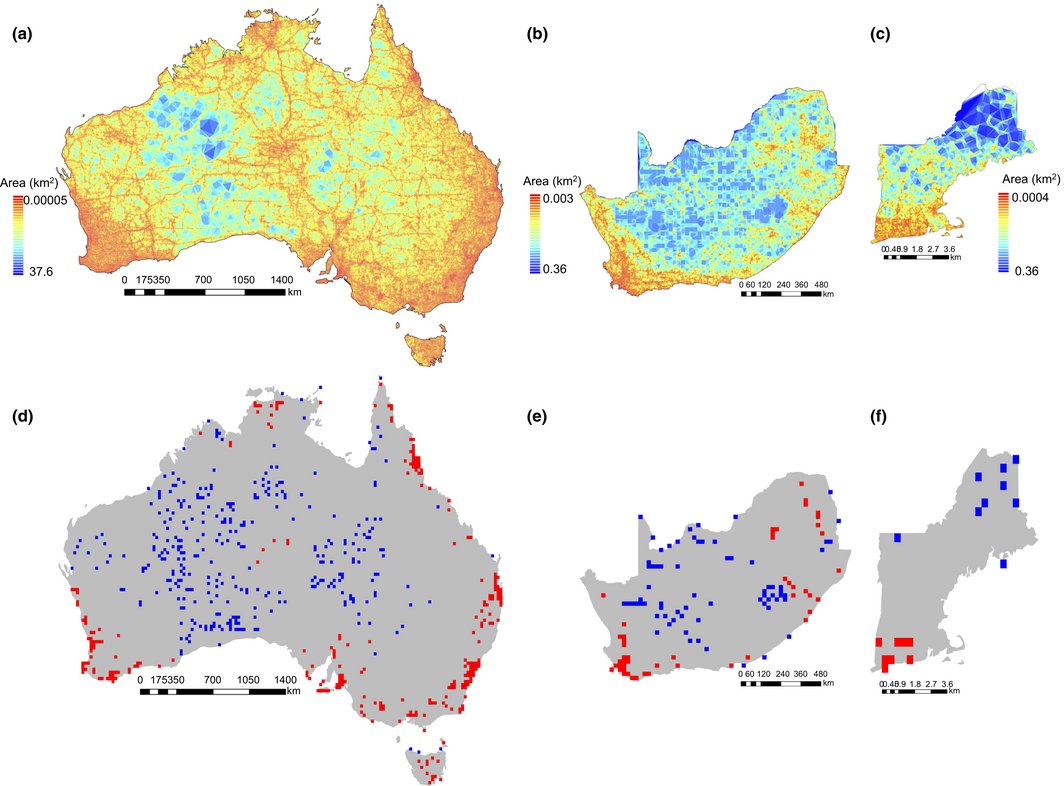 Figure 3. There is a strong geographical bias in collecting in Australia, South Africa and New England, with a greater density of collections nearer to herbaria, roads, and urban centers, and with smaller, redder triangles expressing greater sampling effort and larger, blue triangles representing less sampling effort. (From Daru et al. 2017; Figure 1a, b, c.).

As these three papers demonstrate, there are many exciting new opportunities for ecological, evolutionary, and climate change studies using herbarium specimens, and the potential of these studies will greatly expand in coming years as millions more digitized herbarium specimens become available online.