“Because of their huge collections size, particularly in regard to mollusks from communities directly subject to pollution and disturbance, mollusk collections provide a massive international resource for environmental monitoring. Without support for retrospective EDP [electronic data processing], which will have to come from outside present institutional budgets, this resource will remain virtually untapped” (Alan Solem, 1975: 232).

iDigBio’s mission, making data of millions of biological specimens available on the web, enables and fuels an enormous biodiversity research potential. Research based on collection data will have a broad global impact on understanding the environmental health of the planet. However, the enormous diversity of organisms, in body sizes, shapes and preservation types, necessitates the development of numerous digitization workflows which are tailored specifically to the various organism groups and their preservation types.

Following discussions in the context of the current InvertEBase TCN, which concentrates on select terrestrial and aquatic arthropod and molluscan groups, our focus extended to encompass all Mollusca -- the large holdings of gastropods, bivalves, cephalopods, chitons, and other groups -- that are held by North American institutions. We (Shea et al., 2018) recently published a report on the results of an iDigBio-supported workshop held at the 2017 annual meeting of the American Malacological Society (AMS) in Delaware. Thirty-eight mollusk collection professionals – curators, researchers, and collection managers – from 24 US and Canadian collection institutions reported on, analyzed and compared the status of the mollusk collections under their care. The discussions focused especially on digitization issues, database selection, imaging strategies, the need for taxonomic authority files (including synonyms), and problems associated with georeferencing. At the conclusion of the workshop, the organizers distilled the many discussion points raised during the workshop into 16 different possible action items, and participants were asked to anonymously identify high and low priority needs. The results provide a community-driven roadmap for essential work for mollusk collections around the country (Fig. 1 from Shea et al., 2018). 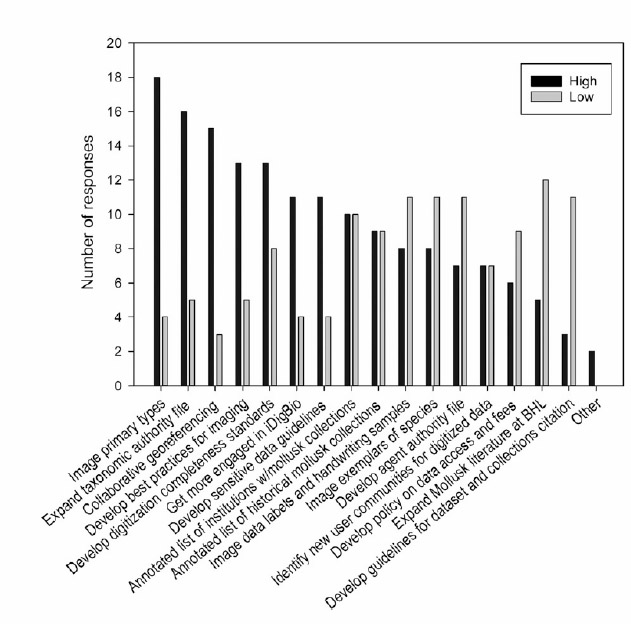 Immediately after the workshop, the AMS President’s symposium (organized by E. Shea) featured a preliminary analysis of the status of mollusk collections in the US and Canada (Bieler et al., 2017), followed by  discussion of the value of provenance and accessory data (Rosenberg & Khoo, 2018), MRI and uCT imaging techniques (Ziegler et al., 2018), invasive terrestrial molluscan species tracking (Vendetti, 2018), and telepresence-enabled marine explorations aboard the NOAA Ship Okeanos Explorer and other ships.

The preliminary mollusk collection analysis presented at the symposium was the midpoint of a much larger effort to synthesize our understanding of the breadth and depth of such collections in North America and compare today’s landscape with that encountered by Solem (1975). The resulting synoptic work (i.e., Mobilizing Mollusks, below) was the result of an exhaustive survey and analysis of every known mollusk collection in the US and Canada (Sierwald et al., 2018).

Mobilizing mollusks: Status update on mollusk collections in the U.S.A. and Canada

Mollusk collections holdings in North America are enormous and relevant material is held by many institutions, from the largest at the National Museum of Natural History to small facilities known mostly to regional specialists.  But how much material is actually out there?  How does it parse it out into land, freshwater, and marine material? What are the geographic strengths, how many of the specimens are accessible and how many are hidden in backlog? These questions are of interest to both the collections community and a wide variety of researchers who would like to access the data intrinsic to the physical specimens in our institutions. These questions are not new:  In the early 1970s, Field Museum’s invertebrate curator Alan Solem set out to address these and similar question by conducting a survey-based analyses of the mollusk collections in the U.S. and Canada that was published in 1975. Solem reported 3.74 million lots of which 775,000 (21%) were uncataloged backlog and suggested that backlog was growing at a faster rate than specimens were being cataloged.

More than four decades later, in 2017, our team repeated that survey -- now with broader coverage of institutions and, of course, with an eye on digitization and web-shared information that were still on the horizon when Solem conducted his baseline study.  Now, a minimum of 8.5 million mollusk lots representing some 100 million specimens are held by 86 natural history collections in the U.S. (81) and Canada (5). Of these, 6.2 million lots representing 70 million specimens have been cataloged (73%), another 2.3 million lots were considered quality backlog awaiting cataloguing, and 4.5 million lots (53% of the total) had undergone some form of data digitization. About 1.1 million (25%) of the digitized lots have been georeferenced, albeit with different approaches to accuracy and uncertainty. There are 35,000 primary type lots and 66,000 secondary type lots, representing 1.6% of cataloged lots. About 87% of lots are dry and 13% are ﬂuid preserved, with less than 0.3% frozen. The majority of lots are gastropods (71%) and bivalves (26%). By habitat, 54% of lots are marine, 26% terrestrial, 19% freshwater, and 1% brackish. About 43% of marine and 57% of non-marine holdings are from North America including the Caribbean. We found that the overall size of mollusk collections has grown by 227% and cataloged lots by 208%, but quality backlog has grown by 300%, conﬁrming Solem’s extrapolation. Solem noted that the eight largest collections held 78% of the lots, but in 2017 the eight largest (now with a slightly different composition) held only 63.5% of the lots, reﬂecting substantial growth of small and mid-sized collections, and the larger number of institutions that we surveyed.

Our work also supported another of Solem’s (1975) findings–that mollusk are among the best sampled metazoans in terms of number of specimens per species. Because of large sample sizes, mollusk collections can be used not only to document changes in distribution, but in abundance, morphology, genetic diversity, and phenology (Rosenberg & Khoo 2018). Identifying samples appropriate for such studies requires rapid and effective access to the information in collections and the underlying samples.

Our paper explores both the challenges of mollusk collection digitization and their potential research use.  100 million specimens strong and counting! 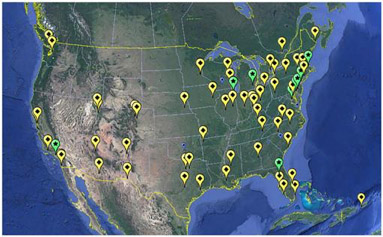 Distribution of surveyed molluscan collections in North America (note that two collections, in Alaska and Hawaii, are outside the map area), from Sierwald et al. (2018). Green/asterisk flags mark collections that rank among the 10 largest by number of cataloged lots; yellow/diamond flags mark collections with at least 1,000 verified research-quality specimen lots of extant mollusks; smaller blue flags mark collections with smaller such holdings or for which only limited data could be obtained during the survey. Map data ©2018 Google, Image Landsat/Copernicus, Data SIO, NOAA, US Navy, NGA, NSF, GEBCO, US Dept of State Geographer.