From the Tropics to the Drawer and Back: Digitized New World Swallowtail Butterfly Specimens Inform Biodiversity Patterns

Contributed by: Hannah Owens from the Florida Museum of Natural History, University of Florida

As a postdoc at the Florida Museum of Natural History, I am using data from museum specimens to understand why swallowtail butterfly diversity increases as one approaches the equator. This latitudinal gradient has been a subject of scientific curiosity for hundreds of years; commonly explored drivers stem from macroevolutionary to ecological to biogeographic hypotheses. My work seeks to generate many kinds of data derived from digitizing museum specimens to investigate multiple hypotheses in a single framework.

Lately, I have  been working to integrate morphological data derived from specimens with information on their collecting locality to understand patterns of morphological variation in the context of geography and ecology. Morphological variation within species may be shaped by co-occurrence with similar species, the size of its geographic range, the size of its ecological niche, as well as physiological constraints. While single-species studies such as these are not uncommon, by collecting a large, multispecies comparative dataset for which the phylogenetic relationships are known, we can begin to understand these patterns in the broader context of evolution.

An example of the specimen images we’ve been taking with specimen labels and color and scale bars in the same plane of focus as the specimen on a standard 50% gray background.

The first step in this project was to digitize data from specimens representing as many of the 66 species in the group as I could, with a goal of at least 20 specimens per species. To accomplish this, I enlisted the help of several volunteers to image specimens here at the FLMNH. The dorsal and ventral surfaces of each specimen, as well as their labels, were imaged with a scale bar and a color standard (for reasons I’ll get to in a bit). When all was said and done, we’d collected images of 968 specimens from across the Neotropics and Asia (it turns out calling them “New World” swallowtails is a bit of an oversimplication from a phylogenetic perspective). To fill in the gaps, I packed up a portable imaging rig constructed by fellow FLMNH postdoc Chris Hamilton, and took this show on the road, visiting the Field Museum (120 specimens imaged), the American Museum (156 specimens imaged), and the Smithsonian (367 specimens imaged). That’s 1,611 specimens from four museums in less than two years! 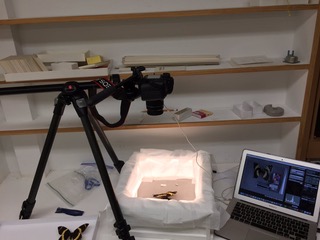 The portable imaging setup in action in the Smithsonian collections.

The next big job was to get data from these images to understand the geographic basis of morphological diversity. We posted specimen images on the Notes from Nature website LINK: https://www.notesfromnature.org/, where volunteer citizen scientists transcribed data from specimen labels in each image. These data were then passed on to undergraduate research assistants, who translated plain-text collecting locality descriptions into latitude and longitude information. Meanwhile, a few more research assistants and I collected geometric morphometric measurements from the images (using the scale bar to standardize image sizes). 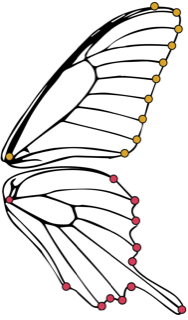 The forewing and hindwing landmarks we are using for our morphological analysis.

Interestingly, when I analyzed all these data, not only did I find contrasting patterns of evolution between tropical and temperate species, but also between forewing and hindwing measurements! Generally, I saw less variation in hindwing shape within species. One possible reason for this may be that hindwing shape is constrained by predation (check out some of the recent work coming out of my postdoc co-advisor, Akito Kawahara’s, lab). There was also less variation in temperate versus tropical species, which may be due to constraints imposed by an increased diversity of closely related species co-occurring in the tropics.

The next step for this work is a collaboration with the Ries lab LINK: http://www.butterflyinformatics.org/people at Georgetown to quantify color variation among species (standardized with the color bars present in each image). These data will be used to test the idea that climatic conditions can greatly influence intraspecific color variation across landscapes. Stay tuned!