Managing invasive species is a central challenge in conservation biology. Quaternary fossil records and zooarchaeological assemblages are revealing that many of today’s introduced species may have more complicated histories than previously expected, changing how we may choose to view or manage these species. In California, wild turkeys (Meleagris gallopavo) are a non-native, potentially invasive species that were introduced in the mid-20th century as a game animal. Management of wild turkey populations in California is a controversial topic; stakeholders including hunters, farmers, habitat and landscape managers, and conservation advocates express a variety of views on the issue, ranging from some supporting the protection and further propagation of introduced turkey populations to others viewing the species as an invasive in need of partial or complete eradication. Meanwhile, the true role of the species in California ecosystems, as an invasive or otherwise, remains nebulous and poorly studied.

This situation is further complicated by the fact that Late Pleistocene fossil records contain California Turkey (Meleagris californica), a congener of the Wild Turkey abundant in Late Pleistocene fossil deposits in Southern California but disappearing entirely at the end of the Pleistocene.  The circumstances of the species’ extinction remain poorly understood, and the recent presence of a native turkey species in California draws into question the possibility of niche overlap between this extinct species and extant introduced M. gallopavo, which, if confirmed, would recontextualize discussions around the management of turkeys in California today.

Digitized paleontological collections data offers a unique opportunity to reconstruct the ecological niches of extinct taxa. In our study, we compiled a comprehensive list of known Last Glacial Maximum M. californica fossil localities using digitized records from the UCMP vertebrate paleontology collections database, the Paleobiology Database (PBDB), and the La Brea Tar Pits & Museum. Utilizing these fossil localities as well as reconstructed paleoclimatic data for the Last Glacial Maximum from the WorldClim database, we constructed a species distribution model for M. californica, reconstructing the Pleistocene distribution. We then projected the model forward into present-day climatic conditions, generating a prediction of the niche of M. californica in modern California. Large areas of high suitability across both coastal and inland regions of modern California were predicted by the model for this extinct species. 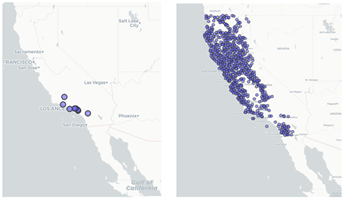 The results suggest that the geographical and environmental spaces occupied by introduced M. gallopavo and extinct M. californica may be analogous in many parts of California, with at least partial or regional niche overlap being likely. Potential interaction between introduced turkeys and a pre-existing ecological niche vacated by M. californica reframes dialogue around the management of turkeys in California away from a simple tradeoff between invasiveness and harvest value. Most importantly, this study highlights the important and powerful role that digitized paleontological collections data can play in working towards the resolution of difficult and complex conservation and management issues in modern ecosystems.