In the summer of 2017, I participated in the iDigBio mini-REU under Drs. Pamela Soltis and Douglas Soltis at the University of Florida, where I was mentored by graduate student Blaine Marchant. We investigated niche differentiation of polyploid populations from their diploid progenitors using digitized museum specimen records and climatic niche modeling.  Polyploidy, or whole-genome duplication, is an important mechanism for diversification in flowering plants in both recent and ancient evolutionary contexts. There are two types of polyploidy: 1) autopolyploidy, in genome duplication occurs within a species; and 2) allopolyploidy, in which the duplication is associated with hybridization between species. In both cases, the newly formed polyploid is more or less reproductively isolated from its diploid parent(s) and must become established among its highly similar progenitor(s). Several hypotheses have been proposed to explain how polyploids can become established following formation, but evidence for any of these hypotheses is limited. One commonly cited hypothesis is that the polyploid population occupies an ecological niche, or the environmental conditions, different from that of its diploid progenitor(s). 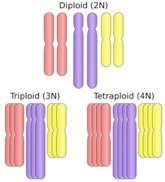 Fig. 1: Whole-genome duplication within a species (autopolyploidy) can give rise to many different ploidal levels. For example, a polyploid can have three copies (triploid) or four copies (tetraploid) of each chromosome.

Our project investigated the ecological niches of polyploid populations relative to their diploid parents for a species that has long been known to have both diploid and polyploid populations, Galax urceolata (common names: beetleweed, wandflower, wandplant). Galax urceolata is found only in the Appalachian Mountain range and has relatively intermingled diploid (2x), triploid (3x), and tetraploid (4x) populations. These three ploidal levels are referred to as different cytotypes. 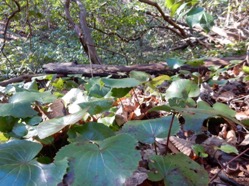 We found that diploids and tetraploids of G. urceolata have slight climatic niche differentiation. In regard to climate change, we predict all cytotypes will face extensive range loss as the Appalachian Mountains become warmer during the next 50 years. Galax urceolata may therefore be under threat due to loss of suitable habitat, and conservation efforts will be needed. Overall, this investigation of G. urceolata provides more insight into polyploid ecology and evolution, as well as having important conservation implications, all using digitized specimen records and publicly available resources.