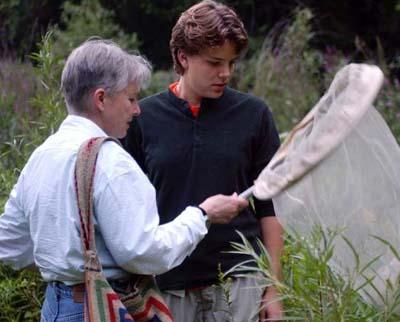 iDigBio is very pleased to welcome Joanna McCaffrey, our new Biodiversity Informatics Manager! Joanna comes to the iDigBio team from the Field Museum of Natural History, where she has spent the past ten years working in a variety of databasing, imaging, and collections positions.

Joanna’s initial forays into the world of computers took place in the late 1970’s, when she was working as a computer operator at a solar observatory in Sunspot, New Mexico. From this experience, Joanna identified a strong talent and interest in computers, and enrolled in a graduate computer science program in Las Cruces. It was in the remote mountains near Sunspot that she also became interested in Lepidoptera; in retrospect, the two loves born in Sunspot are what ultimately brought her to Gainesville.

Joanna’s training in computer science took her first to IBM in Austin for a graduate co-op and then to AT&T Bells in New Jersey and Illinois. While at the Labs, she worked on projects ranging from developing tools for software developers, writing language standards, producing web sites, providing human factors data for customer-facing tools, and, finally, running the technology side of a knowledge management deployment which provided troubleshooting information to Tier 3 telephone equipment engineers. One of her tools won a prize from Arno Penzias for “Best Technology Transfer Effort of the Year”.

Joanna’s career with the Field Museum in Chicago began with a volunteer position in the Insects department, where she worked on organizing the Lepidoptera collection for Paul Goldstein. When a formal position opened up that required knowledge about the collections as well as a degree in computer science, it was a perfect fit. The challenge for the new Collections Database Architect was a big one, however: unify the disparate specimen collections into one state-of-the-art repository under the project name "Common Ground." It was a comprehensive challenge, and Joanna had to raise money to fund herself and the technology that was to come, prepare the staff for the new software management system, make herself familiar with all of the collection inventories of databases, and then prepare and cleanse the data that would be part of the collections supported by grants from NSF, IMLS, and a federal earmark. The first collections from which data were migrated included Botany, Fishes, Invertebrates, Anthropology, Insects and Mammals. Only Birds, Herps and Geology remained before the position was moved to full maintenance in the IT department. In the intervening years they were migrated as well.

Joanna’s duties at the Field Museum also included project management, vendor management, grants management, and creating products to support users and the public, including reports and labels, web pages, and training. When Common Ground was moved to IT, Joanna continued to carry out bioinformatics development in the Botany Department.  Using her photography training, she also managed various imaging projects and operated the camera for Mellon’s Global Plants Initiative project.

When the iDigBio job opening appeared in the summer of 2012, Joanna thought it would be a excellent opportunity to put her experiences together again in a great new endeavor. She sees it as a chance to further her passion for data in a broader domain with an impactful mission.

When she is not working, Joanna loves to listen to classical and world music and to travel with her favorite camera - either her ocular one or her Nikon.  Her personal images can be viewed at www.joannamccaffrey.com.