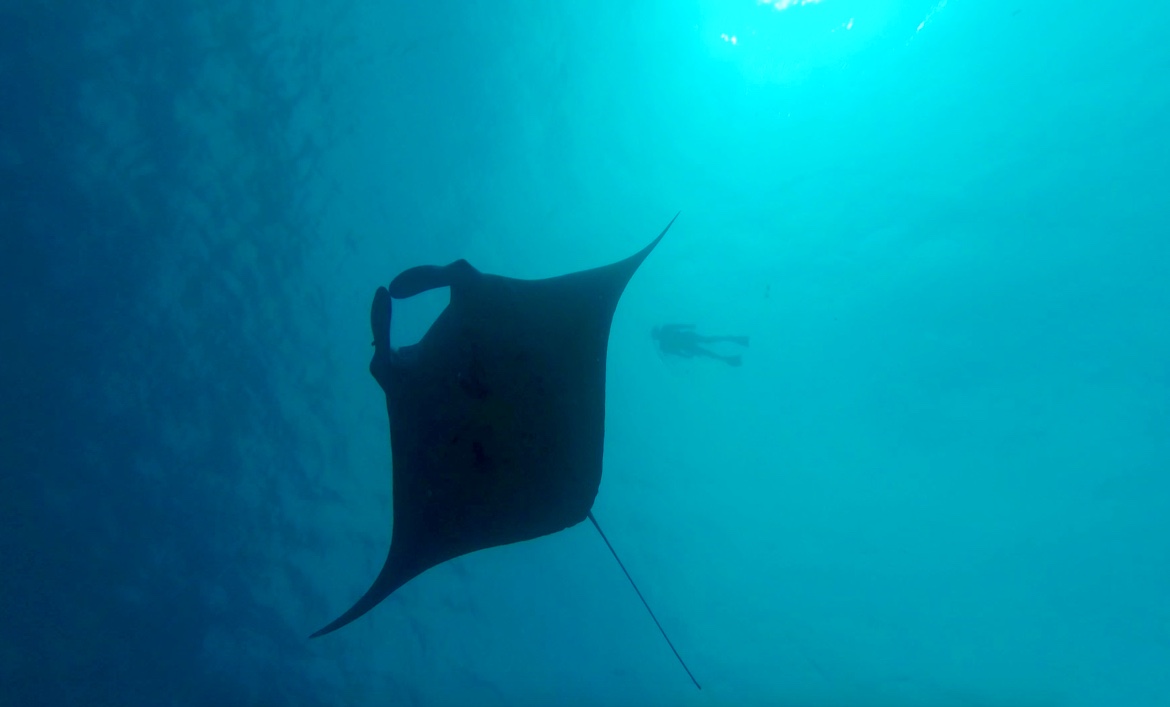 Manta rays are some of the ocean’s gentle giants. These amazing animals are related to sharks and other rays and have a skeleton made of cartilage, instead of bone. The genus Manta, consists of two species: Manta birostris and Manta alfredi, referred to commonly as the Giant Manta and the Reef Manta Ray, respectively. They are in the family Mobulidae, along with several species of Mobula. Recently, a new study focusing on the phylogeny of the family Mobulidae determined that members of Manta should be placed within the genus Mobula (White et al, 2017), reclassifying them as Mobula alfredi and Mobula birostris, and eliminating the genus Manta.

Species of Mobula recently joined manta rays as species protected under Appendix II of the Convention on International Trade in Endangered Species of Wild Fauna and Flora (CITES), which prevents any trade or harvest of the species that may be detrimental to the survival of the species in the wild. The taxonomic rearrangement that places the species of Manta in Mobula is unlikely to negatively impact their protections under this convention.

Manta rays have the largest brain-to-body ratio of all extant fishes, and are known for their curiosity. They are classified as planktivores, feeding on the microscopic plants and animals that float in the ocean. They swim in the water with their mouths open and filter the water for the plankton. Research has shown they also consume small fishes, but fishes are not a staple in their diet. Manta rays migrate throughout their lives to move to waters where plankton is more abundant. They are found in tropical and temperate waters in the Atlantic, Indian and Pacific Oceans. 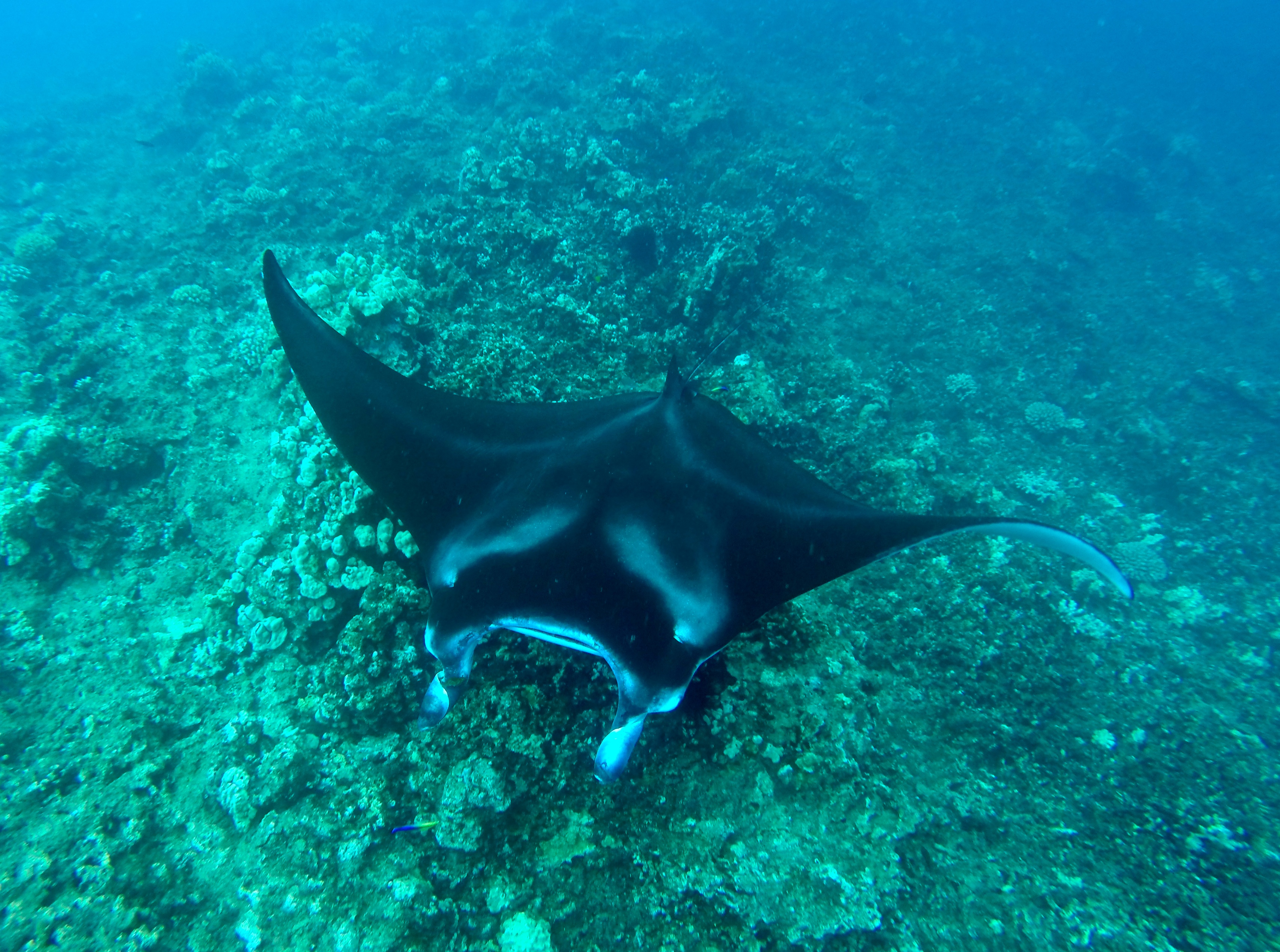 Manta rays can live to between 50 and 100 years of age. It is thought that they mature around 10-15 years of age. Males court females by following them around reefs, and scientists have observed manta ray trains, where one female is followed by several males. The female chooses a male and mates with him and the fertilized eggs develop inside her body. Newborn pups have a wingspan of about 5 feet. It is unknown to scientists how frequently females give birth, but recent research suggests birth rates of 1-2 pups every 2-5 years. This slow rate of reproduction leaves manta rays vulnerable to exploitation and endangerment,

The Giant Manta can have a wingspan of up to 23 feet and weigh over 4,000 pounds. This species can be found migrating along the eastern coast of Florida during summer months. The Reef Manta Ray’s wingspan can reach 15 feet, and the species can reach  3,000 pounds.

Manta rays have few natural predators, primarily sharks and orcas. Unfortunately, the biggest threats to manta rays come from humans. They are often found entangled in fishing line, gill nets and trawl nets. Manta rays are unable to swim backwards and need to continuously swim to ensure water and oxygen are flowing over their gills. If they become entangled, they rarely survive. Another threat manta rays face is being  killed for their gills, which are highly desirable for Chinese medicine, even though there is no scientific evidence that the gills provide any medical benefit, You can help protect manta rays by not purchasing from companies that sell manta ray products, supporting ecotourism operators that follow good codes of practice when interacting with manta rays, and by speaking out against the trade of manta ray products.

Yasmin is a wildlife biologist and artist. She obtained her MS in Environmental Science from Drexel University and has spent the past couple of years working as a wildlife biologist for the state of Florida. Her goal in life is to make a positive difference in the world, for all wildlife, and inspire others to do the same. This goal and her love for manta rays inspired her to start the organization Conversation Ocean with co-founder Ariel Nicole, a passionate shark and ocean advocate. Yasmin believes art plays a powerful role in fostering environmental awareness and creates the designs for Conversation Ocean with that goal in mind.

Jaclyn is an avid ocean advocate and ocean lover. She has a B.S. from Ohio University in Marine Biology and an M.S. from Nova Southeastern University in Environmental Education. She currently works in Florida as a science teacher at Saint Paul's School in Clearwater. Jaclyn is a certified scuba instructor and teaches scuba to middle school students. She is the Outreach & Education Coordinator of Conversation Ocean, and devotes her profound understanding of marine biology and ecology to saving our oceans by educating others.