iDigBio hosted a three-day hackathon on June 3-5, 2015, in Gainesville, Florida, focused on the development and integration of applications that use iDigBio APIs to ingest, access, visualize and search biocollections data. The Hackathon was a great success based on a survey of the participants, and outcomes include 16 code repositories, with code developed in R, Python, Javascript, Ruby, HTML, Scala, and Java. Thirty participants from twenty institutions with diverse backgrounds developed software to: integrate collection management applications with direct access to iDigBio data, facilitate media ingestion and georeferencing, link iDigBio data with taxonomic, genetic and climatic data to facilitate research and data discovery, and visualize change in species distributions over time. A majority of the participants plan to continue development of what was started during the hackathon with the goal of creating production-quality products.

Given the large amount of new ideas and prototypes to report, a series of hackathon reports were produced. We will share one report each week that discusses the outcomes from the four teams formed during the hackathon: Team Visualization, Team Integration, Team Media Ingestion, and Team Research.

We will start with the report from Team Visualization, who generated three code repositories to deal with species distribution visualization on a map over time using different technologies. This report will be followed by Team Integration's work with Global Names Architecture, GenBank, and other external sources to enrich the data in iDigBio using JSON-LD, GEOLocate, and Twitter. In the third report, Team Media Ingestion will show a method to share 3D images with good usability and direct integration of two widely-used collection management systems (Symbiota and Specify) with the iDigBio media ingestion appliance and/or API. The final report by Team Research is on creating client libraries to facilitate access to the data in certain programming languages, creating linkages to other resources (e.g., taxonomies, phenology, climate, and genetics), as well as analyzing and curating the data in iDigBio. 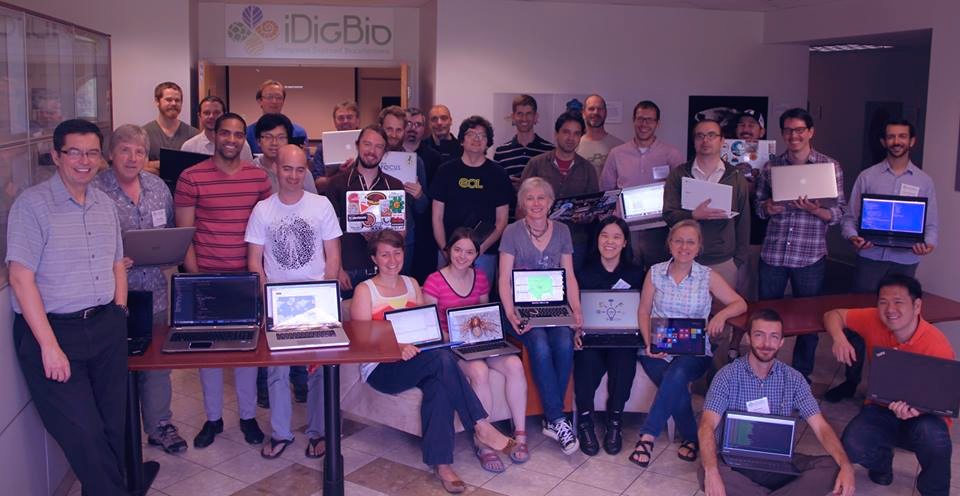