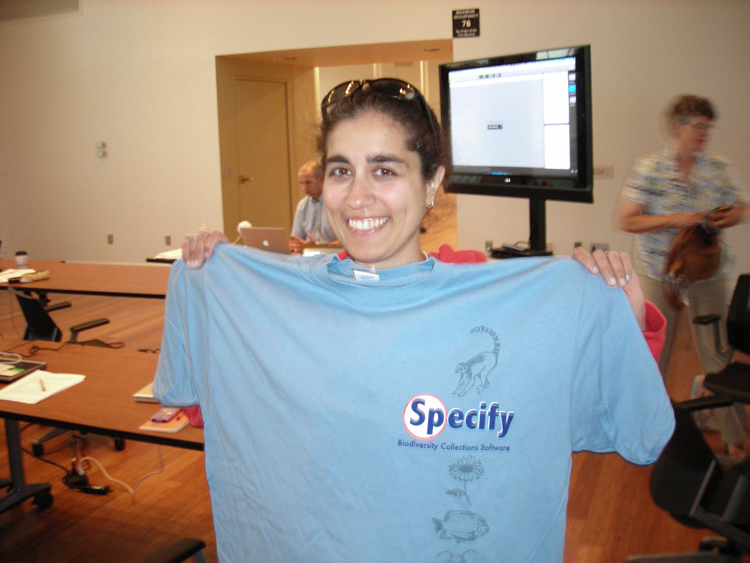 iDigBio, Specify Software Project, and the Biodivesity Institute at University of Kansas joined forces the week of August 12–16, 2013 to offer its first “progressive” Specify workshop. The recent release of Specify 6.5 made the event a timely adventure. Twenty on-site participants representing 16 institutions were joined by up to 20 remote attendees for the occasion. The week began with the basics, including the installation of Specify and its related software before progressing through four days of increasingly advanced topics. Attendees selected three consecutive days that best fit their needs, which ensured a rich mix of participants and discussion throughout the week as well as the ability for attendees to match their needs to the workshop’s agenda. The active cadre of remote participants injected numerous excellent questions, comments, and observations that added immeasurably to the content.

The workshop was supported by a persistent wiki, available without restriction through the Digitization Resources link on the main page at https://www.idigbio.org/, or directly at https://www.idigbio.org/wiki/index.php/Specify_Workshop. Workshop proceedings were recorded using Adobe Connect and will be available as a set of videos at http://www.specifysoftware.org/ and on links from the wiki. Keep an eye out for these links to appear shortly.

Installation day turned out to be an excellent opportunity for new Specify users to get personal, hands-on assistance from Andy Bentley and Theresa Miller with configuring their equipment and making it ready for the installation of MySQL, MySQL Workbench, and Java 7, three important software components that underpin Specify. Participants learned much about the features and requirements of their hardware from this exercise as well as developed a much clearer understanding of how Specify interacts with these software tools. Once everyone's machine was properly configured, Andy led a step-by-step walk-through of the Specify Installation Wizard, clearly explaining the differences between IT, Master, and Specify users, and what each step in the installation process accomplished. By the close of the first day, all participants had a working copy of Specify on their laptops, and the Specify team had learned some important lessons for enhancing the installation process as well as its supporting documentation. 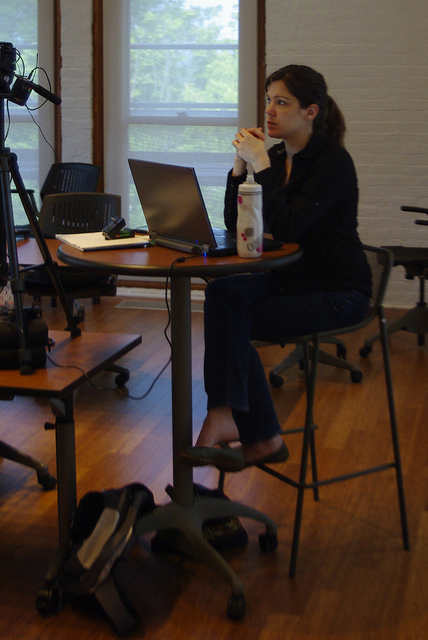 On day two we turned our attention to the essential components for day-to-day usage of the Specify software, including how to manage taxonomic and other trees; data entry through forms and subforms; designing, executing, and saving queries; and managing interactions such as loans, gifts, and accessions. Participants learned how to customize system preferences and security settings, including how to manage the several categories of users and create new users and other agents. Andy also demonstrated the integrated Geolocate georeferencing engine, which generated excellent discussion about varying georeferencing strategies and techniques. Simple forms and schema customization was introduced that taught participants how to change form captions and customize user help notes to match a local institution’s parameters and requirements. 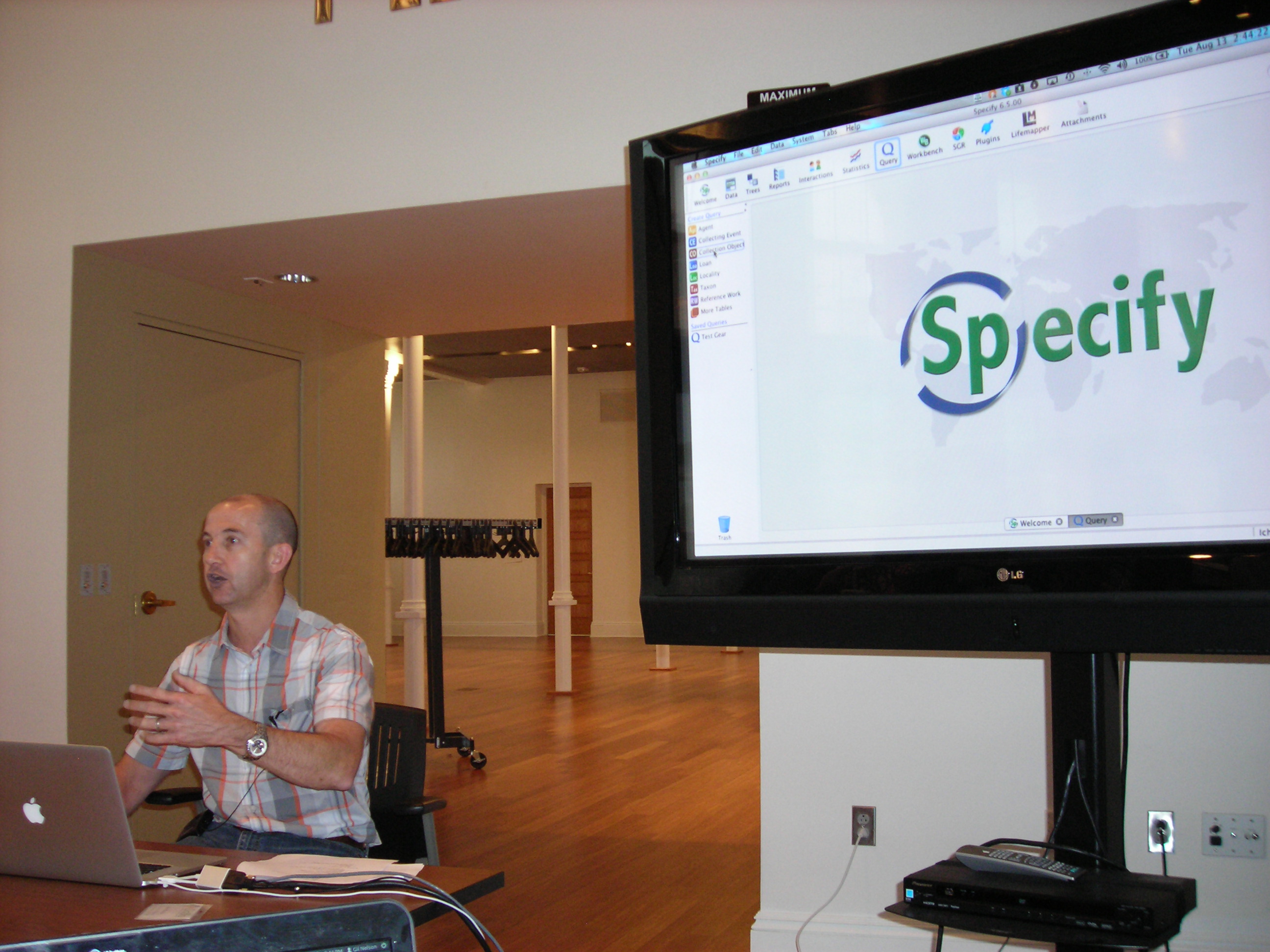 The Workbench is arguably one of Specify's more important and often-used features, which resulted in Wednesday having the highest attendance of any day of the workshop. The ability to import, clean, and upload spreadsheet data to a Specify database is critical. Andy first provided an overview of OpenRefine, an open source data cleaning utility that can be used to cluster, edit, standardize, and normalize raw spreadsheet data before importing these data into Specify. Andy noted that the Specify team plans to incorporate similar features into Workbench. He then demonstrated how to import data into Workbench and map the data for upload to the database. Participants had been instructed to bring data spreadsheets to the workshop and were given plenty of time and hands on assistance with uploading live data into their newly created or pre-existing Specify databases. 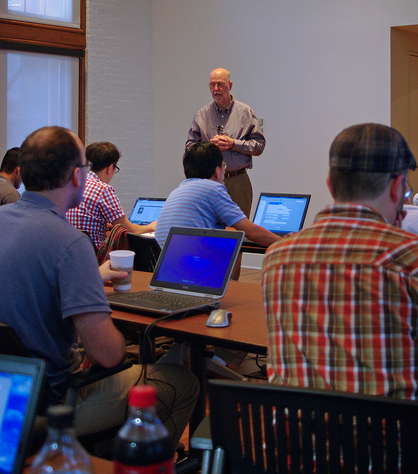 The latter part of Wednesday afternoon was devoted to LifeMapper, a new product developed by Specify developers that provides tools for niche modeling, including distributional and ecological analyses. The product interacts as a plug in with Quantum GIS, an open source geographic information system, to facilitate seamless integrated mapping. The software is operational in beta version, but is scheduled for release soon. Lifemapper can be tested at http://www.lifemapper.org.

Days four and five were devoted to a suite of advanced topics for the more experienced Specify user. Meredith Burke, the Specify team’s report design expert, led participants through the steps for using iReport to generate and print reports and labels directly from Specify. Theresa and Andy focused on schema configuration, including formatting table output and creating customized fields, including pick lists, formatted text boxes, and web buttons. Theresa also taught advanced methods for customizing forms, including adding, positioning, and removing fields, using containers to segregate or aggregate form content, and manipulating the underlying XML files from which forms are generated. Participants also learned how disparate records can be linked through relationships. 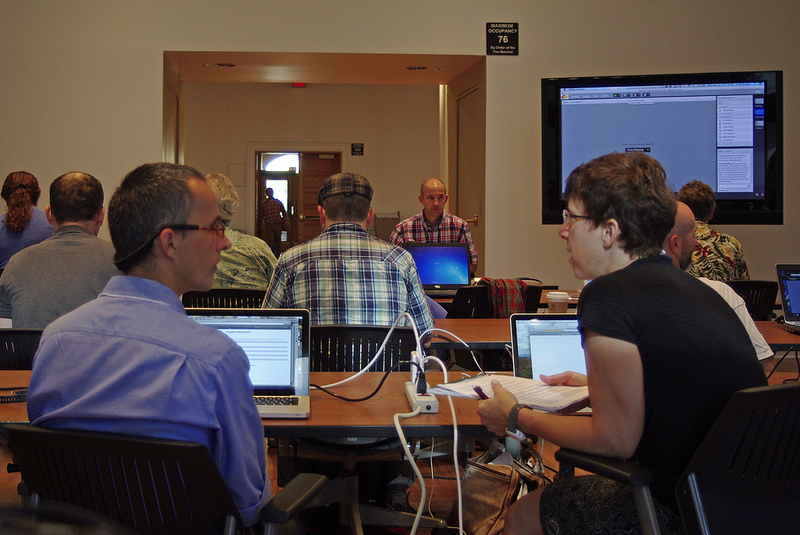 On the final day, Laura Russell, the lead programmer for VertNet, demonstrated the use of the GBIF Integrated Publishing Toolkit (IPT) for publishing Specify data to the Web. Andy introduced Scatter, Gather, Reconcile (SGR), a Specify tool for finding herbarium specimen duplicates across the internet, and provided an instructive overview of the new and soon-to-be-released browser-based Specify 7 thin client, which allows manipulation of a Specify database via the web.

iDigBio appreciates the opportunity to partner with Specify and the Biodiversity Institute at the University of Kansas. We offer a special thanks to Jim Beach, the director of the Specify Software Project for helping make the workshop happen. We also thank Dr. Leonard Krishtalka, director of the Biodivesity Institute for financial support and for his remarks to participants affirming the importance of their work and the digitization initiative. Many thanks, also, to Robert Neidlinger for contributing some of the images used in this report.