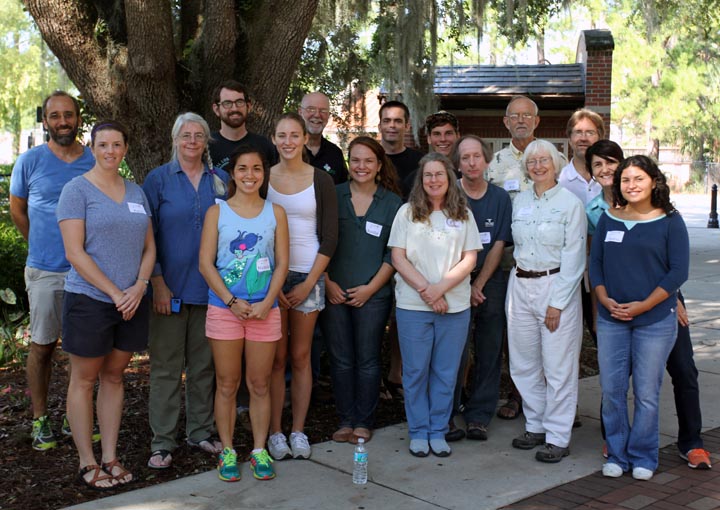 On September 13, 2014, iDigBio and the Southeastern Regional Network of Expertise and Collections (SERNEC) TCN hosted an imaging blitz at Florida State University’s Robert K. Godfrey Herbarium.  In all, 22 volunteers from the FSU community, the Florida Native Plant Society, and other organizations imaged 3,000 specimens.  This is the first in a series of digitization blitzes planned by members of iDigBio’s User Engagement for Public Participation in Digitization Working Group.  The group is pioneering new models for sustainability in digitization by developing “blitz kits” for public engagement in digital imaging, transcription, and georeferencing.

Preparation of the specimens for the blitz started three months prior with herbarium staff barcoding the targeted specimens, writing the family name on each folder, and checking that the latest name on each specimen was consistent with the name on the folder in which it was found.  Double-checking the name will become important downstream since a later step involves transcription of the specimen labels from the digital images on Notes from Nature.  The beginning and ending of a stretch of targeted folders in the collection were also marked with green (start of stretch) and red (end of stretch) tabs so that they could be easily found in the cabinets on blitz day.  The preparation of the specimens for the blitz took about 60 hours of staff time. 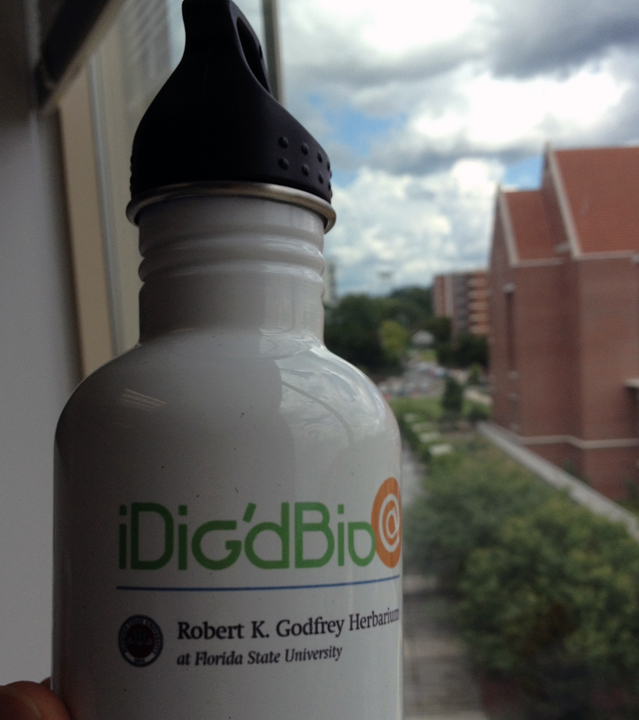 The blitz was advertised on organizational Facebook pages and listservs maintained by FSU and the Florida Native Plant Society starting about two months prior to the event, and sign-up was managed with a paid Doodle Poll account so that the poll could collect email addresses.  About 80% of participants who signed up participated in the blitz, with some needing to cancel in the week prior to the event and a few no-shows.  Two weeks prior to the event, the organizers ordered thank-you gifts for the participants from CafePress.  These were water bottles that bore the event logo.  One week prior to the event, organizers sent an email that included a map with the blitz location, parking, and lunch options, a FSU form for registration as a volunteer, a short introduction to biodiversity research specimens and their digitization, and a 1-page schematic of the roles on each imaging team and the layout of an imaging station.  Two weeks prior to the event, then again the day before the event, staff assembled the equipment for each imaging station and determined that it worked.  The earlier of these two assemblies enabled the organizers to determine if anything needed to be ordered to complete an imaging station (e.g., a new color standard).  The day prior to the event, nametags were also printed up and photo waivers and additional information on iDigBio and SERNEC were assembled for distribution. On the day of the event, organizers arrived an hour-and-a-half early for final set-up.

The Director of the FSU herbarium, Austin Mast, rallied the volunteers at the start of the morning and afternoon sessions, briefly introducing the schedule and proper ways to handle specimens as well as revisiting some of the points made in the introductory content sent out the week prior regarding the value of biodiversity research collections.  The volunteers were then divided among three imaging teams, and each team was assigned a coach—a staff member who could get them started at an imaging station and help them divide labor in an efficient way.  Prior to the event, division of labor was envisioned to involve a Photographer, Scanner, Compiler, and two Couriers. Each station quickly got into a rhythm, exceeding our expectations for the rate at which specimens could be imaged. Volunteers worked for two hours, took a 10-minute break at which organizers provided bottled water and granola bars, then worked the remainder of the four-hour shift.  The blitz completed all 3000 specimen images with about 15 minutes left to go in the afternoon shift. 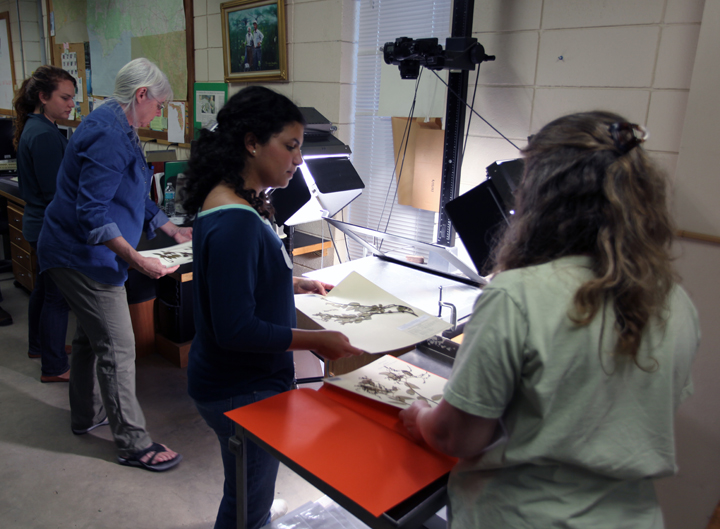 Over the course of the day, many great connections were made among volunteers and staff, lots of fun was had, interesting and unexpected specimens were seen (e.g., volunteers found numerous specimens from the 1800s, the herbarium’s specimen #1, and specimens of Canabis sativa), and an impressive amount of work was done!

After the blitz, staff checked every tenth specimen image from each station to determine that each was correctly named with the barcode number from the specimen and that the images were in focus.  This revealed one 9-specimen series of images from one station that were misnamed.  The specimens were otherwise correct!

A few of the lessons that the team learned during the imaging blitz: (1) don’t assume that because a piece of equipment is present that it works—we had to use an iPhone app to scan barcodes at the last minute because the barcode scanner we’d intended to use had the wrong connection for a newly purchased computer; (2) doing is better training than reading, (3) while the final protocol for each imaging team looked similar to the protocol envisioned by the organizers, each team found their own ways to be efficient, (4) put a staff member familiar with the organization of the collection in charge of handing folders from the cabinets to the Couriers and refiling the folders, (5) the teams could be as small as three people if a shared Courier floated among imaging stations, and (6) good chemistry on an imaging team leads to interesting conversations that make the time go quickly, but what leads to good chemistry is hard to predict.

If you are interested in participating in a blitz, stay tuned to the iDigBio calendar for more information as it is released or contact Austin Mast (amast@bio.fsu.edu) or Libby Ellwood (eellwood@bio.fsu.edu).

A huge thank you to everyone that participated! We look forward to seeing you at our next blitz! 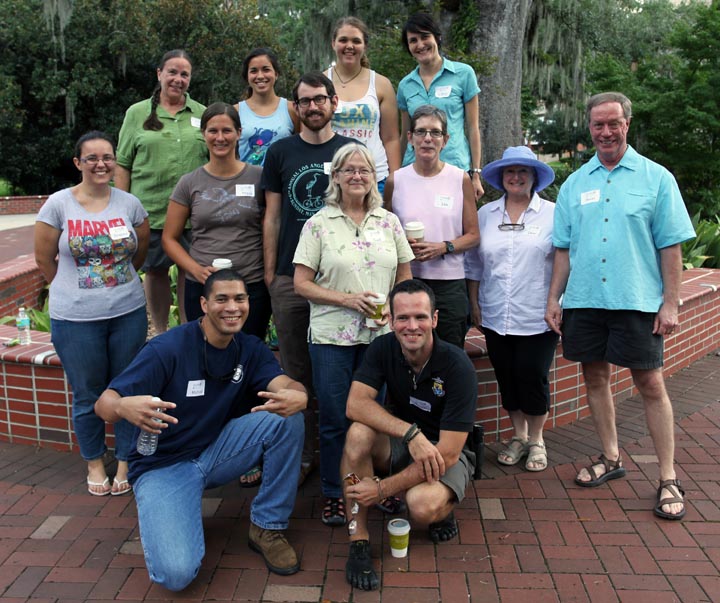