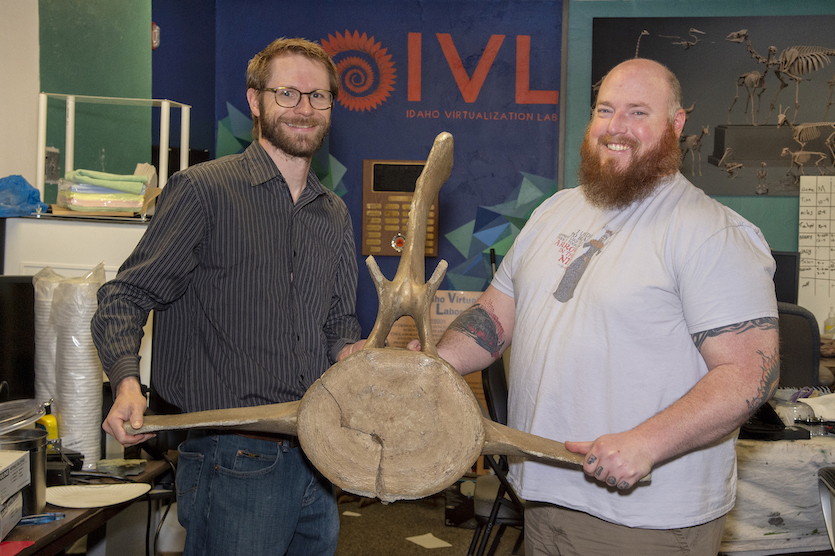 Leif Tapanila, left, and Jesse Pruitt hold up a vertebrae of a whale from the Idaho Museum of Natural History's collections that is about half the size of the ones the Idaho Virtualization Laboratory will be scanning of the blue whale in California.

POCATELLO – The Idaho Museum of Natural History and Idaho State University received a $20,000 award from the National Science Foundation in January to scan the entire skeleton of a blue whale that washed ashore in California. The skeleton is at the Noyo Center for Marine Science in Fort Bragg, California.

“This new grant was a specific one for a very specific animal,” said Leif Tapanila, director of the Idaho Museum of Natural History and professor of geosciences.  “This whale was beached on the California coast after it was struck by a vessel. It broke its back and floated to shore. That happened a while ago.”

The whale was processed and the bones were cleaned. The museum is ready to mount the skeleton in a display, but is allowing it to be digitally scanned first.

“The ideal time to scan an animal like that is right now because it is all cleaned, every element is there  – all the bones from the flippers  to the tail. It’s all there,” Tapanila said. “So, we have this opportunity to go scan every bone of this animal before they hang it up. Our results are best if we can hold each individual bone and scan their entire surface.”

The Idaho Virtualization Laboratory has portable, laser scanners that are the standard for making really high-resolution 3D images that can be digitized and put online.

“We are part of a nationwide effort by the National Science Foundation to scan all vertebrate animals,” said Leif Tapanila. “This is a monstrous task. Ultimately, they want to have a digital version of every animal on the planet. If you just consider the vertebrate animals, such as mammals, reptiles and fish ­­– there are many thousands of species right there.”

In August, the Idaho Virtualization Laboratory received a $175,000 grant from the National Science Foundation to travel to the University of California, Berkeley, California Academy of Sciences in San Francisco and the Harvard Museum of Comparative Zoology in Boston over two years to make 3D scans of large marine mammals, hippos, elephants, rhinos and other large animals.

This summer a team led by Jesse Pruitt, Idaho Virtualization Laboratory manager and technical specialist, will head to California to scan this blue whale and to scan specimens at the University of California, Berkeley and the California Academy of Sciences for the other project.

“We are looking forward to getting out there and scanning these amazing animals,” Tapanila said. “Once they are scanned they’ll be uploaded to a public website where people can view them.  The major reason the NSF feels it is important to create this database of life is to create a resource for research,” Tapanila said, “and I am especially excited about what we’ll be able to do with all these digital products on the educational side and with exhibits. I can imagine a future where we are making whole new exhibits off this fundamental data.”

Tapanila described ISU’s big-animal scanning project as a module in the National Science Foundation’s umbrella program, Open Vertebrate (oVert) Thematic Collections Network (TCN) that has a goal of scanning more than 20,000 smaller vertebrate specimens. ISU received the grant from the NSF Partner to Existing Networks program.

The co-principal investigator in this project is David Blackburn, of the University of Florida and Florida Museum of Natural History, who is leading the NSF’s oVert efforts.