On Friday, May 29, Florida State University held a transcription blitz for attendees of the Florida Native Plant Society Annual Conference. This was the third digitization blitz hosted by iDigBio, the Southeastern Regional Network of Expertise and Collections Thematic Collections Network, and FSU's Robert K. Godfrey Herbarium. Each of our previous blitzes—an imaging blitz and a transcription blitz—have been successful and this one was no different! 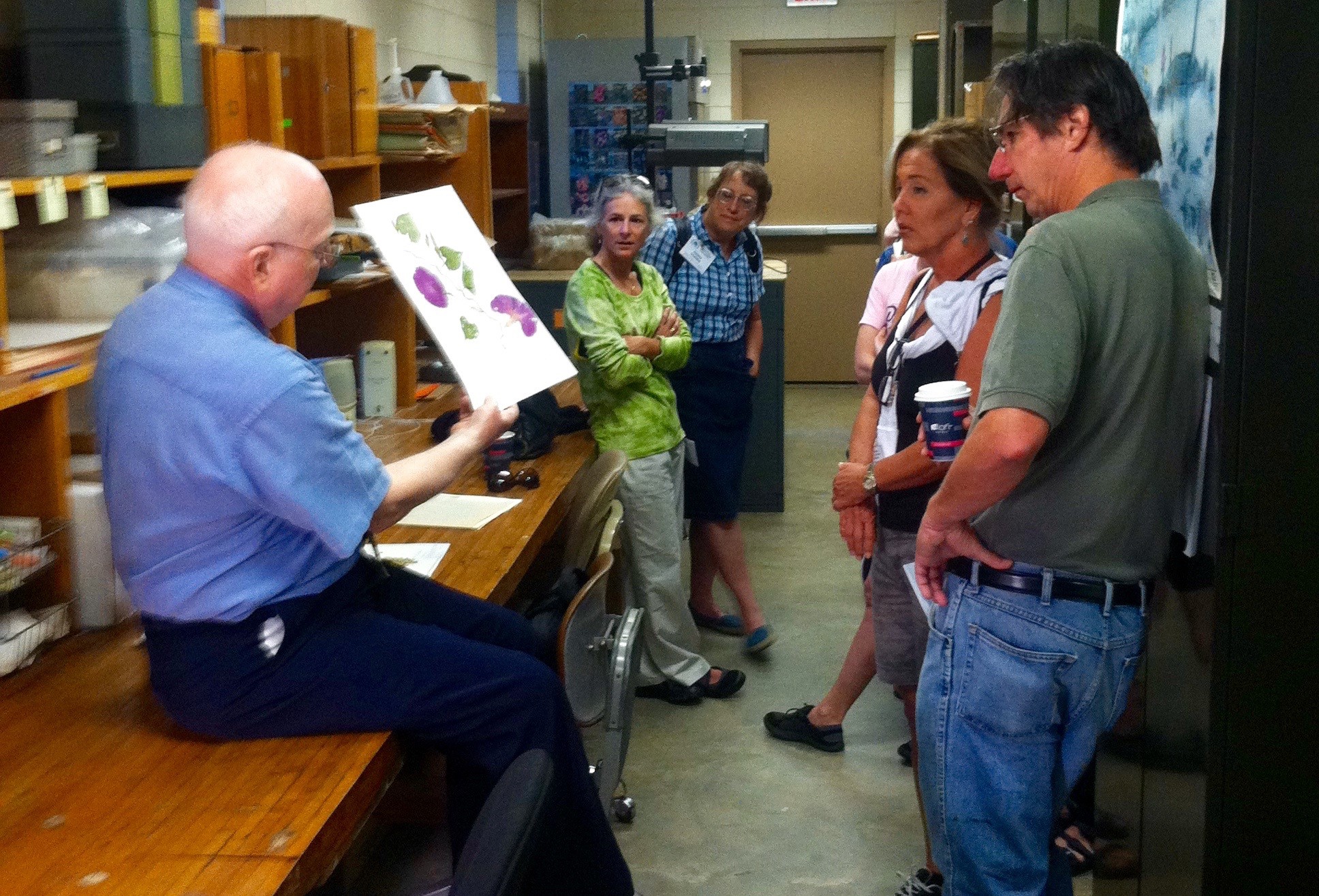 The day began with a tour of the Robert K. Godfrey Herbarium led by Loran Anderson. Dr. Anderson immediately took the group of eight into the stacks and explained how the specimens are organized. He pulled out some of his recent additions to the collection and described the difficulties in preserving plant materials in a way that will most accurately reflect their true colors in perpetuity. He showed off a specimen of Indian pipe (Monotropa uniflora) that is known for it’s ghost-like, white appearance when living, but which turns jet-black when pressed, regardless of the many preservation techniques that Anderson has tried. Another example is this recent addition to the herbarium—a morning glory specimen (Ipomoea indica) whose flowers are blue when living and purple when pressed. Dr. Anderson shared examples of herbarium specimens providing critical data for studies of plant evolution, climate change research, and taxonomy. 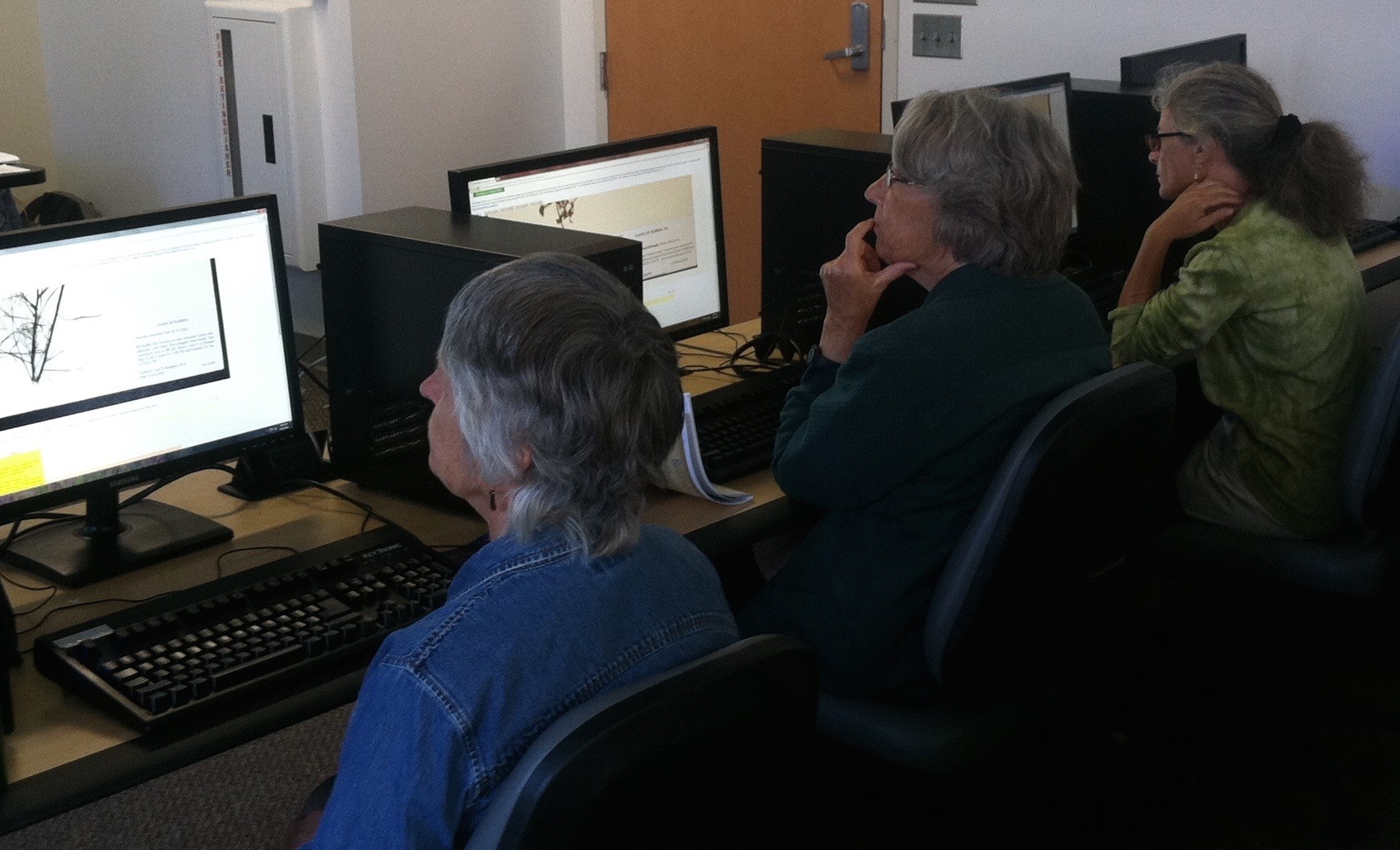 Libby Ellwood walked the group to the computer lab, and, along the way, explained the steps in specimen digitization. Imaging blitz volunteers had created the images that the volunteers of this blitz would transcribe. Austin Mast greeted the group and presented information about the projects involved in specimen digitization. He walked the group through the online transcription site that they would use during the blitz, herbaria@home, a project of the Botanical Society of Britain & Ireland. As a product of fellow plant enthusiasts, herbaria@home was a perfect fit for the event.  Tom Humphries (herbaria@home) generously provided our group with a link to a kml file with georeferences for all FSU specimens produced to that point in the day so that we could watch the number of points growing in Google

Earth. The intrepid citizen scientists quickly got the hang of transcribing and before long were playing GeoLocator—a game where participants track the collection location of the specimens they transcribe and win prizes for such categories as “Furthest Specimen from Leon County”, “Most Specimens from Leon County” and “Specimens from the Greatest Number of Different Counties.” Habitat Bingo came shortly after and participants ticked off habitat keywords such as “river”, “scrub”, and “roadside” in rows and columns. Winners received chocolate, and at the end of the blitz all volunteers received an event-branded canvas lunch bag.

Through the three blitzes to date, thousands of specimens have been imaged and transcribed with the help of dozens of citizen scientists. The blitzes have also provided us with experience in organizing and hosting blitz events, collaborating with institutions and online platforms, and working with citizen scientists. All of these skills will be useful as we plan the Worldwide Engagement for Digitization of Biocollections (WeDigBio) event for October 2015. During this four-day transcription event, collections around the world will host citizen scientists in simultaneous and interactive blitzes. If you are interested in hosting a WeDigBio event at your institution, follow http://tinyurl.com/kgzmelv to be added to the mailing list.

Many thanks to our volunteers from the Florida Native Plant Society and herbaria@home!