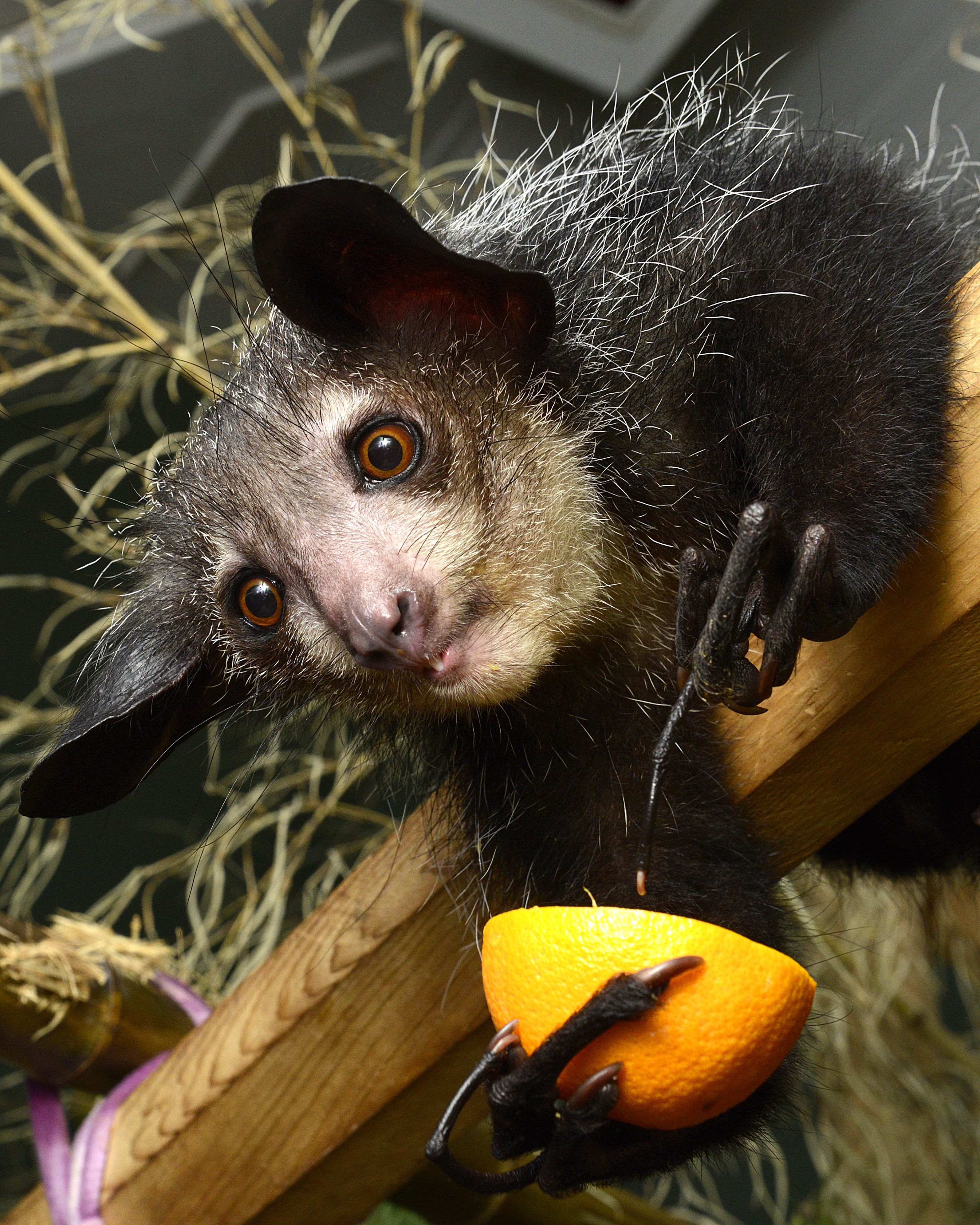 Lemurs are the most endangered group of mammals on earth. Endemic to Madagascar, these primates evolved in isolation from monkeys and apes. Lemurs are highly diverse, divided into eight families consisting of 15 living genera and about 100 living species. Madagascar is one of the poorest countries in the word which unfortunately has led to widespread subsistence farming, which drives habitat loss. Only about 10% of the vegetated landscape in Madagascar remains.
Out of all of the lemur species, the aye-aye  definitely takes the cake for being the most unique. The aye-aye, Daubentonia madagascariensis, looks like it was assembled with spare parts. With its big ears, skeletal middle finger and overall bizarre appearance, the aye-aye is unlike any other creature on this planet. The aye-aye is the only extant lemur species in the genus Daubentonia. It is the largest nocturnal primate and the only primate with rodent-like teeth that continue to grow throughout their lives. Their teeth, along with many of their other unique characteristics have made them historically difficult to classify. They are primarily arboreal, spending the majority of their time high in the canopy searching for fruits and insects.  Their fingers are another uncommon adaptation that allows them to employ a highly specialized method of hunting called tap foraging. Aye-ayes have a long, twig-like middle finger that they use to tap on trees. They then listen for insects under the bark and then gnaw into the wood to find the insects or swivel their elongated, skinny finger on a ball and socket  joint to scoop the insects out.

At last month’s Integrating Institutional Archives with Disciplinary Web Repositories Workshop held at Duke University, many of the workshop attendees had the fortune to visit the Duke Lemur Center. This facility for non-invasive research houses over 200 lemurs from 14 species , the most diverse collection  of living lemurs outside of Madagascar. “The scientific endeavors at the Duke Lemur Center span a remarkable array of disciplines, from behavior and genomics to physiology and paleontology, and the Center is recognized as a global authority on lemur veterinary medicine. Conservation biology is also a major focus, providing the conceptual and operational bridge between the living collections of the center and its outreach activities in Madagascar.”
In addition to the living collection of lemurs, Duke University also has an extensive fossil primate collection. The Division of Fossil Primates’ collection includes “55 million year-old, lemur-like primate fossils from Wyoming; 37 to 28 million year-old anthropoid fossils from Egypt; 19 to 7 million year-old ape fossils from Egypt and India; 13 million year-old New World monkeys from Colombia; and 10,000 to 500 year-old lemur fossils from Madagascar.” The Duke Lemur Center maintains an extensive digital archive at MorphoSource, a project hosted by Duke Libraries. The MorphoSource collection includes scans of skeletons, full cadavers of animals that died of natural causes, and fossils from around the world. 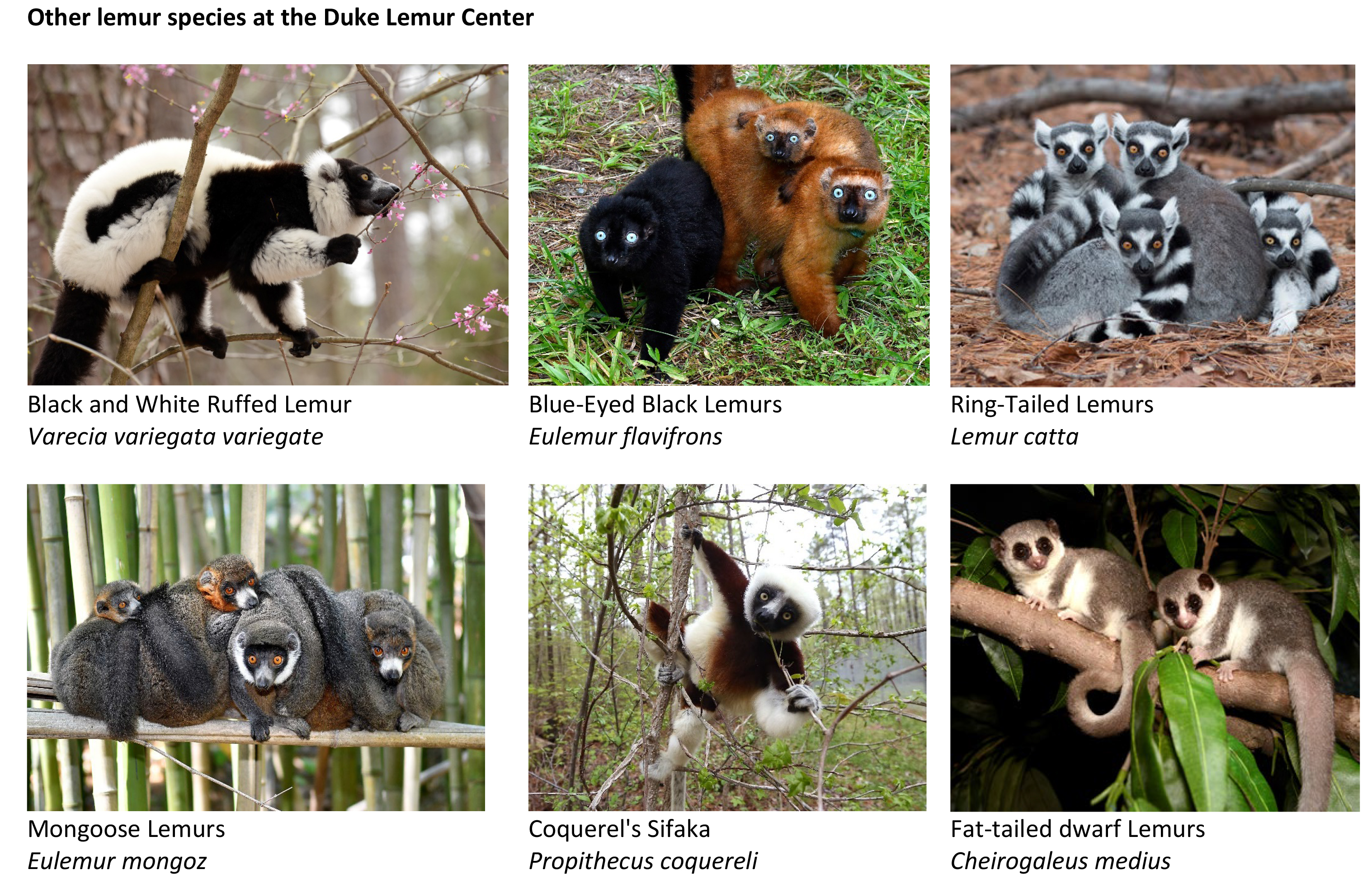