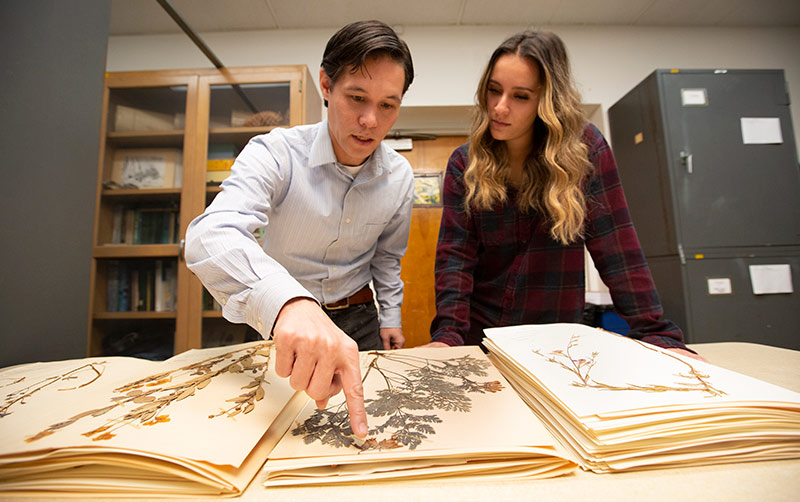 Above, plant biology student Kassandra Rodriguez and her faculty mentor Joshua Der examine the Dicentra formosa, an historic specimen collected by botanist Fay A. MacFadden and part of the herbarium collection.

In a room on the second floor of McCarthy Hall are rows of steel cabinets. Inside are neat stacks of pressed and preserved dried plants — about 30,000 specimens, some dating back to the late 1800s, mounted onto special sheets of paper. The specimens are primarily from Southern California, Mexico, the Pacific Northwest and British Columbia.

Since late summer, biological science student Kassandra Rodriguez has examined the extensive collection of the Fay A. MacFadden Herbarium, acquired by the university more than 50 years ago from the botanist. Rodriguez cataloged and inspected the specimens for pests, readying the plants for a multi-institution, four-year project to digitize the inventory into a searchable database for scientists and the public.

"What's fascinating is that these dried plants are a snapshot in time," said Rodriguez, who is studying plant biology. "Through this collection, we can see when and where the plant was collected, and study whether climate change has affected flowering time."

Rodriguez and four other undergraduate student researchers, under the mentorship of Joshua Der, assistant professor of biological science, are part of a statewide National Science Foundation-funded project to convert the herbarium's collection of California's plants into digital format. The project "Capturing California's Flowers: Using Digital Images to Investigate ​Phenological Change in a Biodiversity Hotspot"​ has 22 participating herbaria throughout California, which includes public universities, state agencies, museums and botanic gardens.

Statewide, the project is expected to produce nearly 1 million digital images of California plant specimens, with plant records dating back almost 200 years. The goal of the project is increase  understanding of the direction and magnitude of the phenology — the study of plants in relation to climate changes — of California’s flora, said Der, who is leading the Cal State Fullerton effort. H. Jochen Schenk, professor of biological science and director of the herbarium, is co-directing the project. The other biological science-plant biology majors involved in the project are Lauren Ballesteros, Daniel Jaques, Lina Luu and Tuesday (Danielle) Weaver.

CSUF received about $40,000 from NSF for its project, which supports improvements to the herbarium infrastructure, stipends for students — the next generation of museum curators, collectors and researchers — and the purchase of imaging equipment.

"Right now, the herbarium is a lost treasure trove of data tucked away in cabinets. But through digitizing the herbarium and publishing the data online, we are making this valuable record accessible to the scientific community for research," said Der, a plant biologist who plans to involve more undergraduates in the project.

Flowering time is an important biological phenomenon, affecting human societies through its effects on agricultural crops, pollinators, pests and biodiversity, Der explained. In addition to photographic images, data about when and where the plant specimen was collected, with an emphasis on documenting the historical timing of flowers and fruit throughout the state, is included.

"Because herbarium specimens can be hundreds of years old, they capture a historic record of plant diversity through time," Der added. "As California faces unprecedented levels of climate change, drought and fire, we can extract baseline information to which we can compare contemporary or future changes in the location of plants and the timing of flowering."

Luu, who began digitizing herbarium specimens in January, relayed excitement about the plethora of plant species.

"This project allows me to be part of a network of like-minded individuals who share my passion," said Luu, who plans on blending a career in botany with architecture. "While I am digitizing, I am able to take a close look at the plant samples and immerse myself in the work. The insight and knowledge gained will serve me well in my future."