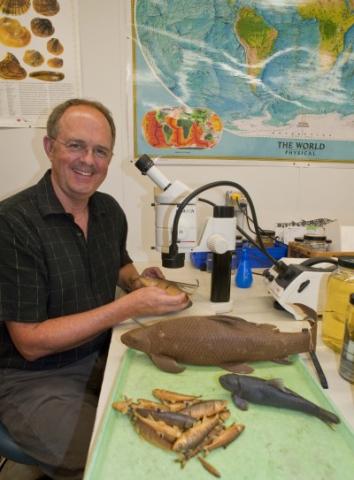 Dr. Larry Page is the Project Director for iDigBio, where he is responsible for overall project management, oversight of the national resource activities, and implementation of the strategic plan. He is based at the Florida Museum of Natural History, where he is Director of the University of Florida Biodiversity Institute and Curator of Fishes. Here, Dr. Page is interviewed by Jill Holliday, executive editor of the iDigBio e-newsletter.

Page: The common thread is my interest in biodiversity.

Holliday: You majored in Biology and your graduate degree is Zoology. What made you decide to focus on fish?

Page: It is a little hard to remember exactly when fishes moved into first place. I did have a couple of small aquariums when I was a kid and I kept tropical fish in them.  That could have been the impetus.  Also, my parents liked to go camping and I would always run down to the closest stream and try to catch the fish and look at them. I wasn’t ever interesting in fishing with a hook and line, but I was always interested in getting out there with a net to see what I could find.

Holliday: What did you do when you caught them?

Page: That is an interesting question. I was always intensely interested in knowing what they were. Being a taxonomist - knowing names of living things - for some reason, fits my personality. Even the fish in an aquarium that I purchased in a store had to be identified. When I was a child, it was often hard to know what they were - hard to get the information. The books weren’t very inclusive, so I would spend time in libraries and go out in the field and try to get more information.  What was found where was my primary interest.

Holliday: Did you write down information about them? Did you look at their coloration and their scales?

Page:  Sometimes, but I didn’t have anything to write with in the water, so often I just looked at them and threw them back and tried to remember characteristics later. In college I was still interested in fish, but I was also quite interested in plants and insects. Those were three groups I found particularly interesting. But in grad school I decided definitely that I was going to study fishes.

Holliday: It has been 40 years since you got your Ph.D. In terms of how we store information – how has technology changed?

Page: Most of my experience has been in fish collections. In the old days, we would go to the field, collect specimens, and bring the specimens back to the lab to identify – that’s all still done pretty much the way we did it 40 years ago. We bring specimens to the lab, sort them out to species, put names on them, catalog them, put the specimens in a jar and put the labeled jars in the collection range. Now, unlike then, the cataloging is done on the computer. Forty years ago we didn’t have computers, and cataloguing was all done with pen and paper. We would fill out a sheet for each collection, write the locality information on the top of the sheet and list the species we collected at that site. Most institutions also had a card catalog, which also had to be either hand-written or typed. So you’d have a sorting sheet, which was a list of all the species at that locality. Then you needed to type an index card for each locality for each species, and all of the cards went into a cabinet that had files for species and the localities where they were found. Also, you had to hand-write or type the label to put in the jar.  Now they are printed from a computer database that also allows online searches for information - a much more efficient arrangement.

Holliday: A lot of collections are only now making the transition from written labels and catalogs to databases that are accessible on-line. Uploading images of actual specimens is still somewhere in the future for many of them. iDigBio is a very forward-thinking undertaking.

Page: That’s right. A lot of the activities at museums or collections are about modernizing what we do within the institution - trying to be more efficient, but we spend much less time getting information out to the end users.  That is what iDigBio and ADBC are trying to correct.

Forty years ago of course we didn’t have automated georeferencing. When we got back to the lab after making a collection, we’d put a dot on a map where we’d been, by hand. This meant if you wanted to do something big, like produce a book such as 'The Fishes of Illinois,' which  my Ph.D. advisor was working on when I was a graduate student, then for each species you had to go to a paper map and put a dot on that map where you had just collected the species. That was what I was paid to do as a graduate student – I put tens of thousands of dots by hand on maps. That’s the way it used to be. Now, fortunately, that process is automated.

Holliday: That’s one of the things I can see with iDigBio, that once people start uploading not just the images, but locality information, then people can generate those maps and that would be terrific.

Page: That will be a huge contribution.

Holliday: How did you originally get involved in IDigBio?

Page: University of Florida and FSU together were funded to be the hub for this national activity, and I’m the lead PI of that effort. I’ve been involved in other large projects with some difficult administrative activities and those activities went well, so I was asked to lead this project. Now that we’re into it, I still think of it as being focused on biodiversity and the collections that document biodiversity. There is more information on biodiversity in collections than in any other form – any other source you can go to on the planet other than nature itself. I think you can take all the publications and all the knowledge that people have -- put all of that together, and there is still more information in collections. Think about all the information there is in just one jar of fish or one bird skeleton. You get a little bit of information when you study them for a research project and publish a paper, but there is much more information there than you can describe. There is an endless amount of information in collections, but it hasn’t been accessible.  ADBC is about getting that information online so that it is easily accessible to all users…and that brings us back to understanding and appreciating biodiversity.

Holliday: What is your ultimate vision for iDigBio?

Page: The reason I’m excited about the project and willing to put so much time and effort into it is because I think that if all of this information gets out and people really understand the value of biodiversity, then they’ll start appreciating nature and hopefully we’ll be able to stop some of the environmental degradation. And at the same time, people will start to understand the importance of biological collections that document biodiversity.

Collections in this country, for the most part, are in pretty good shape. But specimens in other parts of the world, including all of the tremendously valuable specimens collected a long time ago, are deteriorating and falling apart, or the alcohol is evaporating and they are drying out. It is a ridiculous situation. Few people even know the information is there, let alone using it, and so nobody understands its value.  ADBC and iDigBio could have an international impact and turn this around. That’s what the project is all about, making information available for the benefit of society and science.