Autumn is right around the corner, and what a beautiful season it is! Here in Florida, we see the occasional red or yellow leaf during the autumn months, but really, all we can hope for is some cooler weather, and even that isn’t guaranteed. The Kallima inachus seems to agree with us humans in admiring the beauty of autumn, as they have evolved to imitate dead leaves! (Thus giving them their common name, the dead leaf butterfly).

Luckily, dead leaf butterflies don’t live in North America, otherwise I would be afraid of accidentally stepping on one of these beauties during the fall season! So, if there’s anyone reading this in Southeast Asia, you may want to watch out for the dead leaf butterfly before scoping out the perfect, extra-crispy leaf to crunch underneath your feet.

The dead leaf butterfly, also known as the orange oakleaf or the Indian oakleaf butterfly, is interestingly not adapted to blend in with autumn leaves in temperate regions. Being native to Tropical Asia, including Eastern India, Eastern China, and Japan, dead leaf butterflies have evolved to camouflage with leaf litter in tropical and subtropical forests. Dead leaf butterflies are also multivoltine, going through multiple generations a year, and fly from April to October, so their flying period is not related or confined to the autumn season.

When threatened by one of their natural predators, which includes birds, ants, spiders, and wasps, dead leaf butterflies flutter to the ground in a way that mimics a leaf falling. Then, they lay stationery and closed on the ground so as to only show their underside, which intricately resembles a dead leaf with shades of brown, black, and yellow. The dead leaf butterfly’s bright upperside is a distinct pattern of blue, purple, orange, and black bands and heavily contrasts with its dead leaf underside. 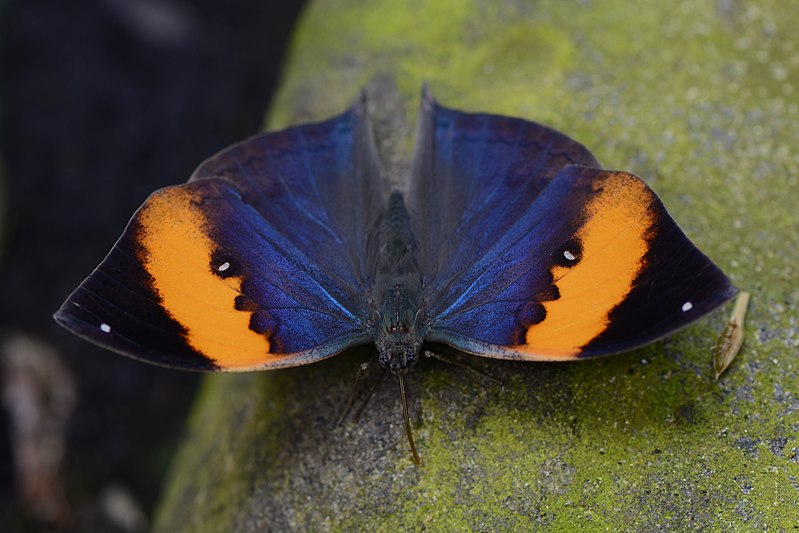