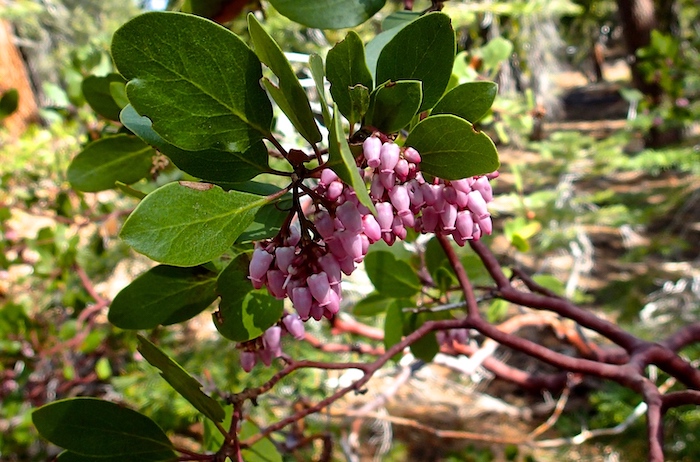 You may have read about in the news, or experienced for yourself, the recent massive fires in California. The SCU and LNU lightning complexes that ignited in August of this year currently stand as the second and third largest fires that the state of California has seen since accurate recording began in 1932. Over one hundred thousand residents had to evacuate their homes, at least seven people have died, and thousands of structures have been destroyed. Aside from the human impact, fires in 2020 have burned over 1% of the state’s total land area, and although California has a long history with fire, the scale of burning is now far beyond the level that many of its ecosystems have evolved to coexist with. In this month’s biodiversity spotlight we talk about a quintessentially Californian, and fire-adapted, plant: the manzanita, i.e. plant species in the genus Arctostaphylos (family Ericaceae). Although manzanita is found worldwide, the epicenter of its taxonomic diversity is in the California Floristic Province, which is home to approximately a hundred species and subspecies of Arctostaphylos. Of the 72,785 manzanita records in iDigBio, 75% were collected in California.

Within California, you can find Arctostaphylos species occupying an incredible diversity of habitats. The common name “manzanita” means “little apple” in Spanish, while the scientific name of the genus, Arctostaphylos, can be roughly translated to “bear berry” from its Latin roots. Approximately half of the manzanita species in California are classified as rare, threatened, or endangered. The success of many of these rare species is directly linked to the occurrence of fire in their habitats. Manzanitas have evolved to coexist with intermittent fire through two distinct strategies. Some manzanita species, like the widespread Arctostaphylos patula, or greenleaf manzanita, grow a lignotuber, which is a fleshy mass at the base of the root crown that protects the plant stem from fire, among other hazards. Lignotubers, commonly called burls, contain buds and extra nutrients that allow a plant to resprout even after the bulk of its above-ground mass has been destroyed. Other manzanita species do not grow burls and are instead obligate seeders, which means that adult individuals may die in a fire but the population is subsequently replaced by the seed bank. This can be a successful strategy because it facilitates shorter-lived generations and therefore offers more opportunities for genetic change.

Arctostaphylos patula is widespread throughout montane chaparral and coniferous forests in the North American west. If you’ve ever been hiking in Yosemite, Bryce Canyon, or Crater Lake National Parks, there’s a good chance you’ve encountered this species before! On the other hand, if you’ve encountered Arctostaphylos regismontana, or Kings Mountain manzanita, it’s probably because you were seeking it out. This species is endemic to California and has an extremely limited range, with most recorded occurrences located on or near the eponymous Kings Mountain. Arctostaphylos regismontana was first identified by Alice Eastwood, a legendary figure in the history of California botany. Eastwood was a curator at the California Academy of Sciences in the early 1900s and prolific both as a collector and a taxonomist. She is also credited with saving the botanical type specimens of the California Academy of Sciences from fires in the aftermath of The Great 1906 San Francisco Earthquake, which she was able to do because she had recently undertaken a project to reorganize the collection and move all types into designated cabinets. Thanks to the digitization efforts of the Academy you can now see a scanned image of many of their type specimens, including that of Arctostaphylos regismontana (below). Today, this manzanita species is threatened by urbanization, as well as poor regeneration, perhaps due to a lack of fire in its habitat combined with its reproductive strategy of obligate seeding. 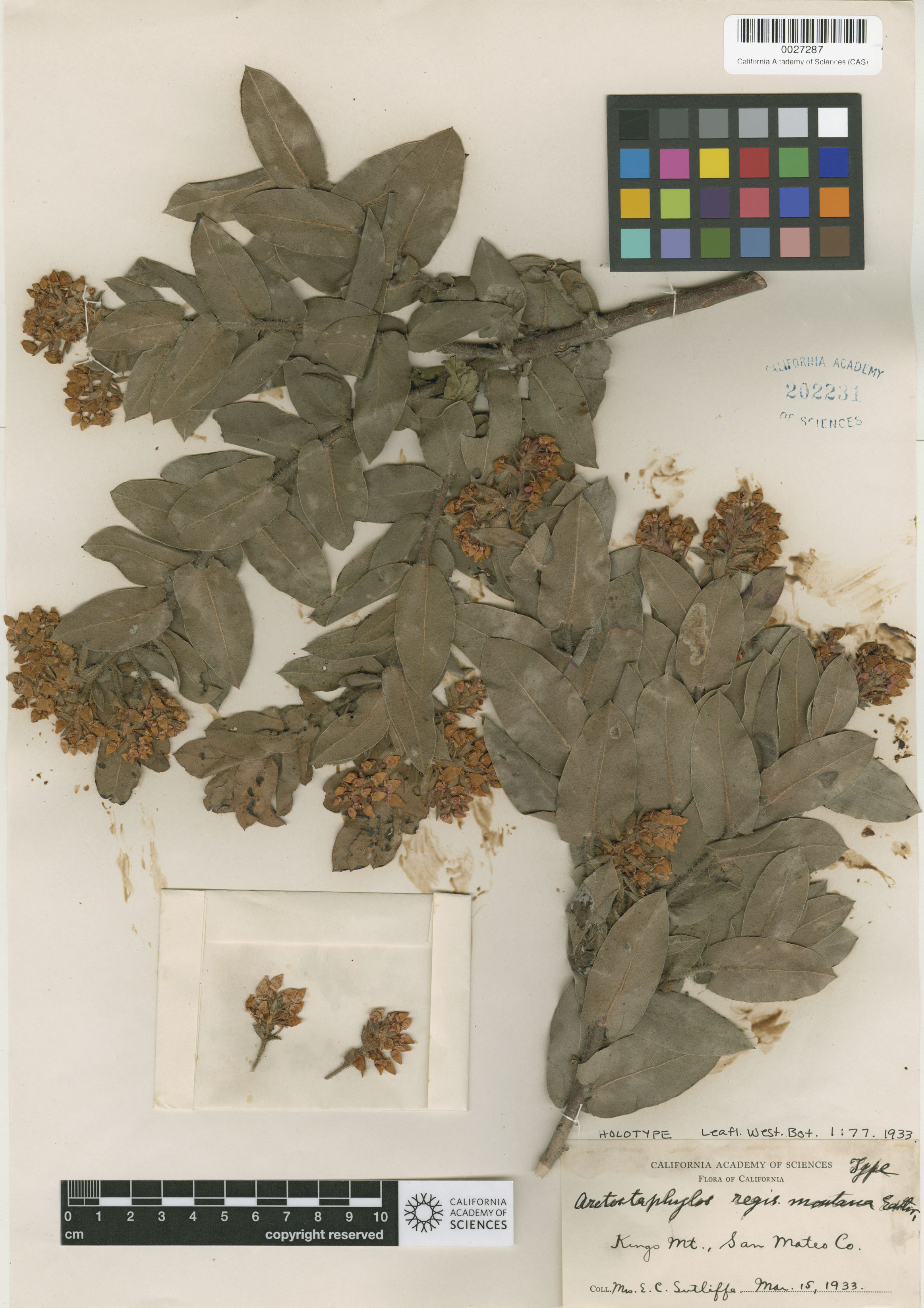 Another rare, obligate seeder is Arctostaphylos silvicola, or Bonny Doon Manzanita, which has a limited range in the marine sand deposits of the Santa Cruz Mountains, just south of where Arctostaphylos regismontana occurs and in an area that burned in the August 2020 CZU lightning complex fire. Arctostaphylos silvicola is a stately plant that often grows as tall or taller than a human, and has beautiful deep red bark contrasting with its gray-green foliage. Check out what a gorgeous plant this is by looking at the observations that citizen scientists have made of it on iNaturalist. People have been observing Arctostaphylos silvicola for a long time, as you can see with this image (below) taken in 1935 as part of the Wieslander Vegetation Type Map Survey, a study funded by the U.S. Forest Service to collect data on 70 million acres of land in California. Manzanitas were an intentional focus of the Wieslander survey, as the Forest Service recognized that knowledge of these plants had practical applications for fire protection policy and fuels management. Although earlier observers presumed that burls grew in response to contact with fire, scientists working on the Wieslander survey noticed that even young plants of certain species grew burls, indicating that they were an innate structure (read more here). 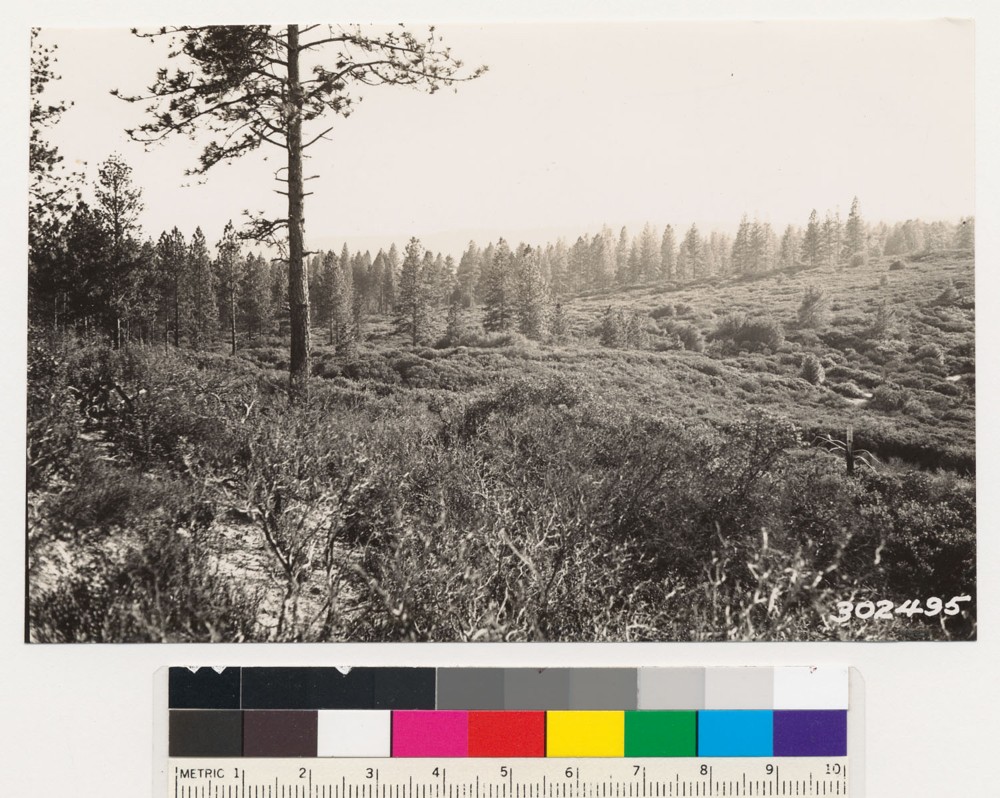 The presence or absence of burls is now used as a major diagnostic feature in identifying Arctostaphylos species, one that was initially employed by another of California’s preeminent 20th century botanists, Willis Jepson. Perhaps because of its broad geographic distribution and taxonomic diversity, or possibly because of its charming personality, Arctostaphylos was something of a through line for well known 20th century California botanists. Both Willis Jepson and Alice Eastwood described many manzanita species for the first time, and Albert Wieslander, of the survey mentioned earlier, was Jepson’s student at the University of California Berkeley. That’s not to say these botanists always connected over manzanita in a collegial way. For instance, botanical lore has it that Willis and Eastwood had a spiteful professional relationship exemplified in the naming of Arctostaphylos jepsonii. Eastwood described and named this species after Jepson, an act typically seen as a tribute. Unless, of course, you’re describing a new species that you know is invalid because it is a hybrid, thus forever prohibiting the name Arctostaphylos jepsonii from being bestowed on a legitimate taxon.

Whether you are skiing near Lake Tahoe, hiking in the redwoods, at the beach in Big Sur, or exploring in the desert, you’re never far from a California manzanita species. So grab a field guide and get to know this diverse genus!