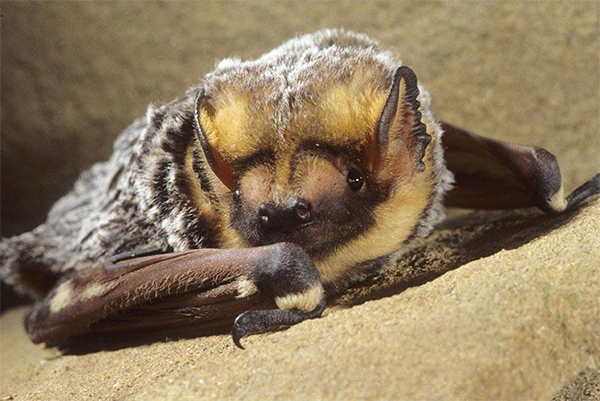 Article by: Caitlin J.Campbell, Graduate Assistant at the UF Department of Biology
When you think of animal migration, you might envision vast herds of caribou or wildebeest trekking through expansive taiga or savannahs; or perhaps small songbirds or butterflies carried by winds across broad stretches of the earth. It may surprise you that some of the most numerous and impressive of long-distance animal journeys are likely undiscovered, or just beginning to be understood by science. Among the longest seasonal migrations in North America is a little-known insectivorous bat dubbed the “sky lion.”
The hoary bat, Lasiurus cinereus, is twice named for its silver-tipped fur: “hoary” means touched with grey, as if by age or frost; and “cinereus,” ashy. Hoary bats have mixed yellow and black layers of insulating fur, with dramatic yellow faces and black-lined eyes and ears. Hanging from a pine tree, the silver outer coat of fur blends in perfectly. They are adapted to survive cold snaps, with round ears that resist frostbite, tufts of fur along their wings, and a broad furry tail membrane that they wrap around themselves like a blanket. 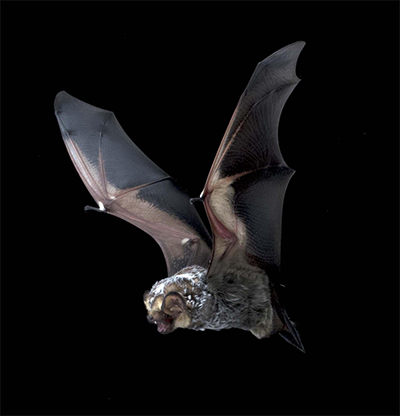 They are among the largest and swiftest bats in the Americas. Their broad black wings are brightly marked with red and orange, and their powerful flight and echolocation calls lets them selectively chase down the largest and most desirable insect prey. The family of bats containing the hoary provides billions of dollars in services controlling crop-eating insects that would otherwise be spent on pesticides or absorbing crop losses.One of the widest-ranging species of bat, they are found from northern Canada through Argentina. Remarkably, their powers of long-distance flight have led some migrants to colonize distant oceanic islands including the Galapagos, Bermuda, and even Hawai’i-- twice!
Twice a year, hoary bats disperse across North America, with the females flying first and furthest from their wintering grounds to find the best habitats in which to raise their young. Males tend to trickle north later, and stick closer to their wintering grounds overall. However, the precise locations of these habitats remains fairly unclear. Even at the best of times, hoary bats are hard to study: they fly high and fast over treetops, difficult to capture in mist nets, migrating quietly without relying on echolocation to navigate (making them hard to eavesdrop on). Their small size makes them too small for advanced satellite tracking, and their wide-ranging nature makes them very difficult to track using radiotelemetry for more than a few days while they’re on the move. In a rare case where a bat returned to his summering grounds with a location logger, it turns out he flew more than 1000km through the pacific northwest in one month! 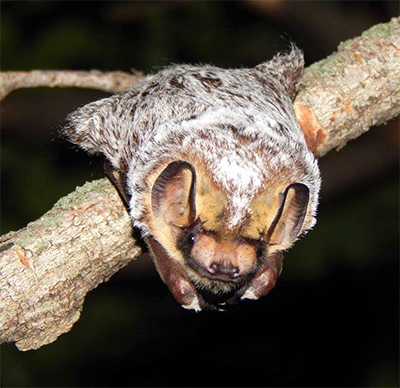 This vast gap in our understanding of where and how hoary bats migrate is a huge impediment to their conservation. While the majority of cave-hibernating bats in North America are threatened with extinction due to the introduced disease white-nose syndrome, several of those that migrate instead of hibernating are at risk due to wind turbine development. Despite its relative rarity, the hoary bat is the most commonly killed species at North American wind turbines, with mortalities spiking during its fall migration and mating season. Understanding the details of how and why hoary bat migration is impacted by wind development is crucial to the survival of the species. Fortunately there are some very promising developments with prediction and deterrent technologies to keep migrating hoary bats away from turbines, and there is more and more interest in understanding the best ways to site and equip turbines to minimize impacts on wildlife.
Photo Credit:
Photo 1: Taken by John MacGregor
Photo 2: Taken by Brock Fenton
Photo 3:  taken by Eric Hough released under license from iNaturalist