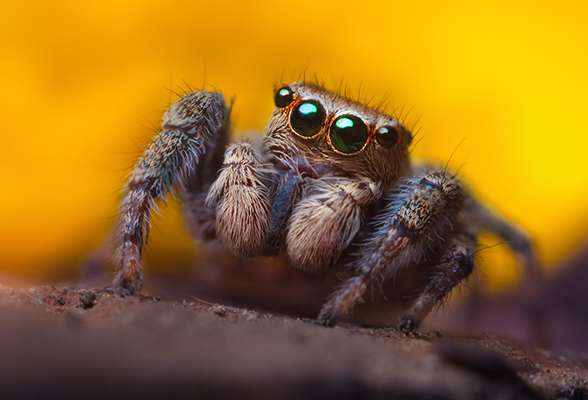 Written by: Alnycea Blackwell and Cat Chapman
What has great vision, jumps, dances and can kill prey larger than their own size? The jumping spider, of course. Jumping spiders (family Salticidae) are known for their jumping abilities. They use this skill to capture prey. They locate prey, stretch out their legs and propel themselves towards the meal, which is usually tiny bugs. All they need is a dash of venom, and it’s feast time. They don’t even need a web to catch their food like other spiders. That’s not the only difference between jumping spiders and other spiders. 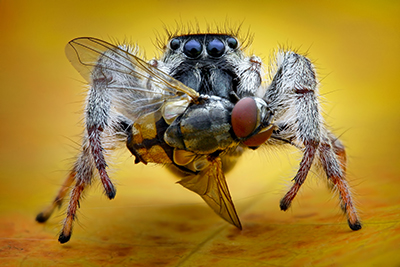 Jumping spiders can be differentiated from other spiders because of their great vision.  They have eight eyes that are grouped: four large eyes on the face and four smaller eyes on top of the head. Each set of eyes have a different function. For instance, the two large eyes in the middle of what might be perceived as a spider’s forehead, are the primary ones, and they detect detail and color. For the other three sets, the foremost set gauges movement, the set in the back looks backward (of course) and a middle set is still a bit of an enigma. This leads them to have fantastic vision that helps them pursue and hunt prey and make some amazing leaps!
There is an array of jumping spiders in different colors, shapes and sizes. A 2015 paper, from the Journal of Arachnology, said that over 5800 jumping spider species have been recorded so far. Which makes the jumping spider the biggest group of spiders on the planet. One of the most common spiders in this group is called the Zebra Spider. The Zebra back spider (Salticus scenicus) is a jumping spider familiar in the northern hemisphere. Their name is a reference to the colors of the spider’s appearance: black and white. 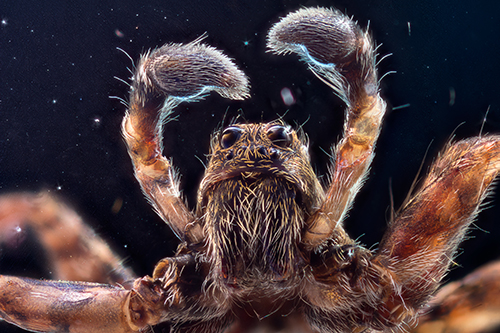 Their scientific name, Scenius, a Greek term, meaning “theatrical” or “of a decorative place,” refers to the zebra-like colors of the spider. Salticus refers to their ability to move quickly and easily. It is a Latin term for “dancing,”  When a male jumping spider comes across a female - he begins a detailed courtship dance. It is a bid to woo a potential mate, by showcasing their moves and colorful mouthparts.

They move their limbs in a rhythmic way. They show zigzag movements and vibrations. If the female is impressed with the male’s dancing, she will allow the male to mate with her. If the female is not impressed, however, the male will simply be ignored if he is lucky, or, if he is unlucky, he may become the female's next meal. Tragically enough, even if the male is lucky enough to mate with the female, even after a successful copulation the female may still decide that she is in need of a snack, and what better snack than the body of her soon-to-be ex lover? 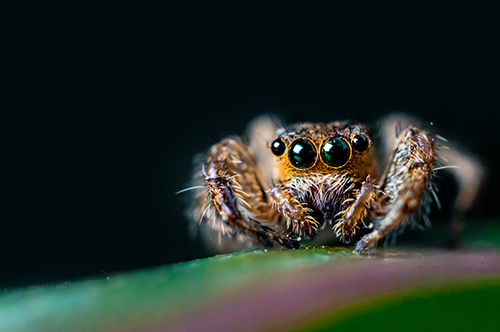 Jumping spiders are also known for their remarkable intelligence in the arthropod world: they have demonstrated the ability to plan detailed routes and detours; this is a quality typically only seen in larger creatures, such as vertebrates. Experiments from New Zealand’s University of Canterbury have demonstrated that jumping spiders possess “genuine cognition” - jumping spiders think before they act! If you are on the lookout for jumping spiders, remember they are tiny. Their size is less than a half inch in body length.  They can be hopping around in your backyard, so keep your eyes peeled for these fuzzy little creatures.