Plants in the City: The MAM Project Explores Virtual Herbaria and Their Uses

On 29-30 March 2019, the Mid-Atlantic Megalopolis (MAM) Thematic Collections Network (TCN) convened their last, official, in-person event at Rutgers University in New Brunswick, New Jersey, which included a business meeting, poster session, symposium and hands-on workshops. MAM collaborators got together on Friday afternoon to share digitization updates and give synopses of their current and future research using MAM data, with representatives from eleven of our thirteen MAM institutions in attendance. We were fortunate enough to be able to have two collaborators from institutions that are having their collections digitized by a partner institution in MAM attend and meet the entire consortium for the first time. It was interesting to hear from them how this digitization project has increased the visibility of their collections and facilitated their own work. We concluded with an open discussion on two topics: 1) the MAM Project capstone paper, and 2) image serving/storage options for the Mid-Atlantic Consortium for the future (i.e., post-NSF funding).

A dozen undergraduate and graduate students from Rutgers University, Howard University, and the University of Pennsylvania presented their research at a lively poster session on Friday evening. Research topics centered around the effects of urbanization on biodiversity, biodiversity engagement, and research using data from the Mid-Atlantic virtual herbaria.

Saturday began with a three-hour symposium on the topics of research and public engagement using herbarium specimens. The speakers presented a good breadth of approaches to using (virtual) herbaria to learn more about plants and their environments. We started the morning in New England with Patrick Sweeney of the Yale University Herbarium kicking off the symposium with a discussion of research outcomes from the New England 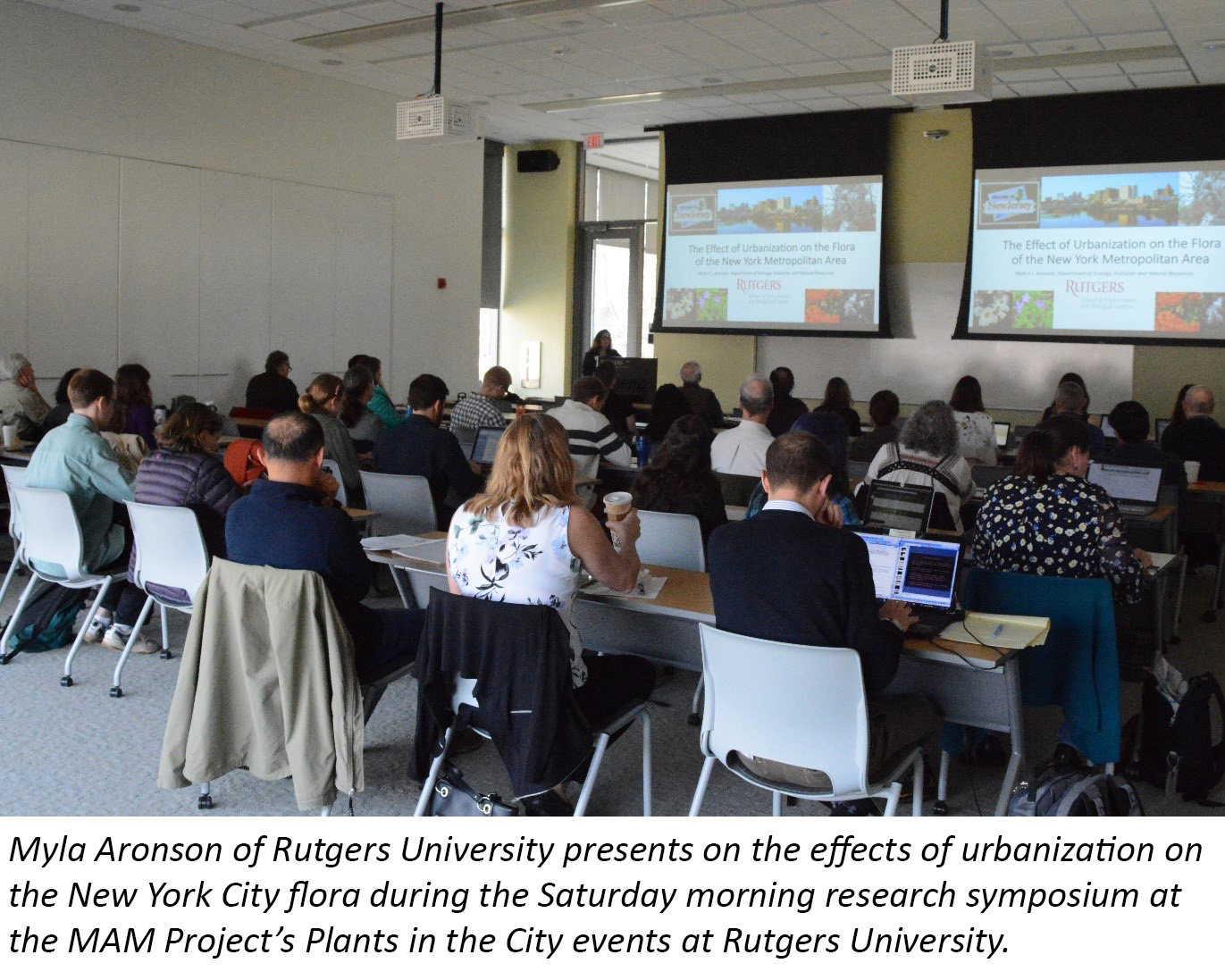 Vascular Plants (NEVP) TCN, particularly work looking at phenological changes in New England plants, after which Emily Meineke of the Harvard University Herbaria talked about both her thesis and postdoctoral studies on plant phenology, cities, and plant-insect interactions using herbarium specimens. Mason Heberling of Carnegie Museum took us west to Pittsburgh in a presentation on his postdoctoral work studying the traits of invasive plants of that metropolitan area. After the break, we headed east again to New York City with Myla Aronson of Rutgers University discussing the effects of urbanization on that region’s flora. To end we headed west once more, this time to Chicago when Matthew Von Konrat of the Field Museum told us about his long-running community science project involving liverworts – ermmm, I mean, microplants – and his quest to better understand the diversity of these fascinating taxa through, literally, millions of tiny leaf measurements made by himself, colleagues, students, and the general public.

Following on from the symposium, we had two sets of three concurrent workshops from which to choose. The first set included Matthew Von Konrat detailing the nitty gritty of how to set up and run a successful online community science platform, while Lena Struwe of Rutgers University led a workshop about biodiversity engagement using iNaturalist, and Richard Alomar of Rutgers University took a group outside to learn how to better observe their surroundings through botany sketching. Our last set of workshops included Patrick Sweeney’s hands-on walk through the phenology scoring module in Symbiota, which was developed by the NEVP TCN and Edward Gilbert of Arizona State University, a hands-on GIS workshop where participants learned how to quantify and geographically characterize landscape change with Myla Aronson and Ameen Lofti, both of Rutgers University, and, as fitting for an herbarium digitization project, a tour of the Chrysler Herbarium of Rutgers University by its collections manager Megan King.

It was a thought-provoking day and a half for all in attendance, and a positive conclusion for the NSF-funded portion of the Mid-Atlantic Consortium. At the events on Saturday, attendance totaled roughly 60 people, with about 2/3 being members of the public and 1/3 MAM participants. Public participants included undergraduate students from Rutgers, faculty at local community colleges and high schools, and members of local environmental and botany groups. A major recurring topic of conversation for MAM participants throughout the events was the sustainability of MAM, both the data and the consortium itself; we feel positive about our ability to keep all of this going once the grant funding ends. Many thanks to Myla Aronson, Megan King, and Lena Struwe of Rutgers University for organizing and hosting all of this! We would also like to thank the National Science Foundation for supporting the entire digitization project as well as these events, and Rutgers University and the Morris Arboretum of the University of Pennsylvania for support for these events.