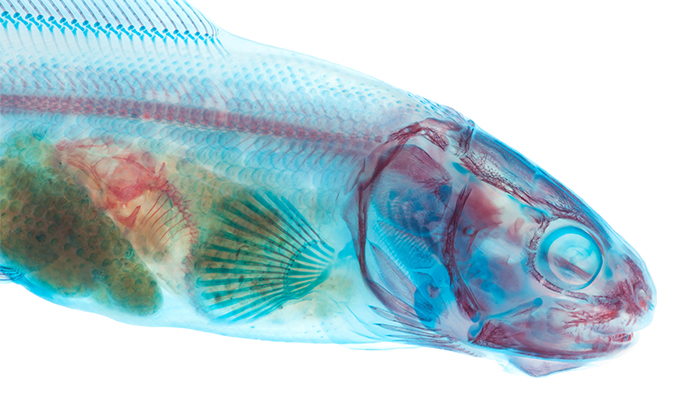 Clearing and staining is a common practice for examining the skeletal anatomy of vertebrates without destroying the specimen, and most commonly used on fishes, reptiles, and amphibians. The procedure of clearing and staining can take from a few days up to a few months depending on the size of the specimen, with the specific anatomical feature to be examined dictating the procedure. In the commonly used double stained procedure, the inner organs are removed and the specimen is kept in a solution with a digestive enzyme called Trypsin. This enzyme digests away all of the connective tissue but does not digest the collagen, which keeps all of the skeletal elements in place. Two specific types of dyes are used - Alizarin red to stain the bone and Alcian blue to stain the cartilage. After staining, the specimen is permanently stored in glycerin which has the same refraction index (how light spreads from one medium to another) as the collagen, rendering the specimen clear. This cleared and stained image of a Bowfin from the Florida Museum of Natural History ichthyology collection won first place in the University of Florida’s 2015 Elegance of Science photography contest. 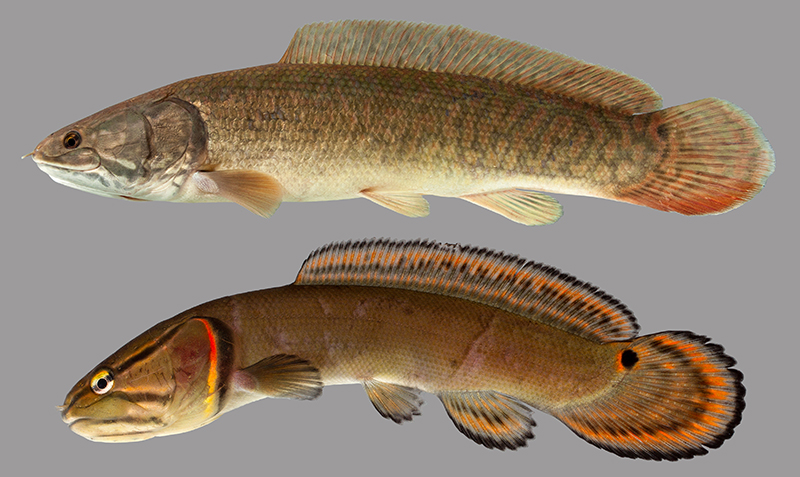 The Bowfin, Amia calva, is the sole surviving member of a group (order Amiiformes) that was known to occur in the late Jurassic period, about 250 million years ago. The species is native to eastern North America and commonly found in standing water near vegetation and woody debris. The Bowfin can reach up to 4 feet in length and is easily identified by primitive features which they shared in common with their closest living relatives. Some of these features include a large bony plate (gular plate) found on the underside of the head, a rounded (heterocercal) caudal fin, and a lung-like gas bladder. Smaller individuals have a conspicuous black spot at the upper base of the caudal fin. Common names for the species include bowfin, mudfish, dogfish, and cypress trout. Bowfins are highly predatory and feed on other fish species as shown by the small fish skeleton found in the stomach of the cleared and stained individual.