Catocala Moths
Article and photos contributed by Larry Gall from the LepNet TCN
Insect herbivores and their host plants constitute nearly half of the earth's species-level diversity, and butterflies and moths (order Lepidoptera) are a prominent herbivore clade that impacts terrestrial biomes.  North America is home to some 14,300 Lepidoptera, spanning 86 families, out of the 157,000 species described worldwide.  Museum collections in North America contain a bounty of up to 15 million lepidopteran specimens, yet only about 5 percent have been digitized.  The Lepidoptera of North America Network (LepNet) TCN, a partnership among 27 US collections led by Northern Arizona University, is building a resource of occurrence records and digital images to mobilize this untapped information for research.  As of early December, LepNet has generated 2,290,958 occurrence records from museum specimens.  The majority (94 percent) of the museum specimens are identified down to the species level, and more than 75 percent have been georeferenced, although digital images are available for only 8 percent.

Figure 1. Wing pattern diversity in Catocala moths.  Clockwise from upper left: C. concumbens YPM ENT 451082; C. neogama YPM ENT 766840; C. relicta YPM ENT 778399; C. cerogama YPM ENT 447987; C. myristica YPM ENT 563699; C. cara YPM ENT 447986.
Because the partner collections have quite different holdings, LepNet has been assembling representative digital data for as many species as possible, while also diving deeper into selected taxonomic groups.  LepNet has an advisory board that helps prioritize and link these digitization efforts to active student research projects that are seeking digital data.  For example, Nick Homziak at the University of Florida is conducting doctoral work on the molecular phylogenetics and evolution of color patterns in one such taxonomic group, the moth genus Catocala.  This genus comprises over 300 species that feed on deciduous trees and shrubs in the temperate Holarctic region.  Some of the diversity is represented in Figure 1 by LepNet digital images from the Entomology Division at the Yale Peabody Museum of Natural History.

Figure 2.  Variation in forewing pattern in Catocala micronympha.  Left, live male resting on hickory bark. Right, four other forewing variants in C. micronympha.
Catocala are also known as underwings, because their cryptic forewings conceal boldly patterned hindwings when the adult moths are at rest on tree trunks during the daytime.  When startled from their resting places, the adults bolt and fly swiftly, with the flashy hindwings serving to distract and confuse would-be predators and researchers alike.  In most species the adult hindwings do not vary in color or maculation, whereas the forewings are quite diverse, as exemplified by the widespread and common North American species Catocala micronympha (Figure 2).  Not to be outdone by the adults, Catocala caterpillars are likewise magicians of disguise (Figure 3). 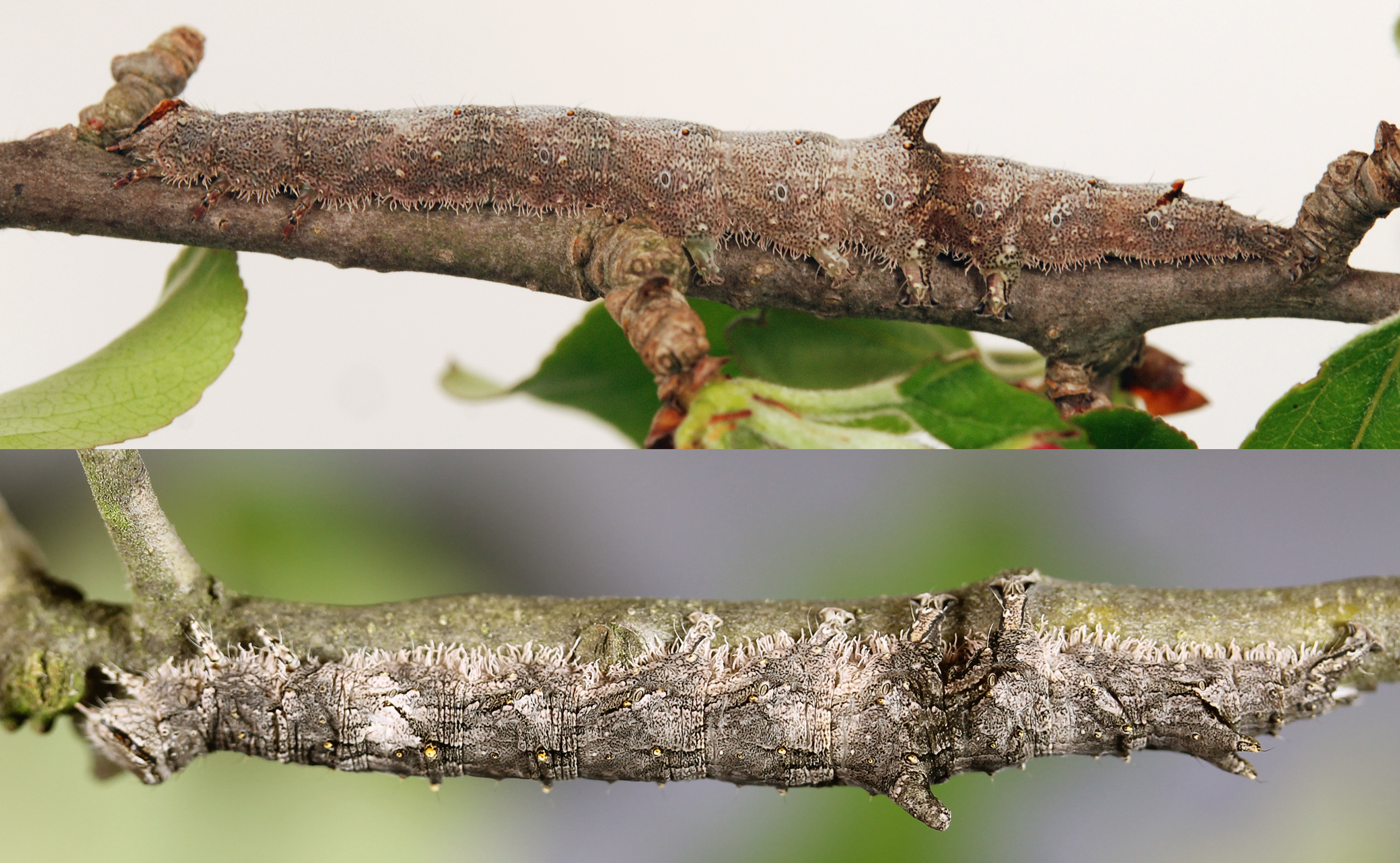 Figure 3. Mature larvae of Catocala grynea (above) and Catocala coccinata (below) resting on their foodplants apple and oak, respectively.  Note the fake "leaf scars/buds" on dorsal and lateral surfaces.
LepNet is also integrating museum specimens with observational records and images from online platforms such as iNaturalist, BugGuide and The Lepidopterists's Society Season Summary.  This helps catalyze research synergies, given that a number of butterfly and moth groups like Catocala are huge favorites among naturalists and collectors because of their size, coloration, habits, abundance, and observability.  Sometimes unrelated synergies resonate -- underwing species are often named after celebrated women in literature and history (viz. Catocala agrippina, cleopatra, delilah, desdemona, judith, sappho, for example), although LepNet has yet to define any digital correspondences here.
Click here to view specimen records from the Catocala genus in the iDigBio portal.
References
Seltmann, K. C., Cobb, N. S., Gall, L. F. et al.  2017.  LepNet: The Lepidoptera of North America Network.  Zootaxa 4247: 73-77. https://biotaxa.org/Zootaxa/article/view/zootaxa.4247.1.10
Symbiota Collections of Arthropods Network (SCAN)