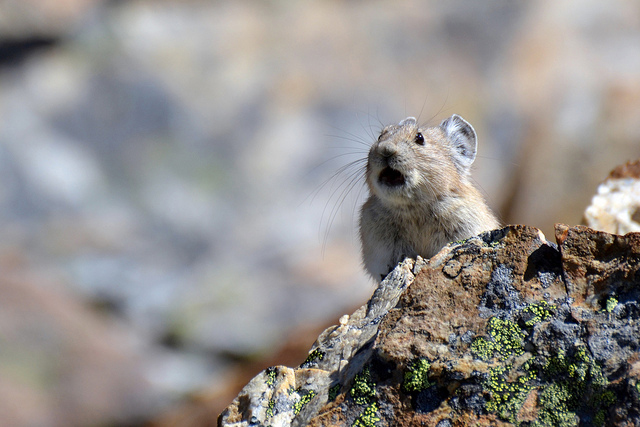 Pikas are small mammals in the order Lagomorpha. They belong to the family Ochotonidae, which comprises one extant genus (Ochotona) and 30 species. The majority of pika species occur in Asia, 24 of which are found in China.

American pikas (Ochotona princeps) are one of two species in North America. They occur in the mountainous regions of the western United States and Canada. American pikas are generalist herbivores that selectively store vegetation in caches for the winter. They normally select vegetation with higher nutrient content but will also cache, or store, plants with low levels of toxins. The toxins in the vegetation are thought to act as preservatives, and this vegetation is consumed only during the winter when the toxins have lost their potency.

American pikas use vocalizations and scent marking to communicate with one another. They produce two types of vocalizations, short calls and long calls. Short calls, also known as alarm calls, are used when intruders or predators are present. These alarm calls change frequency dependent on predator type. In contrast, long calls are almost exclusively produced by males during the breeding season.

American pikas may be negatively impacted by future climate change because of their intolerance for high temperatures and their poor dispersal abilities. Several pika population monitoring projects are underway, including one project that is using the website iNaturalist and the help of citizen scientists to collect data on pika distribution.