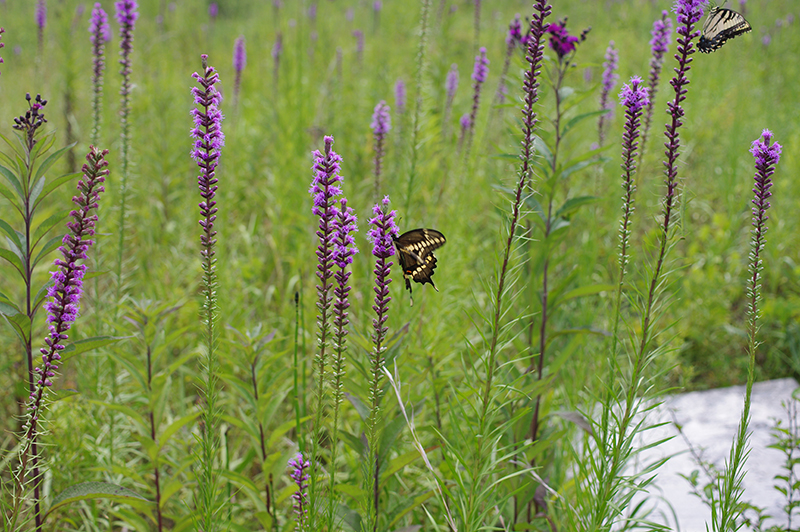 All images courtesy of Heather Cray 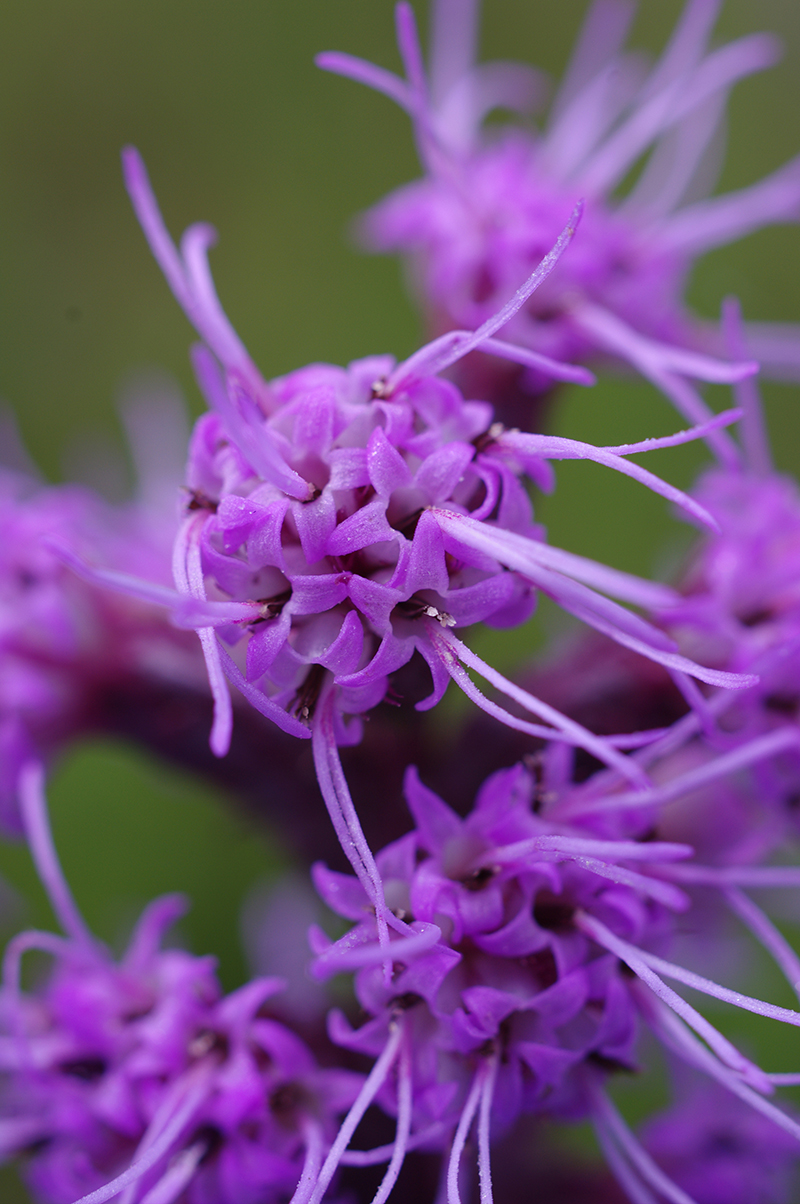 Dense Blazing Star (Liatris spicata) is one of those native plants species we’re not used to seeing in the Northern Hemisphere – it is bright pink, tall (up to 2m/6.6 ft), has spirally arranged, grass-like leaves… in other words, it’s a striking plant. Outside of garden escapees, People in the United States may find this species in the eastern half of the country from Maryland, Massachusetts, and New Jersey in the Northeast through Pennsylvania, Ohio, and Michigan, to Wisconsin in the Northwest, and South to Alabama and Arkansas, Mississippi, Georgia, and Florida.

Canadians, however, will have to undertake quite the trek to check this beauty off of their life lists because the species is listed as Threatened under the Endangered Species Act, and is restricted to a few remnant or restored patches of tallgrass prairie habitat in the province of Ontario. Part of this rarity is a habitat issue. Only 1-3% of tallgrass prairie habitat remains in North America (Sampson 1996), making it our continent’s most endangered ecosystem. Even within this context, Dense Blazing Star is exceptional; only ten extant populations are known in Ontario and its numbers are declining annually. Other threats to the species include the spread of woody species into grassland habitat, invasive plants, and various management practices such as mowing, lack of prescribed fire, and herbicide use (COSEWIC Assessment and Status Report).

So what’s special about this plant? Aside from its impressive inflorescence (flower spike) that measures up to 70cm/2.3 ft long, Dense Blazing Star is able to grow in soil that is contaminated with cadmium, turning the toxic heavy metal into a non-toxic form in its tissues (Ontario 2016). It also supports a wide variety of pollinators. Bees, butterflies, and beetles are the main pollinators for Dense Blazing Star, and in Michigan and Ohio the plant is also a host for the critically imperiled Blazing Star Stem Borer Moth (Papaipema beeriana) (COSEWIC Assessment and Status Report). 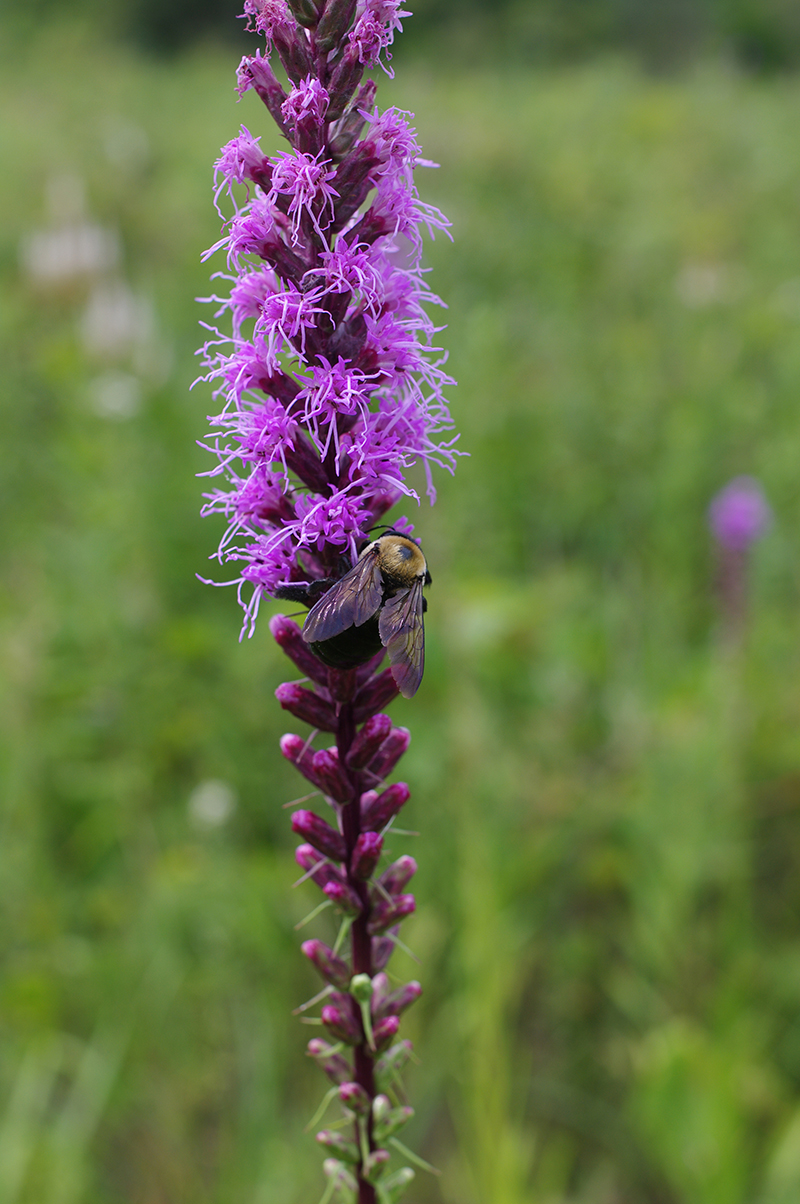 Dense Blazing Star thrives in full sunlight and makes a great cornerstone for a butterfly or bee garden, mixing with other showy natives such as Ironweed (Veronia sp.), Sneezeweed (Helenium autumnale), Virginia Mountain-mint (Pycnanthemum virginianum), and Butterfly Milkweed (Asclepias tuberosa) to provide habitat and color from Spring to Fall. In your backyard garden, up to 15 spectacular flowering stems can be expected from a 3 year old plant, and plants are perennial, living 3-5 years and reproducing by seed or by budding or dividing corms (COSEWIC Assessment and Status Report). Buyer beware though – cultivated stock is often a hybrid between L. spicata and the non-native L. pycnostachya so be sure to grab your new best friend from a trusted source. If you would like to keep this species healthy and happy in the wild for future generations to enjoy, consider supporting a tallgrass prairie conservation association or charity by purchasing seeds, donating to conservation efforts, or subscribing to their newsletters for new and exciting conservation and restoration research.