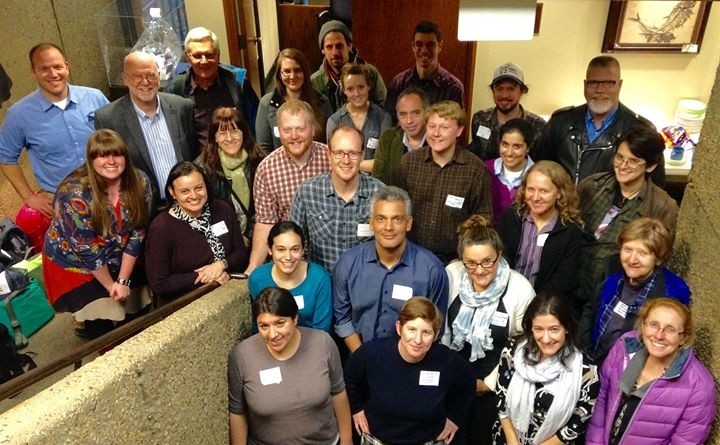 Twenty six paleontologists, data managers, researchers, graduate students, end users, and developers congregated at the Geological Society of America (GSA) offices in Boulder, CO February 29 and March 1 to launch the recently funded ePANDDA project (Enhancing PAleontological and Neontological Data Discovery API) and to fine tune the project’s plans, goals, and dreams. ePANDDA is the outgrowth of ongoing data-sharing discussions in the paleontological community and is a venture between the PaleoBiology Database (PBDB), iDigBio, and iDigPaleo, the outreach portal being pioneered by the Fossil Insect Collaborative TCN. This new cooperative is designed to facilitate interoperability and enrich data sharing between its partners, including methods that allow iDigBio to discover and build annotations for specimen-related literature citations and PBDB to build pathways that allow easy access to iDigBio’s specimen-related data. The end product will be an Application Programming Interface (API) that serves as a single entry point for querying these important data sources. iDigBio is pleased to be represented in the ePANDDA project.

The meeting served as ePANDDA’s initial end-user workshop and was focused on enhancing understanding of the features and content of PBDB, iDigBio, and iDigPaleo as well as to explore potential use cases that might guide the project’s development. Researchers outlined needs, desires, and expectations, and the several guided discussion sessions revealed a suite of creative components the project might pursue. Project developers were on hand to contribute to and reflect on the deliberations, and to offer feedback regarding technological possibilities.

iDigBio was represented at the workshop by Nelson, Data Coordinator Shelley James, paleontology graduate student Sean Moran, and Jon Lauters, the newly retained developer at Florida State University that will serve as the iDigBio member of the development team and who will work closely with iDigBio’s cyberinfrastructure team at the University of Florida.