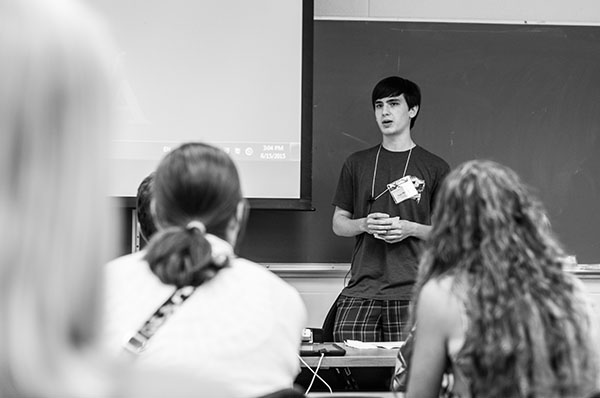 Press release from Delta High School at Cabrillo College:
Aptos, CA June 23, 2015 - Sage McGraw, a 12th grader at Delta High School, presented to a group of 60 scientists and K-21 educators at the University of Florida on June 15, 2015. The group gathered to attend a workshop titled "3D Digitization of Fossils for Educators & Citizen Scientists”. McGraw shared his experience of learning about science and conducting authentic scientific research through 3D printing technology in the classroom. “Being able to do stuff that I feel like actual scientists would do makes me sure that I want to be a part of the scientific community”, McGraw said.

The collaboration with the University of Florida started three years ago when Jason Tovani, science teacher at Delta High School, participated in a Panama Canal Project, a collaboration between University of Florida, Santa Cruz City Schools, and the Smithsonian Tropical Research Institute funded by the National Science Foundation. This project brought teachers from Santa Cruz City Schools, and Florida, to Panama to conduct paleontological fieldwork alongside University of Florida paleontologists. The purpose of the project was to provide teachers with fieldwork experiences in order to improve the teaching of science in middle and high schools.

Tovani leveraged his learning and connections gained from two Panama trips to teach a Paleontology course at Delta High School with the help of Sean Moran, a “STEM Content Specialist” from the University of Florida. Moran visited Delta High School three times over the course of the year where he led students through three different investigations on natural selection, the evolution of horses in response to climate change, and the miocene monster snake “Titanoboa”.

The Titanoboa investigation took advantage of modern technology to provide students access to rare fossils. Using 3D printed Titanaboa vertebra fossils, students were able to take precise measurements from the fossils and compare them to those of a modern anaconda. The comparison resulted in a prediction that Titanoboa was approximately 39 feet. The digitization and 3D printing of fossils brought Tovani’s paleontology class to life, and students began to feel like scientists. McGraw stated, "Throughout all of my schooling I had never felt like I was actually doing real science. In other science classes we would be learning about science that someone else had done, usually many years ago, and hundreds of thousands of people had already done exactly what we are doing. The results of our activities were already known. By doing something new, something that the outcome wasn't already known, it was really something that I will hold onto throughout my education from here on out."

In a previous investigation, PhD. student Victor Perez, brought 3D printed teeth from the ancient giant shark, Megalodon. Perez demonstrated how researchers take measurements from the teeth to predict the total length of the Megalodon by using formulas developed based on living Great White sharks. Students, including McGraw, measured each tooth and plugged the data into the formulas, but their results were messy. Students grappled with the results, concluding in the end that researchers have been predicting megalodon length using formulas that may not be as accurate as they had thought. Victor was surprised and said, “This is a new discovery that came into fruition from the efforts of these students, which further exemplifies the power of bringing real research into the classroom.”

McGraw’s interest in the sciences was renewed through his involvement in Delta’s Paleontology class. “The scientific research raises more questions than answers which is exciting to me”, McGraw stated. McGraw plans on majoring in a STEM (Science, Technology, Engineering and Math) field after he graduates from Delta High School in 2016.

Listen to a recording of Sage McGraw's talk.