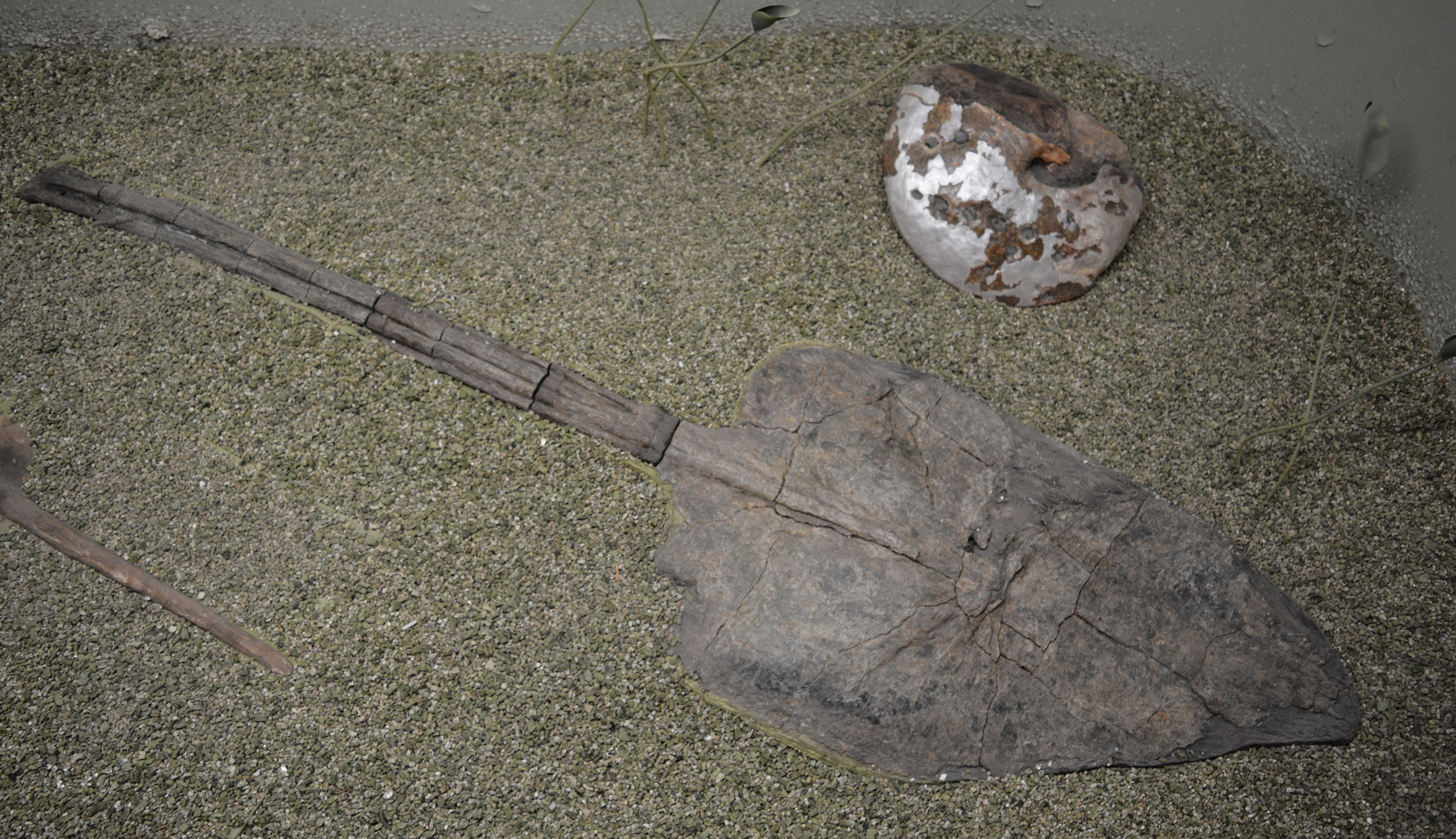 Article contributed by Bruce Lieberman from the Cretaceous World TCN

The giant cephalopod Architeuthis is an awe-inspiring creature of the deep.  This squid is little known because of its lifestyle and habitat, and for this reason, and its renown as a fearsome predator, discoveries of individuals washing up ashore generate significant interest among a broad range of individuals running the gamut from cephalopod biologists to the general public.  Any largely, and large (the biggest specimens are females ~ 13 meters long, including tentacles), gelatinous creature that can finish off a whale is bound to stimulate interest from neontologists and paleontologists alike.  However, sadly on the paleo- front giant squids have a depauperate fossil record, because they lack a prominent rigid skeleton and they primarily inhabit deep water.

This is not to say though that paleontologists never recover the remains of cephalopods perhaps comparable in size and life habit to the modern giant squid.  In fact, just such a creature is known to have inhabited the Western Interior Seaway that covered the central part of North America during the late Cretaceous period (~ 100-65 million years ago) and is the subject of our biodiversity spotlight this month.  Enchoteuthis melanae (formerly Tusoteuthis longa), sometimes called a “prehistoric sea monster”, is a massive extinct cephalopod.  Illustrated is University of Kansas, Division of Invertebrate Paleontology, Biodiversity Institute (KUMIP) specimen number 314494 (photo by Laura Mohr), which is a pen or “gladius” from the Cretaceous-aged Pierre Shale of Wyoming that also happens to be on exhibit at the University of Kansas Natural History Museum.  In actuality the specimen is assigned to an extinct clade, the Enchoteuthidae, more closely related to modern octopods than to giant squids.  Modern octopods have highly reduced, and sometimes paired, vestigial structures ultimately homologous to the gladius shown.  The specimen illustrated is ~ 1.4 meters long, and appears alongside an approximately 30 cm diameter ammonite for scale (part of a smaller gladii also appears in the bottom left of the image).  Even longer gladii of E. melanae are known that when pieced together stretch to ~ 1.9 meters.  The gladius of our extinct octopod E. melanae would have run the entire length of the mantle (the mantle is best interpreted for the purposes of this spotlight as the central mass of the animal sans arms) and was made of a cartilaginous-like substance.  If the beast had arms like a modern giant squid it would have been 30-35 feet long; however, if arm length is better modeled via comparison to closer phylogenetic relatives (that look more like modern cuttlefish), then it would have been a shorter but still impressive 10 feet long.  Irrespective of its actual size, E. melanae was clearly an important predator in this long vanished marine ecosystem that ran through the heart of North America during “the age of the dinosaurs”.

The Cretaceous Western Interior Seaway was replete with many different types of sea monster, including giant reptiles and fish, and several species of prodigious octopod (only 1 which was considered herein).  Sometimes pens like the one shown here preserve evidence of tooth marks attesting to the fact that Enchoteuthis had reason to watch out for even larger predators.  This provides the evolutionary converse to the famous poem by Jonathan Swift, and attests to the fact that throughout much of life’s history, as “naturalists observe, (beings) hath (larger beings) that on (them) prey; and these have (larger) still to bite ‘em; and so proceed ad infinitum”.

Thanks to specimens digitized by the Cretaceous World Thematic Collections Network (TCN), which is funded by the NSF ADBC program, and the fact that these data are now shared by our institutional website at the University of Kansas, as well as the websites of our partners and iDigBio, scientists throughout the world can more easily discover and explore information about the systematics, biogeography, and ecology of these ancient denizens of the deep.