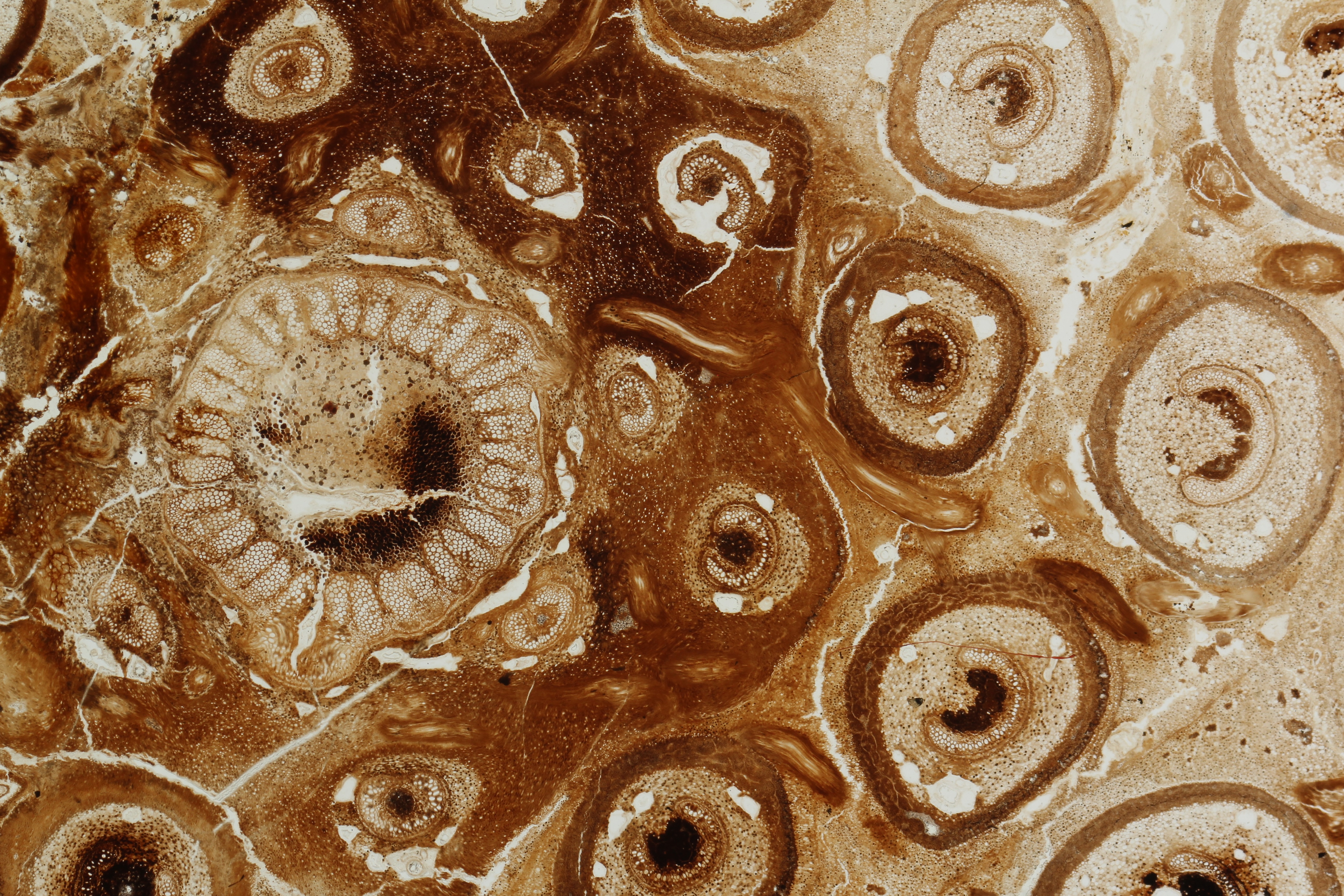 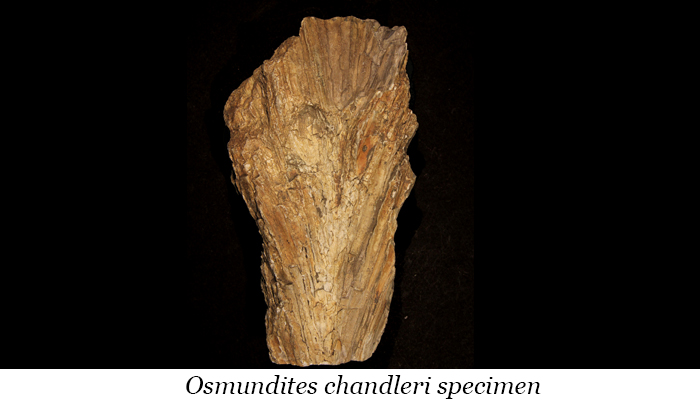 The Royal Fern family, Osmundaceae, comprises five genera and 16 extant (living) species (The Plant List, 2013). Several species are common garden plants, including royal fern (Osmunda regalis), cinnamon fern (Osmundastrum cinnamomeum),and interrupted fern (Claytosmunda claytoniana). Paleobotanists are familiar with this earliest extant lineage of leptosporangiate ferns in the fossil record, with its first appearance in the middle to late Permian (272–252 million years ago). Fossils help us track the diversity of species, morphologies, and ecosystems that this lineage has explored over geologic time. 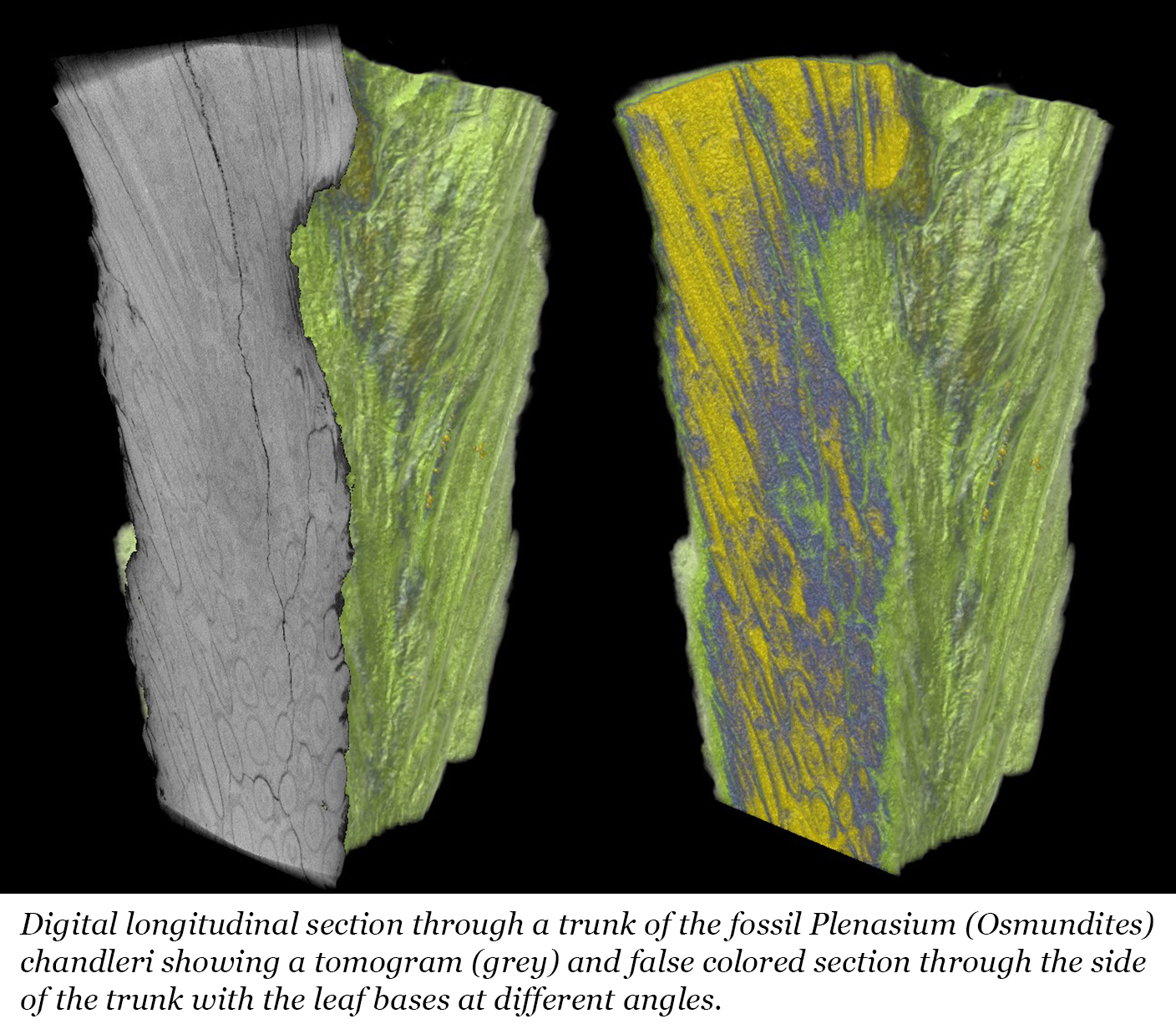 Plenasium
(
Osmundites) chandleri
from the Eocen
e of Oregon showing
central stele with xylem (x), leaf traces (lt) of vascular tissue diverging from the stele to go to
leaves; with roots (r) throughout and leaf bases (lb) t
phery of stem.

Reflected in the “royal” common name, the Osmundaceae commonly have robust vertical stems allowing them to tower, almost like small trees, above other fern families that are mostly small, epiphytic, rhizomatous, or herbaceous. However, in contrast to most plants with vertical self-supporting stems, Osmundaceae do not achieve this by producing yearly rings of wood! Rather than producing many stiff water-conducting cells, the central water-conducting tissue is relatively small (usually less than 1cm or half an inch), and the trunk is supported by numerous persistent roots and fibrous leaf bases (the portion of the leaf attaching it to the stem), and in many species the boundary between the stem and the free leaf bases is difficult to discern. When fossilized, the stems may become permineralized, that is, infilled by minerals that preserve the cellular detail, providing researchers rich information on anatomy and physiology, as well as data on when and where the group diversified. The size of the stem, how the water conducting cells are distributed and bifurcate between stem and leaf, and the structure of the leaf base are characteristics of stems that are used to distinguish among species of fossil and living Osmundaceae. These features can be used to place fossil stems in the fern “family tree” (phylogeny), as recently done by Bomfleur et al. (2017). 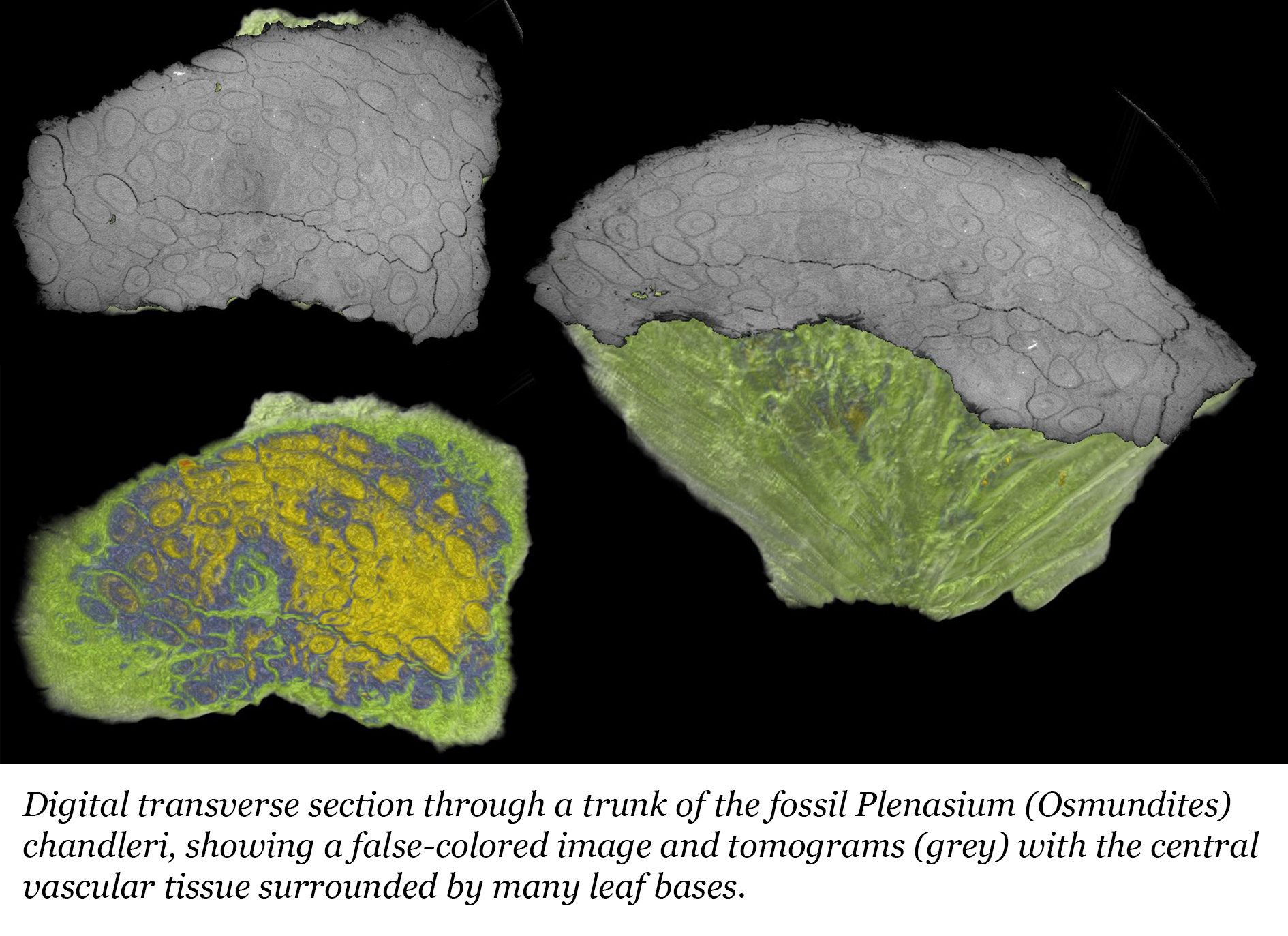 As part of the Pteridophyte Collections Consortium Thematic Collections Network, which is aimed at digitizing living and fossil ferns, horsetails, lycophytes, and extinct relatives, a fossil osmundaceous trunk from the University of Michigan Museum of Paleontology was imaged. Permineralized stems of Osmundites chandleri were originally described by Chester Arnold in 1952, and include trunks over 20 cm in length. Recently, Bomfleur et al. (2017) transferred the fossils to the modern genus Plenasium, concurring with a suggestion by U. K. paleobotanist Marjorie Chandler on the affinities of the fossils. The species is named after A.K. Chandler, who discovered the specimens in John Day Valley, Oregon. This taxon is Eocene in age, preserved in the famous Clarno Formation (ranging from 54 to 39 Ma). Traditional preparations include “thin sections," in which a narrow slice of the specimen is glued to a thick glass slide and ground down until it shows a single layer of cells. This preparation allows us to visualize and describe the detailed structure of the stem and leaf bases. We also imaged a portion of the specimen using micro-computed tomography, which shows the divergence of the leaf bases from the minute central axis. False color reflects the grey scale values of the scan, a factor of the different tissues (e.g. the thicker xylem and fiber cells tend to be darker) and how it was mineralized. 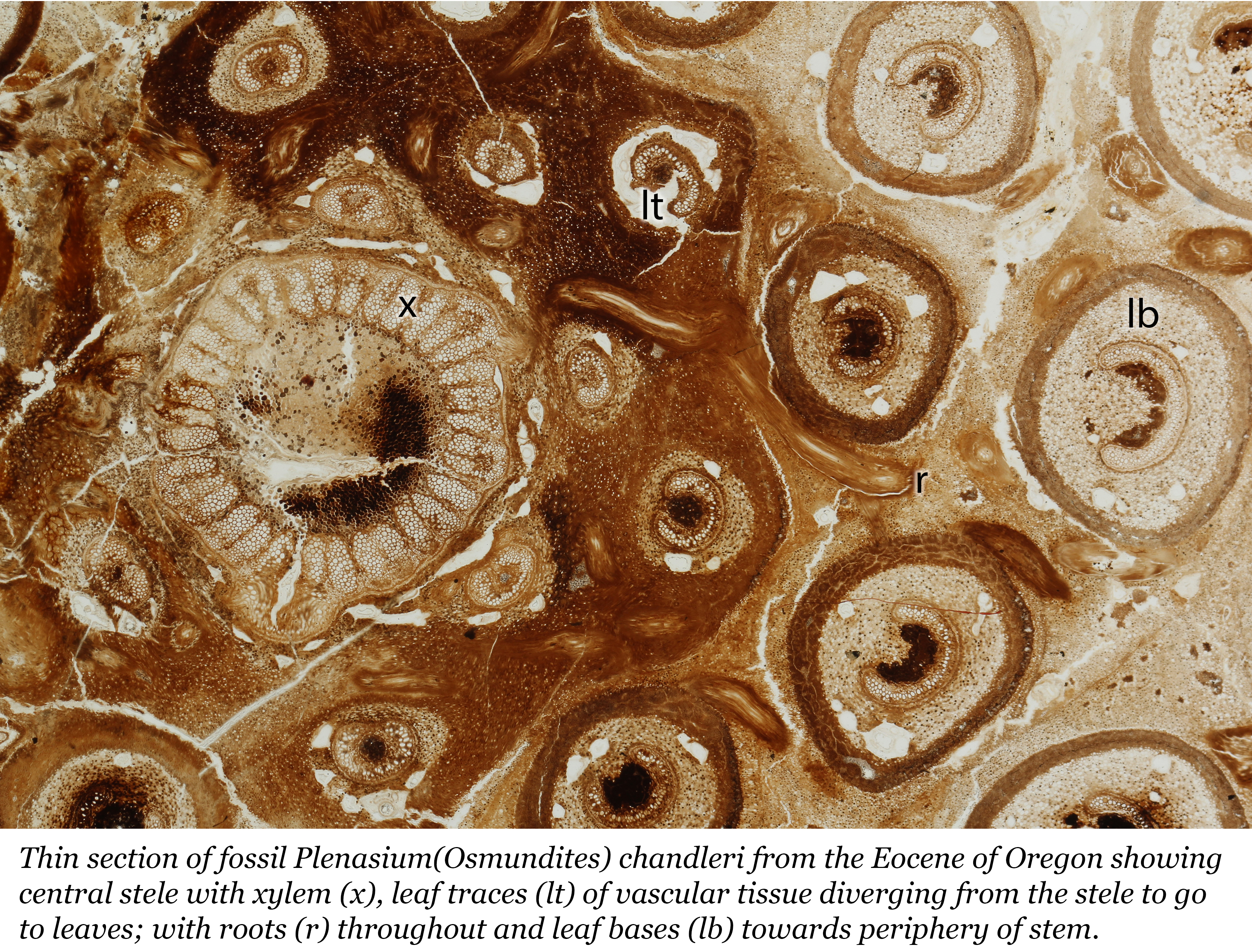 To discover extant and modern specimens from the Osmundaceae family, click here.