Cosmic Naturalism - Biodiversity of the Cosmos

We have some exciting news for all of you!

You may know of Cat Chapman, iDigBio's Biodiversity Informatics Coordinator. While that may be her day job, did you know that's not all she's up to? That's right! Cat's parallel job, which was top-secret up until today, is that of Cosmic Naturalist - she has dedicated her life to explore the cosmos in search of life among the stars, and today she has some breathtaking discoveries to share with the world!

Geared up with her star-class Exosuit and her Explorer class Vy'keen spacecraft, lovingly dubbed "The Prophecy of Death" (the Vy'keen have such a way with words!), Cat has traveled thousands of light years and has spent countless hours discovering and documenting the biodiversity of the cosmos to further our knowledge of what the universe holds for us. 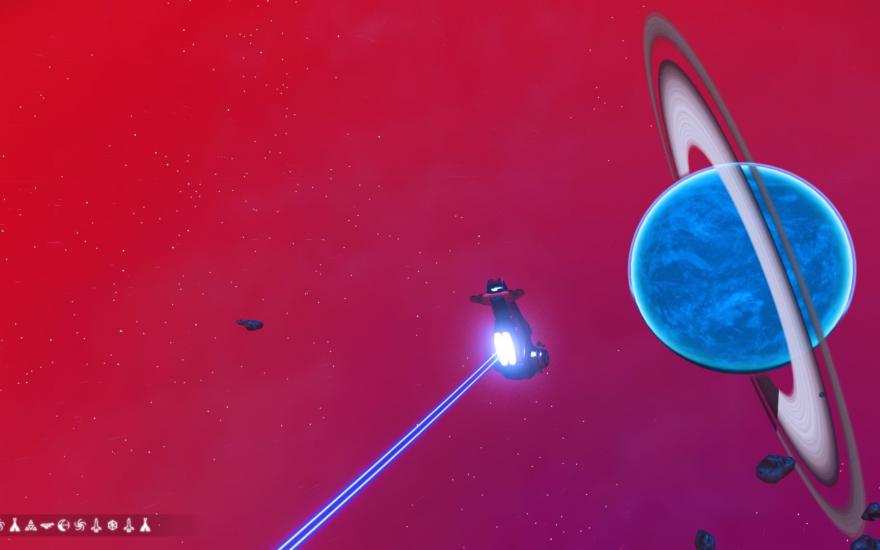 This endeavor has not been without challenge: during her travels, Cat has had to defend herself from violent spacefaring pirates, fend off dangerous flora and fauna, and of course survive in extreme environments; some worlds are plagued by superheated rainstorms reaching temperatures of over 176ºC (350ºF), howling blizzards with temperatures plummeting to -128ºC (-200ºF), radiation storms, noxious gas storms, anomalous boundary failures, firestorms, nuclear extermination events, and of course the ever-present Sentinel forces, comprised of mysterious mechanical sentries enacting violence on anyone they deem to be a threat to the planets they inhabit (how they determine who is and isn't a threat is seemingly random, though it is said that they answer to a mysterious Atlas).

Thankfully, despite all of these extreme trials, Cat has returned to Earth in safety and in health. Below, she will describe some of her favorite discoveries as she traveled through the cosmos!

(Note for any fellow Travelers out there: clicking on any of the photos will take you to the full-resolution image, which includes coordinates in the lower-left corner! All of these travels took place in the Euclid galaxy.)

Greetings everyone! We will start our journey in the Gatisen solar system. Gatisen is comprised of six planets; our creature of interest resides on planet Datoweym Mibo. 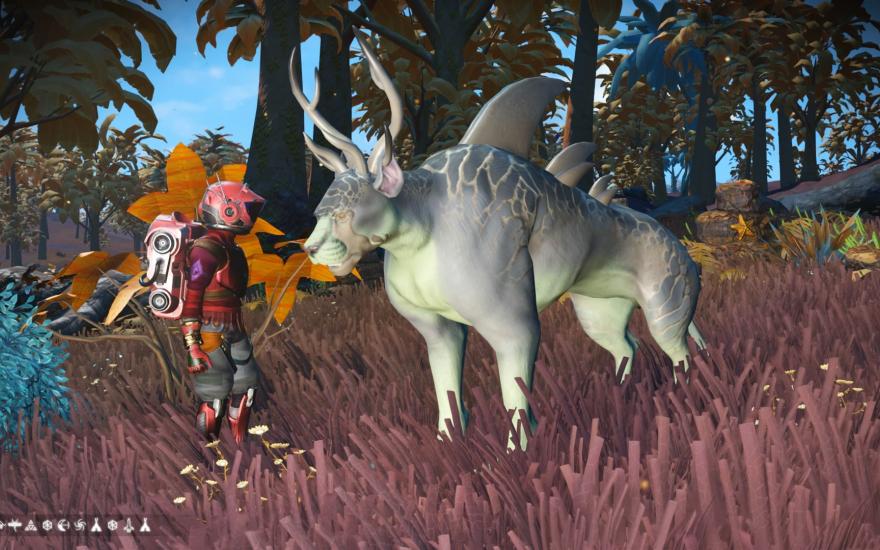 Xenomorpha vombaharea is a large, quadraped mammaloid creature from Datoweym Mibo. Its body is feloid, with padded paws and retractable, calcified claws, and a cat-like head adorned with antlers. Along its dorsal side are large fins like that of a shark; its skin is a pale grey-blue gradient, and its tail is small and thin. 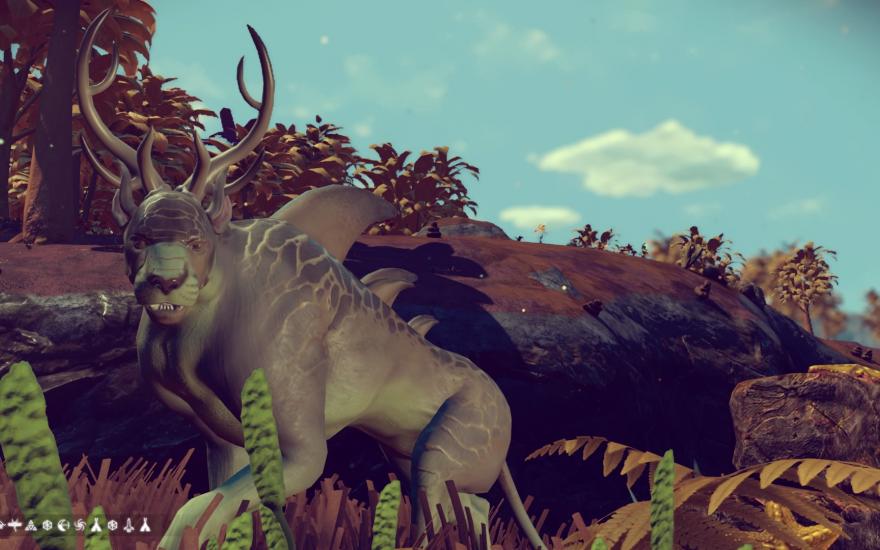 Xenomorpha vombaharea makes its home in the fields of Dayoweyn Mibo. An apex predator, this creature is dangerous and will attack on sight. I was fortunate enough to tame one of these creatures for further morphological and behavioral analysis, but it wasn't without being scratched a few times. Thankfully, my Exosuit protected me from fatal damage.

The sensory organs of X. vombaharea appear unusually undeveloped for an apex predator. It seems to compensate by lashing out with extreme and indiscriminate violence. Xenomorpha vombaharea will seek out larger creatures, preferring to make the one occasional kill to feed themselves for months.

Slashina has proved to be an excellent companion. I have equipped them with mining lasers so that they may help me extract resources needed for survival on these alien worlds. Slashina also allows me to ride them, as one would a horse, when they are in the mood. Sometimes they will not listen to my directions, however, and will instead travel where they please. Our journey now takes us to the Ekkaistys system; Ekkaistys is comprised of four planets. We will be focusing on creatures found within planet Teha.

Bizarus platijeae is an anomalous creature found on the fractured planet of Teha. 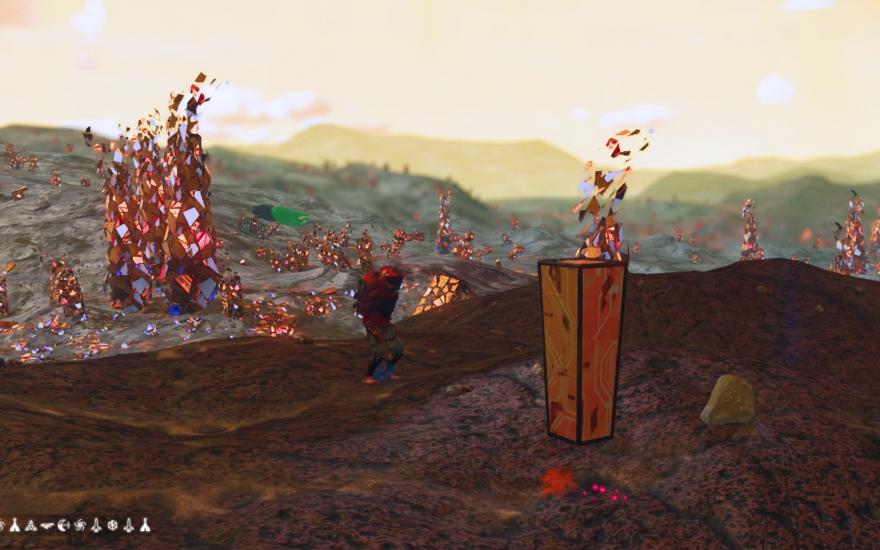 Bizarus platijeae are large, anomalous creatures resembling a long, metallic, rectangular shape - a bit like a Tetris "line piece". They levitate approximately one meter off the ground; the mechanism for their levitation is unknown. The average mass for Bizarus platijeae is 129kg.

Bizarus platijeae lurks in the endless mounds of discarded shells on Teha. Brain scans are unable to capture the true essence of this creature's simple happiness. A plague upon stranded adventurers, as they feast upon di-hydrogen crystals - crystals often refined into launch thruster fuel for entry-level starships. The highly reactive saliva of B. platijeae dissolves di-hydrogen crystals without any need to chew. Curiously, while these creatures lack "skin" in the sense that we know it, and rather have something resembling a metallic exoskeleton, these creatures burn in the sun.

Another anomalous creature is Fantasticus ursaobium, from the mechanical planet Dary X in the uninhabited (by industrialized species, at least) Ilango VII system. Dary X is a strange, distant, and unforgiving world, yet the curious, highly intelligent, and delightfully playful F. ursaobium species enthralled me enough to attempt to tame and adopt a member as my own. Happily, I was successful, and an F. ursaobium has joined my little crew of spacefaring companions. I have named them Tropista. Curiously, after some time with Tropista, I was delighted to find that they had laid an egg, giving me yet another F. ursaobium - I have named them Tempo-Tempo, and they have also joined me on my cosmic adventures. Curiously, Tempo-Tempo and Tropista are identical in appearance, suggesting the possibility of asexual reproduction within this species. I would perform a genetic analysis, but my attempts at collecting a cell sample have proved fruitless - there is no getting through their metallic "skin", much less collecting any samples!

Encountered amidst the endless confusion of planet Dary X, F. ursaobium display an uneasy caution in the face of novelty, untrusting of strangers and strange situations - until you offer them ion batteries as treats, of course!

Group feeders, they collect "leaves" from the local "plantlife" and eat only when the whole herd can be satisfied, The average size of this species is 119kg, and their gender is radical/None.

The appearance and behavior of these creatures is akin to an alien, robotic dog, and approximately the size of a small horse. My two companion F. ursaobium are attentive, playful, and generally happy little critters, always running around gleefully and occasionally digging up flowers as "gifts" they bring to me. 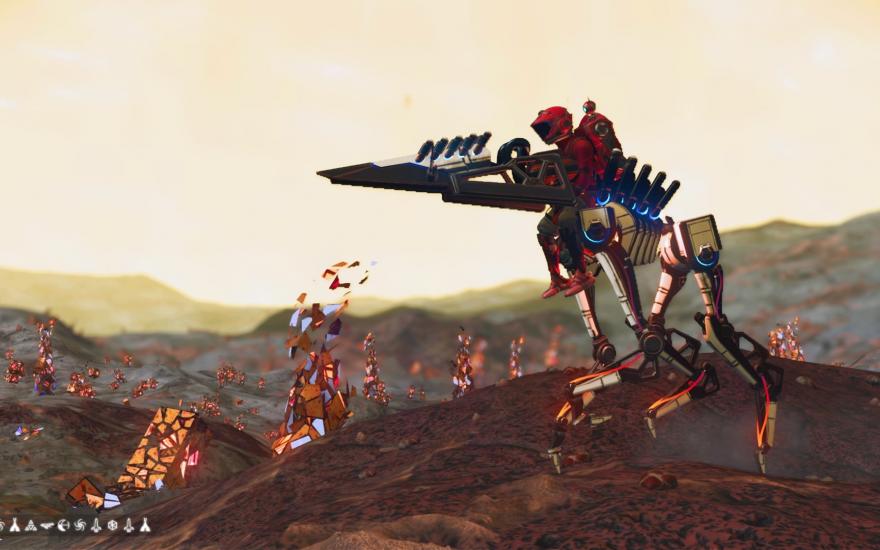 Our journey today ends at my home-away-from-home, planet Kobann, in the Camposus system. Kobann is a flourishing planet, with Earth-like conditions ideal for Earth-like life. With its ample seas, red grass, and friendly wildlife, Kobann is truly a paradise planet, save for the occasional Sentinel forces. Thankfully, Sentinels on Kobann are harmless, so long as they don't witness you mining materials. 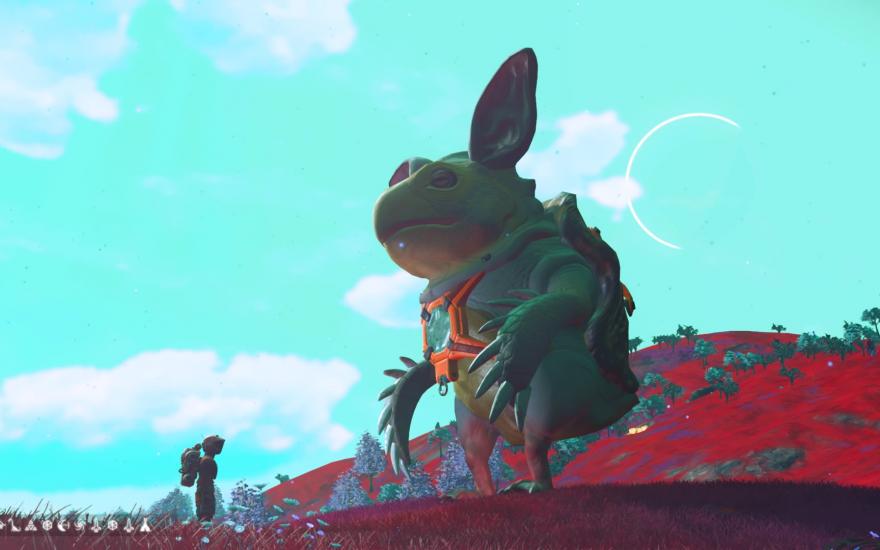 Coleavis olivaceus are gentle giants, and named for their green-skinned, beetle-bird hybrid appearance. They are approximately six meters tall on average, and weigh 265kg. Their large heads are adorned with curious red eyes, large rounded ears, and a massive beaked mouth that they use to eat, almost exclusively, Star Bramble.

Coleavis olivaceus are found wandering the temperate grasslands of Kobann. They are slow moving, passive, gentle creatures, content to focus only on plantlife. They have been observed to mate for life, and their species follows a male/female gender spectrum, though there are "alpha" subgenders within this spectrum that I have yet to document fully.

I have two C. olivaceus in my companion registry - Heko and their offspring, Uka-Uka. As Heko's egg, like Tropista's, was unexpected, I first assumed the possibility of asexual reproduction in this species. However, as Heko was an adult when I adopted them, there is the possibility that they had mated before I adopted them. Furthermore, Uka-Uka significantly differs in appearance from their birthing parent; for example, Uka-Uka is much larger. These differences suggest that there may be genetic mixing in play. 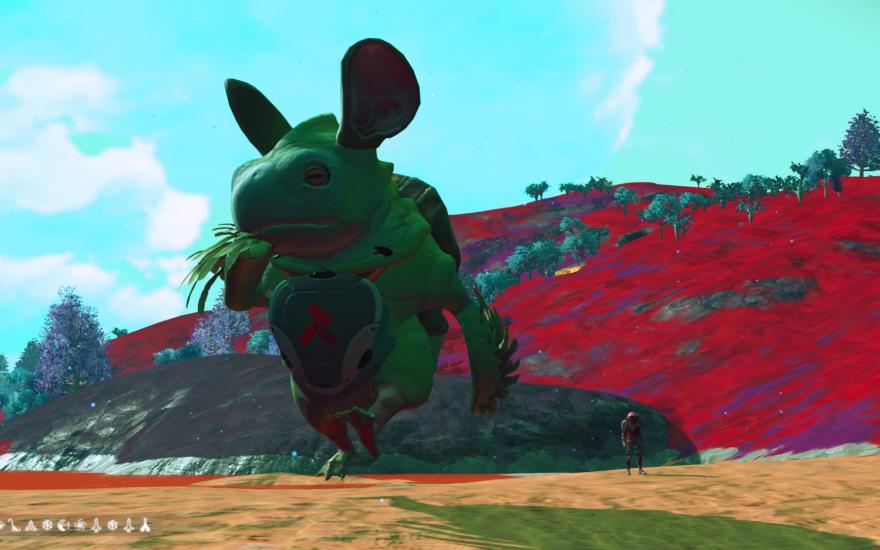 Hydra bluaneae are native to the planet Omuts 55/N5, within the Kugkuit-Upid solar system. As Omuts 55/N5 had extremely dangerous superheated rainstorms, when I encountered this fascinating species, I tamed and adopted one quickly before returning to Kobann to study this species further. I named my adopted H. bluaneae Iryui-Iryui. Hydra bluaneae are large creatures, ranging from three to six meters in height - not including the long neck! They have a dinosaur-like appearance, resembling the extinct Apatosaurus from Earth. However, despite their size, they only weigh, on average, 134kg - I am not yet sure what it is about their physiology that allows them to be so large, yet so relatively lightweight.

Hydra bluaneae are also found wandering temperate grasslands of their home planet of Omuts 55/N5 (believe it or not, they do exist despite the recurring superheated rainstorms!), which is why I thought Kobann's temperate grasslands, where I have built a home, would be a suitable environment for my adopted creature.

Hydra bluaneae are large, gentle creatures, though they are naturally timid. They are reluctant to approach strangers, but they display complex social behaviors within their herd. Delicate feeders, they nibble selectively at local flora, ensuring they never entirely strip an area completely of foliage. Their blood is valuable with local civilizations, though I have yet to determine exactly why - my knowledge of the Korvax language needs improvement before I can understand why exactly the blood of H. bluaneae is so valuable. 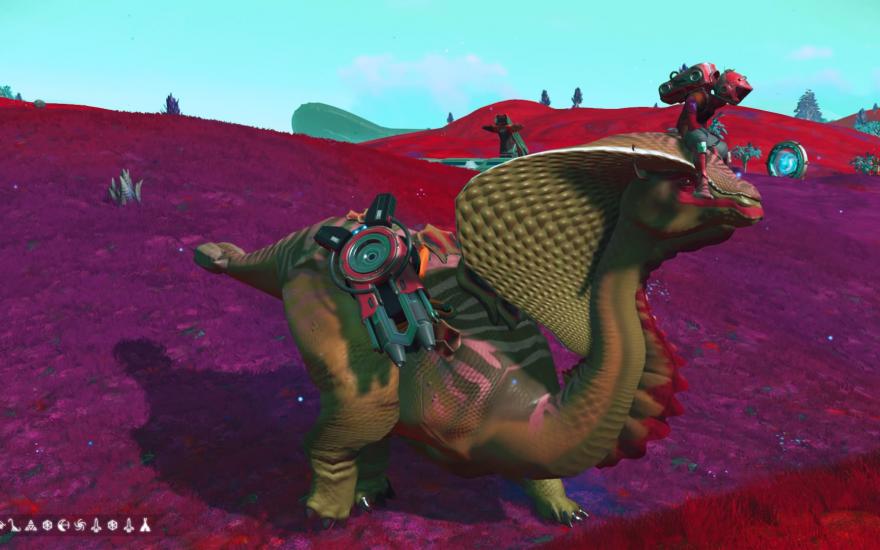 You are limitless in your potential! Remember, it is No Man's Sky out there - the stars are yours; the stars are ours. I hope you enjoy some additional snapshots from my adventures down below!
(Happy April Fool's Day from iDigBio! :) ) 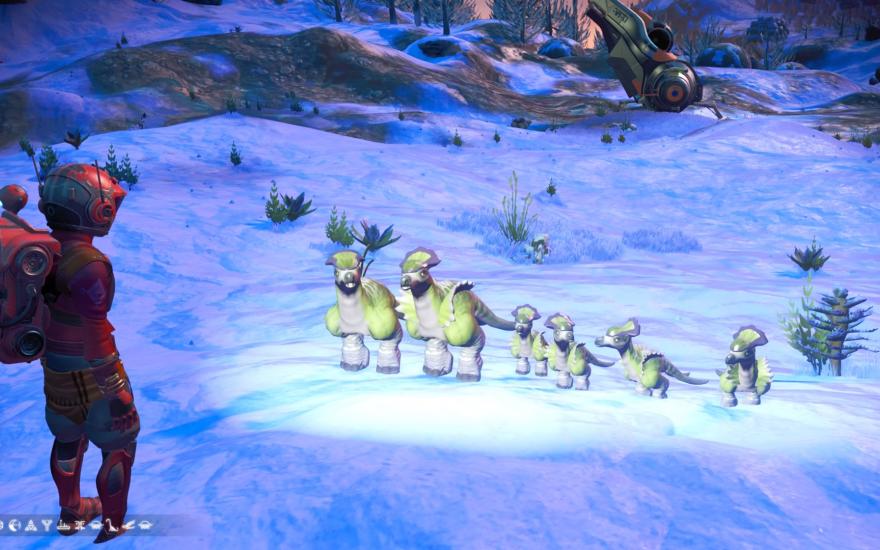 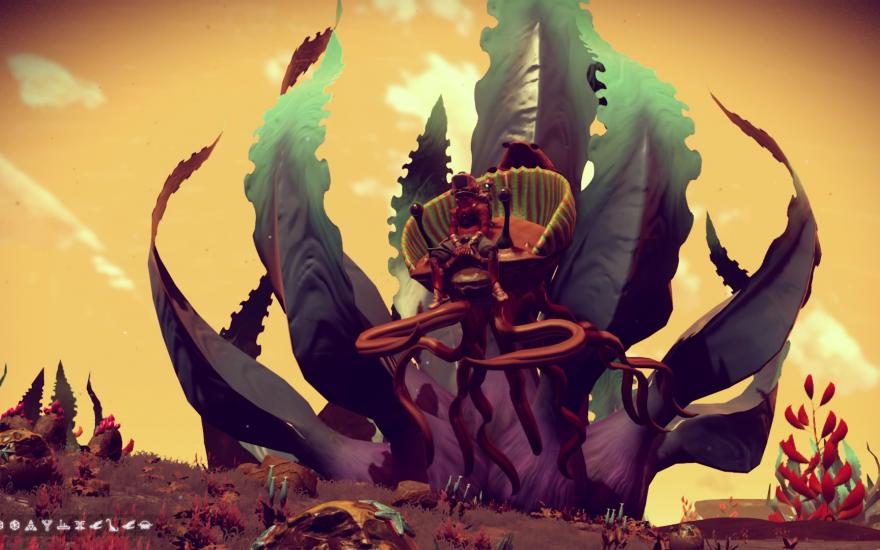